Mayor Kim refuses to sign the cable car development agreement. His young son, Kim Sol, watches him argue with the other villagers who know 100% agreement is required for any of them to be paid. After the other villages leave, Kim Sol suggests his father sign to stop the fighting. His father declares he’s right and the others are wrong. Kim Sol and his father are horrified to find the beehives poisoned and all the bees dead. Kim Sol’s father freaks out declaring he can hear the dead bees buzzing. Upset, Kim Sol signs the agreement with his father’s stamp. He takes the agreement to the men. Before he knocks, he overhears the men talking about poisoning the bees and killing his mother. The door swings open. Kim Sol claims he heard nothing. The men take the signed agreement and tells him to tell no one. Kim Sol flees. The men turn in the signed agreements from the villagers to the cable car development planner. He informs them the project has been canceled. The men can’t believe it. The development planner promises he’ll try again one day. The men freak out and demand their money. There is no money to give. The villagers leave. 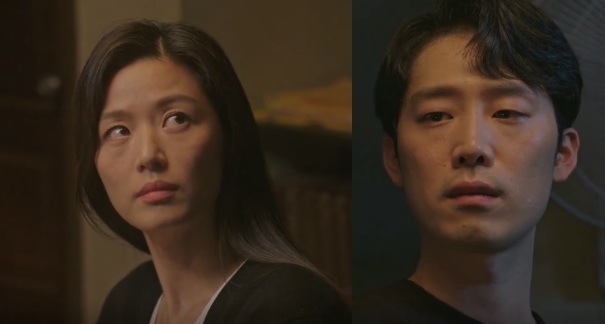 Seo Yi Gang (Gianna Jun) tells Ranger Kim Sol that he is the mountain murderer. He denies it. Yi Gang says she’s going to police and tell all. He guesses she has no proof. He tells her if he were the murderer then she’s a fool for coming to his house alone. He wonders if she has a death wish. But he won’t kill her because that would create evidence that she doesn’t have and desperately needs. He tells her to talk to the police. They won’t believe her.

Ranger Jung and Team Lead Ranger Park asks Yi Gang if she was able to plant the tracking device. She confirms she put the GPS in Kim Sol’s backpack.

Yi Gang tells the rangers they must track Kim Sol for now he will destroy any remaining evidence.

The next day at the ranger station, Ranger Jung and Team Lead Ranger Park call Yi Gang and report Kim Sol is indeed heading into the mountain. They track and fellow Kim Sol.

Branch Chief Jo is released from prison. The police tell him not all the charges have been cleared and he needs to stay in the local area. His daughter brings him tofu to celebrate getting out of prison. She tells him the mountain has cost him enough. He needs to come home with her. He tells her he must go up the mountain one more time. 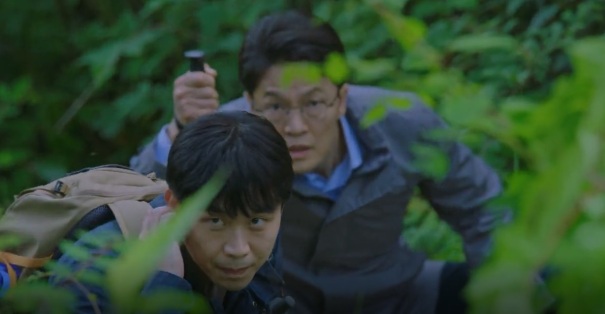 Hyun Jo enters the remote cave shelter. Kim Sol is waiting for him. He walks through Hyun Jo. Kim Sol laughs that Hyun Jo stayed on the mountain to capture him. He admits he’s the mountain murderer. Hyun Jo asks why. Kim Sol declares they didn’t remember what really happened in the village.

Kim Sol decides he’s going to commit suicide on the mountain. He hears the bees buzzing.

Present day…Kim Sol declares he and Lee Se Wook killed them one by one. The buzzing of the bees stopped. Hyun Jo says the mountain doesn’t support Kim Sol. His visions were to stop the murders. If only he’d seen the truth about Kim Sol sooner. Kim Sol counters that Hyun Jo’s mountain didn’t reveal the truth so the mountain is on his side. Kim Sol shows him the tokens of each murder. He pours gasoline on the items and lights them. Hyun Jo knows the evidence is going up in flames. He disappears.

At the hospital, the family prepares to have Hyun Jo taken off life support. They cry at his bedside. Hyun Jo’s father gives the doctors the signed form to remove Hyun Jo from life support.

Ranger Jung and Team Lead Ranger Park spot the smoke coming from the remote cave shelter. When they arrive, the cave is filled with smoke and the evidence is burning. They believe they are too late. They report the evidence has been burned. Yi Gang can’t accept this is the end. She gets her drone from her locker. She tells Branch Chief Jo too many have died. There has to be more evidence. She spots ghost Hyun Jo going to mark at the top of the mountain. The drone battery fails and they lose signal. Branch Chief Jo tells her they must go to the mountain. 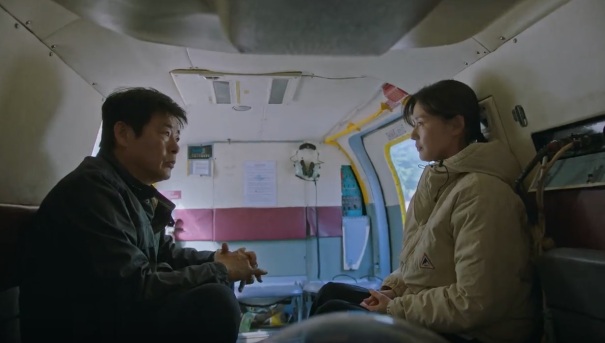 In the ranger helicopter, Yi Gang and Branch Chief Jo watch the mountain go by. The helicopter lands. Branch Chief Jo and Yi Gang exit. He carries her on his back. They find Hyun Jo putting another stick at the marker. He turns and sees them.

At that exact moment, the life support is turned off in the hospital. 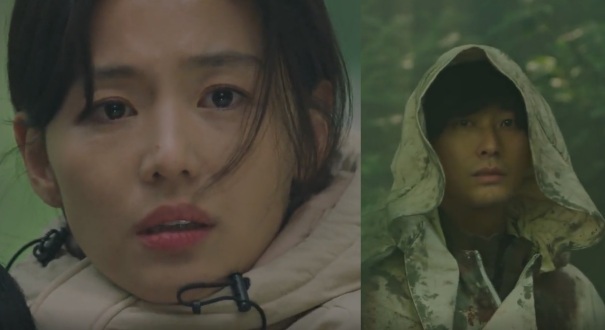 The forensic team pulls the cell phone records from the cell phone. It was a trail of conversation between Kim Sol and Lee Se Wook.

The police go to Kim Sol’s house to arrest him. Kim Sol drives up and sees the police cars. He drives away.

Yi Gang arrives at the hospital. She goes to Hyun Jo’s room. His room is empty. She cries.

Yi Gang returns to the ranger station. The lights turn off. Kim Sol comes up behind her and knocks her out. 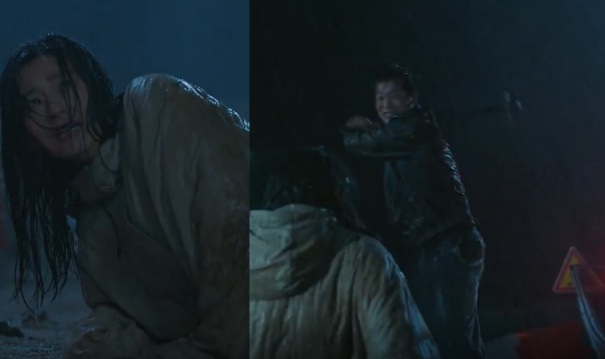 In the pouring raining, Kim Sol drives Yi Gang to the mountain. He yells that she’s ruined everything. He declares the mountain wanted everyone he killed dead and she’s next. He laughs that he killed her grandmother too. Yi Gang didn’t see that coming. She throws herself out of the car. Kim Sol stops the car and looks at her body on the ground. He picks up a hammer and declares he can kill her here too. He turns her over. She hits him. She calls him delusional. Kim Sol gets to his feet. He declares the murders are what the mountain wanted. He raises a hammer to kill her. A rock slide breaks loose. Yi Gang looks at the rock pile as sees Kim Sol under a boulder. He stares at her then passes out. Yi Gang sighs in relief.

Ranger Jung walks to the temple to pray for Yang Sun. He remembers moments with her. He cries remembering promising to pass the promotion test. Now he has but it doesn’t have the same meaning with Yang Sun.

Ranger Jung goes to the mountain and takes wildflowers for Yang Sun.  He puts his team leader badge at her marker. He tells her he finally did it. He tells her he’ll see her later. He looks over the vista.

Team Lead Ranger Jung arrives at the ranger station where Commander Ranger Park tells him he’s late and it’s amazing he passed the exam.  Ranger Jung walks to Ranger Park’s desk and flips his nameplate. The note there are interviews today. Ranger Jung steps away.

Yi Gang is part of a 3-person interview panel for ranger candidates. Yi Gang tells a nervous candidate (lottery ticket girl) that mountains have hearts. Rangers are there to keep everyone on the mountain safe.
Yi Gang tells the girl to release her burdens (Yang Sun died saving her).

It’s early morning New Year’s Day, Ranger Park rouses Ranger Jung from sleep. Ranger Jung grumbles and gets up. As he strides down the hallway, Ranger Park joins him. They exit the building knowing Yi Gang will be there soon. A taxi pulls up. Yi Gang GETS OUT OF THE TAXI (no wheelchair). She smiles. They toss her a backpack. They head to the trailhead.

They head to the top of the mountain to corral the crowds waiting for the first sunrise of the new year. Yi Gang spots former Branch Chief Jo and his daughter. Branch Chief Jo grouses it is his first time watching the sunrise for pleasure.

As Yi Gang cries, the nurse tells Yi Gang that Hyun Jo is breathing on his own and in a different unit.

The sunrises over the mountain. The crowd cheers. Hyun Jo and Yi Gang know his visions are done, now they have their lives to live as they choose.

The final answers are revealed. Writer Kim Eun Hee revealed the complete backstory of black bridge village and how a young Kim Sol learned certain villagers killed his mother and watched his father flip out when his bees were poisoned by those same villagers. The inability to do anything as a child drove him to try to commit suicide when an adult. A lost Corporal Kim stumbled across his path just as Kim Sol was about to drink the poisoned yogurt. When Corporal Kim didn’t remember that Kim Sol’s father was dead because of actions his father, Kim Sol snapped and decided that could not be tolerated. He gave Corporal Kim the poisoned yogurt and the mountain murderer was born. Kim Sol felt justified killing on the mountain. Yi Gang figured out that Kim Sol was the mountain murderer, but the securing evidence was a challenge. Ranger Jung, Ranger Park and eventually Branch Chief Jo all worked with Yi Gang to find the evidence needed. Furious Kim Sol kidnapped Yi Gang with the intent to kill. But the mountain’s rock slide stopped him forever from committing more murders.

Kang Hyun Jo (Ju Ji Hoon) surprised in the epilogue.  When taken off life support, he began to breathe on his own. He had a full recovery.

Was my Wish List for the final episode Granted or Denied? 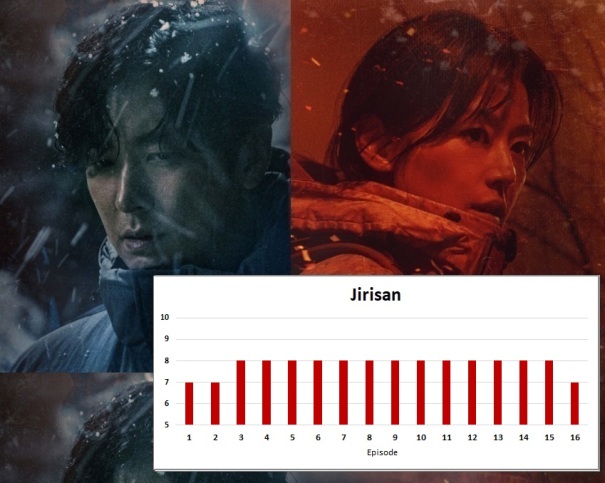