Background. It’s a dystopian South Korea. Homeless and poor abound. The public has little faith in the justice system and with good reason, it is corrupt and slanted toward the rich and powerful. One man, Judge Kang Yo Han (Ji Sung), fronts a reality TV show that has a live court with the general public able to vote guilty/not guilty via an app on their phones. Judge Kang is rich and has powerful frenemies. His assistant judges are Judge Kim Ga On (Jin Young) and Judge Oh Jin Joo. The three of them hold forth from the the TV show’s circular courtroom with massive monitors behind them.

Forces of greed and power include the Social Responsibility Foundation headed by Chairman Jung Sun A (Kim Min Jung). Ostensibly the Foundation’s mission is to lift up the poor and homeless. Next is the Ministry of Justice Chief Cha who wants Judge Kang to take direction from her. President Heo is a former actor with a love for the theatrics and never feels he is a genuine power. He’s right. Chairman Min of the Minbo company and media mogel Chairman Park (and their wives) round of the powerful that use the Social Responsibility Foundation for other than the publicly stated purpose.

Judge Kim Ga On’s best friend is Detective Yoon Soo Hyun (Park Gyu Young) who professes her love but he doesn’t reciprocate, not wanting to destroy their friendship with romance, though he cares deeply for her. Judge Kim’s mentor is Supreme Court Justice Min who believes Judge Kang is more than meets the eye. Judge Kim investigates his boss with the promise to share his findings.

Episodes 8 – 9. After the shock of learning that the swindler that destroyed his father (who later committed suicide) and mother (who died of a broken later shortly after) is NOT in prison, but an imposter.  Yo Han tells Ga On the justice system is flawed and easily manipulated by the rich and powerful. Ga On yells his rage.

After murdering the former puppet chairman, Sun A is named the next Chairman of the Social Responsibility Foundation. President Heo, Chairman Min, and Chairman Park clap at the to event to celebrate. Sun A smiles knowing she can now weld her power openly. President Heo’s speech is designed to incite anger against foreigners who he claims dilutes the purity of the country under the guise of “law and order”.

Sun A is thrilled to rub her new position as public support for the live court show in Yo Han’s face. He’s angry to see the cross necklace she stole around her neck. He shoves her against a wall, takes the necklace then starts to choke her. Ga On enters the office and pulls Yo Han’s vice gripe off Sun A’s throat. She leaves loving the passionate reaction she elicited from Yo Han.

Sun A encourages Judge Oh Jin Joo to step out behind Yo Han’s judicial shadow.

Ministry of Justice Chief Cha decides Sun A must be investigated.

Soo Hyun meets with Elijah, Yo Han’s niece who has a crush on Ga On. Soo Hyun shares some of Ga On’s backstory. The young women softens her jealously and realizes Soo Hyun is Ga On’s true friend.

Soo Hyun, Justice Min and Ga On meet to discuss the decline they are witnessing in the justice and police systems. Justice Min wants Ga On to commit to exposing Yo Han.

Yo Han brings Ga On to meet his team that has worked to bring down the criminals in the previous court cases.

Ga On realizes the Yo Han knew that Ministry of Justice Chief Cha arranged for the swindler to be replaced in prison. Yo Han counters that Ga On needed to learn the truth in person, not from a report.

Ga On decides to align himself with Yo Han and walks away from Justice Min. Results are what matter and the justice system cannot be trusted to deliver justice anymore.

Soo Hyun drives Elijah home. She pulls over when to handle a gang beating a man. Afraid for Soo Hyun, Elijah calls Yo Han. He rushes to the location and interjects himself. Things gets dicey and Ga On has to intercede.

The next at work our trio of judges are forced to agree to a PR campaign of Sun A’s making. Alone with Sun A, she suggests if Yo Han worked with her, their power would be substantial. Yo Han dismisses the idea.

We learn that Yo Han’s brother Isaac (Elijah’s father who died in a fire) elicited a promise from a young Yo Han not to hurt innocent people and the cross necklace symbolized that promise. Yo Han tells Ga On that no one is truly innocent.

The trio of judges have a PR photo session with a beaming Sun A watching.

Yo Han tells his team to leak Sun A’s background to Ministry of Justice Chief Cha. 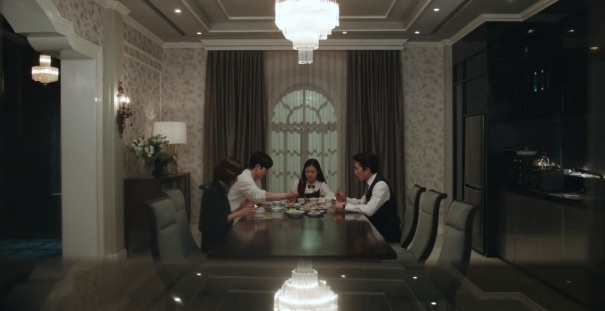 Elijah surprises Yo Han with a demand that he come home for a family dinner. Yo Han cancels his appointment and dines with Elijah, Ga On, and the housekeeper. It’s a lovely time for all.

Yo Han tells Ga On they can find out where the swindler is being held IF they interrogate the information from Ministry of Justice Chief Cha’s secretary. 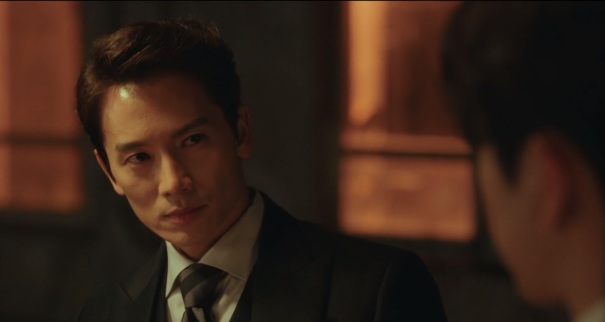 Ga On ponders revenge against the swindler. He talks to Soo Hyun about doing something illegal but doesn’t provide specifics. She retorts she’d arrest him. Ga On claims she won’t need to.

The next day, Ga On deposits boxes of cash in front of the homes of other citizens the swindler financially destroyed. He smiles in satisfaction at the tears of joy from the swindled families.

Ga On joined Yo Han but hasn’t blackened his soul. Writer Moon Yoo Seok walked the fine line – have Ga On join Yo Han’s team but allowed the noble man not extract physical revenge against the swindler that destroyed his family. Sun A’s need to needle Yo Han borders is obsessive. She wants to bring Yo Han to his knees. He refuses. The game is on.

Judge Kang Yo Han (Ji Sung) revealed his team to Ga On. I was relieved to see him reveal more of his backstory and quest to Ga On. How else could Ga On join him as a willing participant? Yo Han and Sun A continue to fascinate. Yo Han is an angel in comparison. I was relieved to see Yo Han strip the cross necklace from her and restore it to his wrist. Knowing the backstory (his brother’s Isaac eliciting a promise from a young Yo Han not to hurt the innocent) only strengthen the value of the touchstone. Yo Han was spot on when he called Sun A “a petty thief that doesn’t know who broken she is”. But she’s a cobra and will strike.

Judge Kim Ga On (Jin Young) joined Yo Han’s team but with limits. Of course, he wanted to extract revenge against the swindler that ripped off his father. But he couldn’t do physical harm to the man. Thankfully Yo Han interceded and showed Ga On and the swindler’s family the swindler would choose money over family or humanity. I liked that Ga On pointed out the swindler could be used against Ministry of Justice Chief Cha. I enjoyed the family meal that Ga On facilitated.

Detective Yoon Soo Hyun (Park Gyu Young) is worried about Ga On. She isn’t happy at Ga On’s growing closeness with Yo Han. Her bonding with Elijah was good.

Chairman Jung Sun A (Kim Min Jung) is obsessed with Yo Han. Her power wasn’t as evident these episodes as the previous two. Instead we saw her obsession with Yo Han and willingness to approach him with the inevitable rejection. She appeared to be willing to take that…for now. Using Judge Oh was predictable, but Yo Han sowed the seeds of discontent that Sun A leveraged.

The fourth song of the OST is “The Nights” by HuckleBerryfinn.