Background. It’s a dystopian South Korea. Homeless and poor abound. The public has little faith in the justice system and with good reason, it is corrupt and slanted toward the rich and powerful. One man, Judge Kang Yo Han (Ji Sung), fronts a reality TV show that has a live court with the general public able to vote guilty/not guilty via an app on their phones. Judge Kang is rich and has powerful frenemies. His assistant judges are Judge Kim Ga On (Jin Young) and Judge Oh Jin Joo. The three of them hold forth from the the TV show’s circular courtroom with massive monitors behind them.

Forces of greed and power include the Social Responsibility Foundation headed by Chairman Seo and able executive director Jung Sun A (Kim Min Jung). Ostensibly the Foundation’s mission is to lift up the poor and homeless. Next is the Ministry of Justice Chief Cha who wants Judge Kang to take direction from her. Her husband is in the inner circle of power. Her son Lee Young Min is a jerk who enjoys his temper and beating those that he imagines slights him. President Heo is a former actor with a love for the theatrics and never feels he is a genuine power. He’s right.

Judge Kim Ga On’s best friend is Detective Yoon Soo Hyun (Park Gyu Young) who professes her love but he doesn’t reciprocate, not wanting to destroy their friendship with romance, though he cares deeply for her. Judge Kim’s mentor is Supreme Court Justice Min who believes Judge Kang is more than meets the eye. Judge Kim agrees to investigate his boss and share his findings.

Second Court Case. Assault case against Lee Young Min for his mistreatment of three workers in an eatery. Ministry of Justice Chief Cha is horrified Judge Kang puts her son on trial. She gets the prosecutor on her side. She pays off the three workers. During the live court, the prosecutor declares the defendant has reached settlement with all three workers and cannot be prosecuted. Recovering from his wounds, Judge Kim watches knowing the volcano tempered Lee Young Min may walk away. But Jung Kang turns the tables and asks the public if anyone has had physical encounters with Lee Young Min. The video testimony streams in as one person then another then another reports on Lee Young Min’s cruelty. Jung Kang declares to the prosecution that Lee Young Min is a repeat offender and must be prosecuted as such. The public loves it.

Judge Kan offers Ministry of Justice Chief Cha a way to save her son. She must publicly admit taking bribes to prosecute an innocent man earlier in her career. Deciding to save herself, she declares to the public that her son is not above the law and must be punished as any criminal would be. Her husband and son can’t believe her betrayal. Judge Kan isn’t surprised. At the live court sentencing, Lee Young Min is sentenced to flogging. The sentence of beating with a stick is difficult to watch. The public loves it. 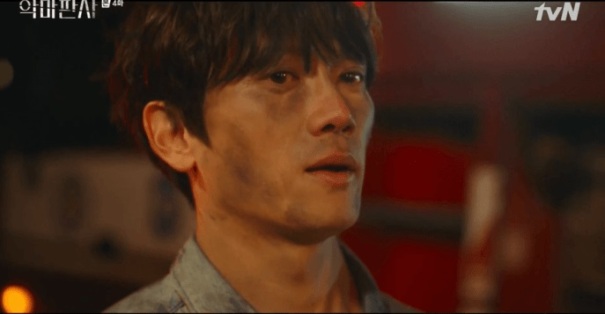 Judge Kim recuperates from the bomb blast in Judge Kan’s house. Based on comments from the housekeeper, Judge Kan’s niece, and others, Judge Kim suspects Judge Kan started the fire in the church that killed his brother. In flashbacks we learn that Yo Han didn’t start the fire, rather he was outside when the church went up in flames. Yo Han rushed into the church only to find the rich and powerful fleeing without regard for others in their path. Specifically Chief Cha actions crush Yo Han’s nieces’ legs while she flees without a backward glance. Yo Han retrieves his niece and is horrified when a burning rafter falls on his older brother. His brother urges Yo Han to get to safety as he can’t be saved. Yo Han is caught under burning rubble. He watches a firefighter steals his older brother’s watch and flee. After extracting himself, a dazed Yo Han holds his niece and exits the burning church and watches the rich and powerful complain about their ordeal, none of them injured, or lives destroyed. Now we understand Yo Han’s long game includes revenge against these select rich and powerful. Now we understand why Judge Kan killed the former firefighter in the previous episode. Judge Kan shows Judge Kim his burn scars from that horrible evening. 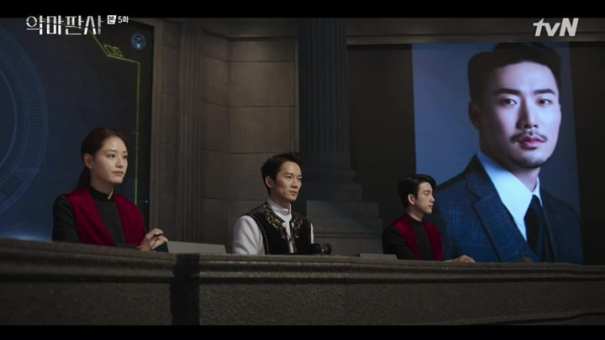 Third Court Case. A popular actor is brought before the court for habitual sexual assault. The prosecutor demands the actor not only be sentenced to jail, but he also be castrated. Judge Kan is shocked by the request. The public loves it and their bloodlust demands the punishment be assigned. Judge Kan realizes he’s been manipulated into the situation by executive director Jung Sun A, who we know is the real power behind the Social Responsibility Foundation using Chairman Seo as a figurehead.

Judge Kim struggles with deciding if Judge Kan is a monster or flawed person that deserves a chance not accusations. Supreme Court Justice Min urges Judge Kim to continue to investigate Judge Kan and provide evidence against Judge Kan.

Cornered by his promise to listen to the public when making his judgements, Judge Kan sentences the popular actor to 20 years in jail but NOT castration. The actor is thrilled. The public is not. Then Judge Kan reveals that the popular actor will serve his sentence in an American jail that houses hard core sex offenders. The actor is horrified. The public is thrilled. Executive director Jung Sun A admits Judge Kan bested her this time.

She summons Yo Han and takes him hostage. She holds him captive an a warehouse decorated just like his house. When she arrives, Yo Han realizes Sun A was once a maid in his home, when he lived in the basement where his father banished him often beating his illegitimate son. Sun A straddles Yo Han and kisses him passionately. It is a one-sided exchange.

Yo Han is playing a long game of revenge. Writer Moon Yoo Seok’s vision of a dystopian South Korea with huge gaps between the haves and have nots is a driver for the public’s demands for harsh judgements against the wealthy and powerful defendants in the live court. Director Choi Jung Kyu continues the moody despair in the night scenes and muted colors in poor rundown neighborhoods. Judge Kan wasn’t the only one welding power. The prosecution and Sun A flexed their muscles by backing Judge Kan into a corner. His creative sentencing avoided the castration though the popular actor might have deserved it. The quality of the third court case wasn’t has high as the first two.

Judge Kang Yo Han (Ji Sung) wants revenge. His rich frenemies are really his targets for revenge. I was relieved to learn that Yo Han didn’t set the fire in the church and didn’t kill his brother.

Judge Kim Ga On (Jin Young) is the mole in Yo Han’s household. His investigation of Yo Han isn’t straightforward. Ga On’s own backstory is still a mystery so we don’t know how to connect the dots to the series characters.

Detective Yoon Soo Hyun (Park Gyu Young) decided Yo Han is not to be trusted. Her investigation of Yo Han is biased not impartial.

Executive Director Jung Sun A (Kim Min Jung) took Yo Han hostage. She decided to stop watching and struck out. I like the reveal that she knew Yo Han as the hidden illegitimated son that lived in the basement.

The second song of the OST is the slick “Nightmare” by Sondia.

The lyrics speak to Yo Han:
What face am I making in the past memories?
I try to remember but I can’t

Have I gotten lost inside the thick fog?
I try to escape but I can’t see 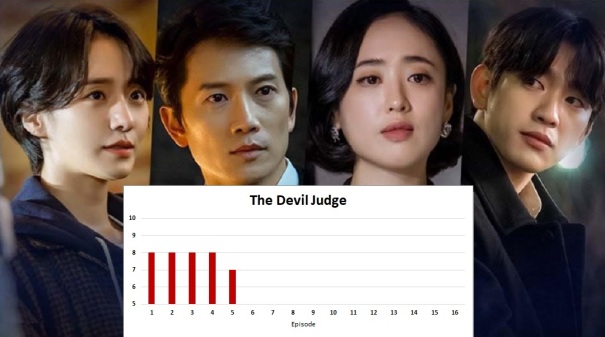