Court Lady Jo finds Soo Kyung and says there is trouble. The woman enters the room and asks where her son is. She asks who Soo Kyung is.  Court Lady Jo snaps she is the lady of the household. Cha Dol’s Mom laughs. Ba Woo’s mother and sister hear the laughter. 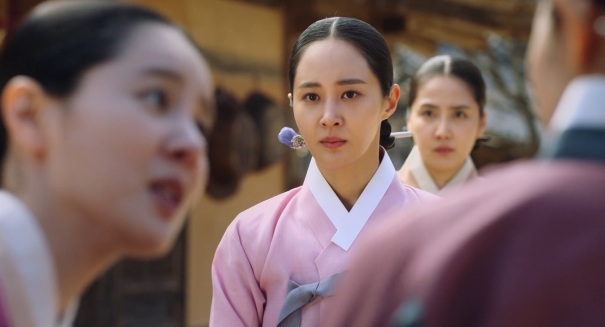 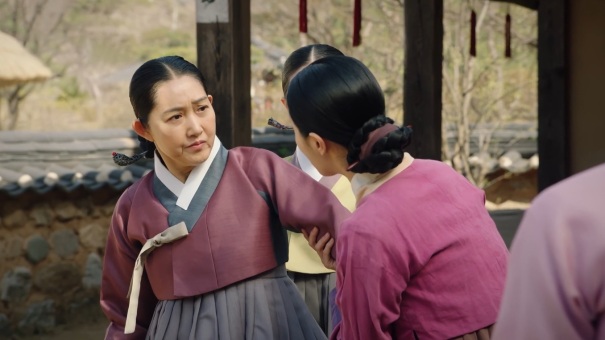 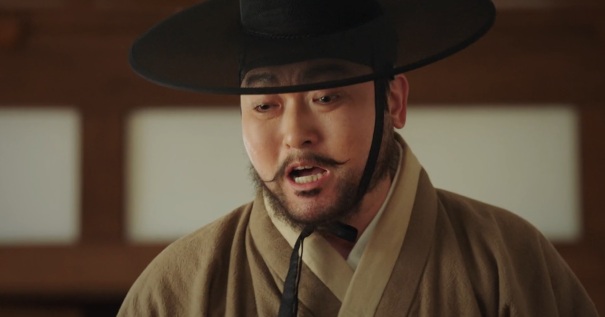 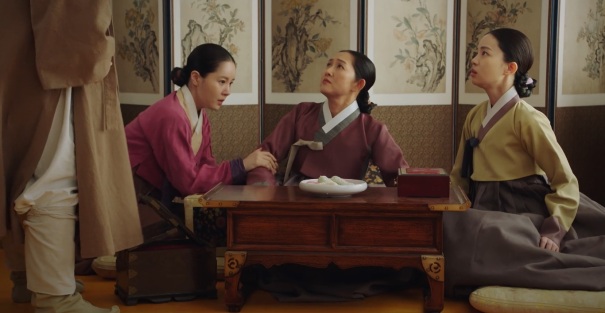 Chun Bae bursts into the room and declares Cha Dol’s Mom abandoned her son to run away in the middle of the night. Cha Dol’s Mom declares he’s lying. Chun Bae counter he witnessed the effects of the cruel abandonment. Ba Woo’s mother orders Chun Bae to remove her. Then she spots the identification badge. Cha Dol’s Mom explains this is her late father’s badge. Ba Woo’s mother is impressed that she’s of noble birth. They wonder why she got involved with Ba Woo. Cha Dol’s Mom’s claims there was something special about Ba Woo. She isn’t surprised to have learned Ba Woo was from a noble family.

Soo Kyung reminds Chun Bae the first wife isn’t the issue. The trouble Ba Woo may be in is the issue. Chun Bae points out Ba Woo won’t be happy when he returns to find that women in his room. Soo Kyung declares that doesn’t matter today. Ba Woo’s safe return is what matters.

Soo Kyung writes a letter and asks Chun Bae to deliver it straight away as Ba Woo’s life might depend on it.

At the jail, Kim Ja Jaeom asks Cha Dol if he has a letter from Vice Premiere Lee. He informs him if there is no letter he’ll be released if he agrees to persuade his father to send rations and money to the Ming. Ba Woo learns there is no update in the king. 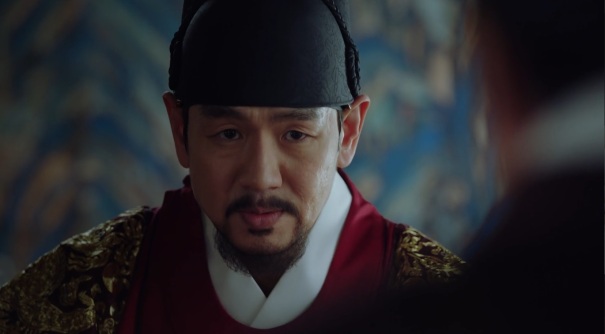 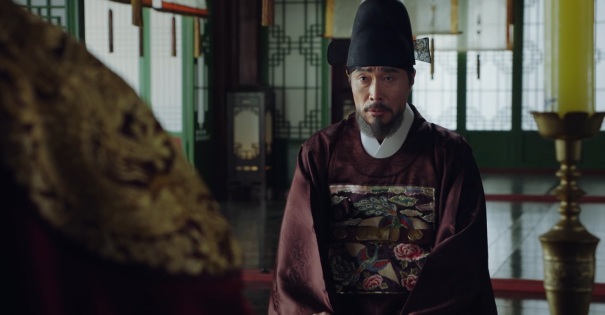 The king ponders. Court Lady Kim arrives. He asks why she sent Kim Ja Jaeom to the north. Court Lady Kim claims it was a loyalty test. She asks what the king will do about Ba Woo. The king says the Ming need a scapegoat. He doesn’t want to give food the kingdom can’t afford to give.

In the jail cell Lee Dae Yeob (Shin Hyun Soo) remembers his conversation with his father.

Flashback…Vice Premiere Lee tells Dae Yeob the letter to the Ming confirms rations and money will be provided per request IF Ba Woo is killed and it is made to look like he is missing in action. 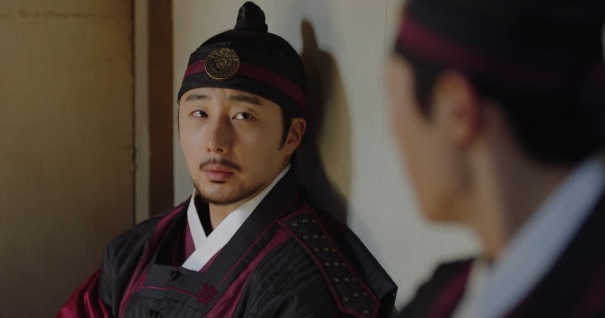 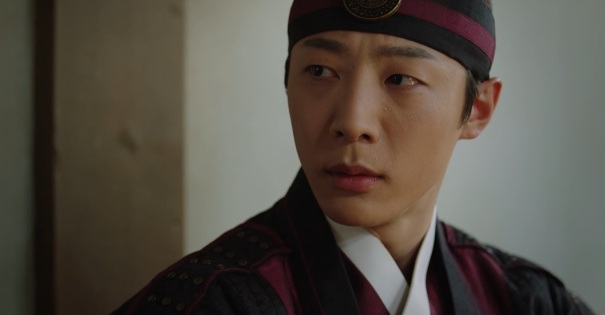 Kim Dae Seok / Ba Woo (Jung Il Woo) asks Dae Yeob to confirm he has the letter in question. Ba Woo tells him to use it and save himself. Ba Woo knows he’s going to be killed regardless. Even though he wants to live, he won’t beg for his life or be indebted to Dae Yeob.

Soo Kyung looks at the embroidery where she stitched Ba Woo’s name. Court Lady Jo can’t believe they are being tossed out. How much more should a princess endure. Cha Dol’s Mom enters and orders them to finish packing and get out. Court Lady Jo can barely hold her fury.

Chun Bae returns after delivering the letter. He tells Soo Kyung he was assured Ba Woo will be okay.

Changed into Soo Kyung’s clothes, Cha Dol’s Mom makes the room hers with a smug smile. 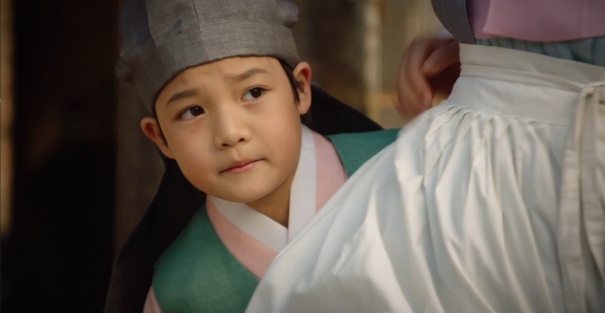 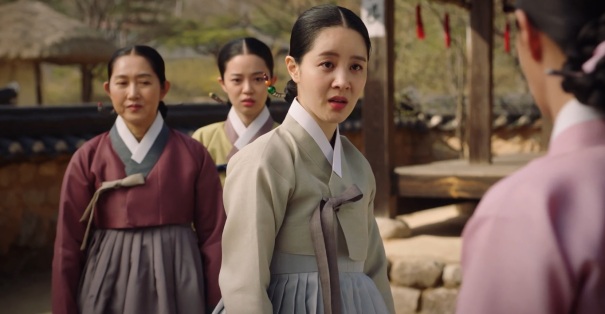 Cha Dol (Ba Woo’s son) returns from school and asks where Soo Kyung is. Ba Woo’s mother and sister greet him. Soo Kyung greets him. Cha Dol’s Mom rushes to him, hugs him, weeps that she’s back and sorry. Cha Dol doesn’t know who she is. Ba Woo’s mother informs him this is his birth mother. Cha Dol hides behind Soo Kyung. He refuses to greet his mother and runs. Soo Kyung starts to go after him. Cha Dol’s Mom barks she’s the mother. She orders Soo Kyung to back off. She goes after Cha Dol.

Cha Dol dutifully sits with his mother until she presses him to declare he’s happy she’s returned. Cha Dol stands and states he’s going to study with his mother (Soo Kyung). Cha Dol’s Mom snaps she’s the birth mother. Cha Dol counters she cheated on his father with his friend and ran away in the middle of the night. She doesn’t like that.

Cha Dol’s Mom stops him from looking for Soo Kyung.

Cha Dol struggles to sleep. His mother tries to soothe him and quickly falls asleep. She snores.

Chun Bae declares Cha Dol’s Mom is a liar and terrible mother. He provides examples. She trapped Ba Woo by getting him drunk, sleeping with him, then the result linked them forever. Chun Bae worries Ba Woo may not be able to get rid of her.

One of the women that Ba Woo saved from the Ming offers him rice. Ba Woo sees the Buddhist symbol on the rice. A Ming soldier order him to hand over the rice. Ba Woo eats the symbol then returns the rice. The soldier stomps on the rice and takes the woman away. Ba Woo spits out the rice. There is a piece of metal. Dae Yeob watches.

The woman leaves the jail. She tells the monk she gave the rice to Ba Woo.

That night, Ba Woo uses the metal to unlock his shackles. Kim Ja Jaeom arrives with the new the king has agreed to give Ba Woo to the Ming. Kim Ja Jaeom warns the Ming will try and kill him. Kim Ja Jaeom promises to try to help. He leaves. 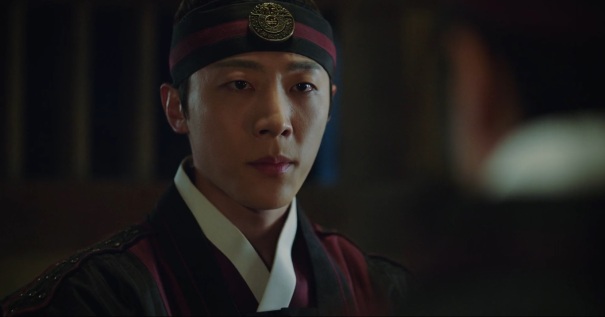 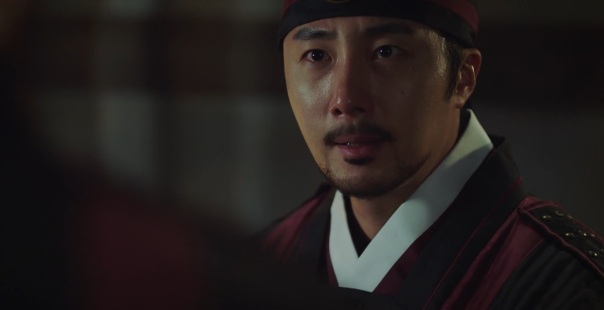 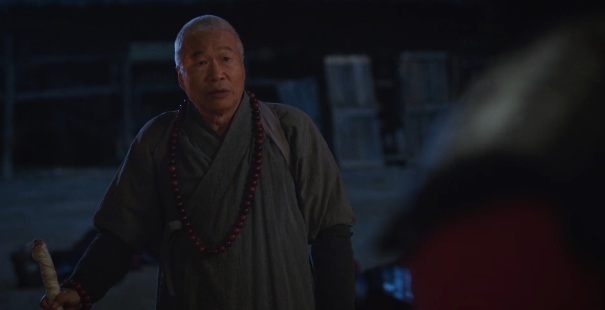 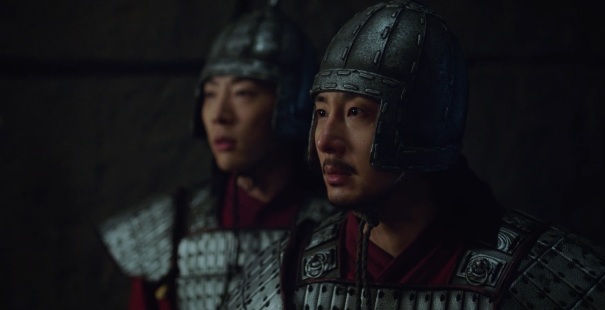 Dress as Ming guards, Ba Woo and Dae Yeob make their way out of the jail by joining a procession of Ming guards. They peel off and into the village. They approach the gate. They can’t answer the guard’s questions, so they fight. The monk takes out the last guard. He tells the surprised men, that Soo Kyung asked for his help. He tells them to hide for the time being in Uiju. They flee. The monk prays for their safety.

The Min search for the pair. Ba Woo and Dae Yeob make their way through the woods and manage to avoid detection. At nightfall they rest. Ba Woo asks why Dae Yeob is defying his father. Dae Yeob replies he’s following his heart. They need only concentrate on staying alive.  Dae Yeob asks Ba Woo why he is risking his life as a noble when he could have lived quietly as a commoner. Ba Woo replies he won’t die because he has someone waiting for him at home that means more to him than his own life.

The next day the pair continues making their way. The candidate Won Yeob hired to shoot Ba Woo aims at Ba Woo. Dae Yeob sees the man and puts himself between Ba Woo and the bullet. Dae Yeob is shot in the back and falls to the ground. The candidate takes aim again. Ba Woo sees him and rolls away. He charges the candidate and they fight. He puts his knife at the candidate’s throat and demands to know who sent him. The candidate admits Vice Premiere Lee sent him to kill him. He begs for his life. A Ming guard shoots the candidate in the back. Ba Woo turns and sees they are surrounded by Ming guards.

I do love it when the king bests Vice Premiere Lee. 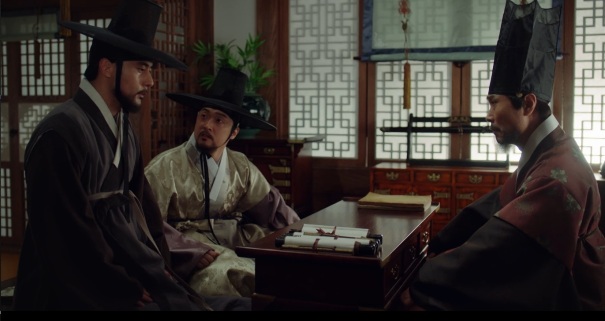 The woman peddler asks about the household members when she shows her wares to Ba Woo’s mother and sister.  Cha Dol’s Mom declares the only other people in the household are mere servants.

Tae Chul reports to Dae Yeob and Won Yeob that the woman is Ba Woo’s wife. Vice Premiere Lee doesn’t believe the wife is what the king is protecting. He orders the peddler to find out more about all the household members. 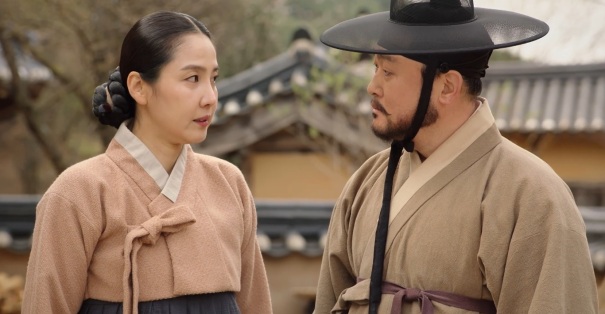 Soo Kyung cries while she eats. 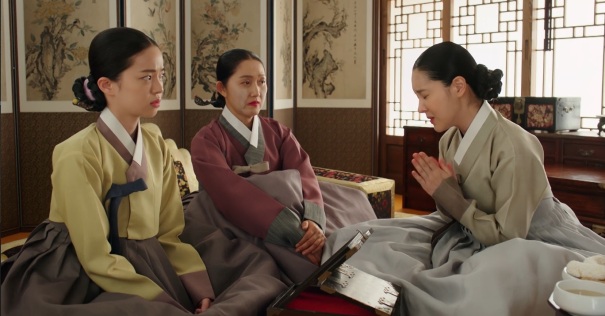 Cha Dol’s Mom ingratiates herself with Ba Woo’s sister by claiming she purchased a hairpin with her in mind. Ba Woo’s mother asks why Cha Dol’s Mom isn’t interested where Ba Woo is. Cha Dol’s Mom reveals she knows Ba Woo is on a mission in the North and prays for him every day. 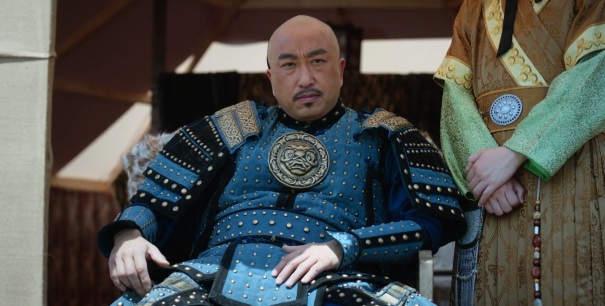 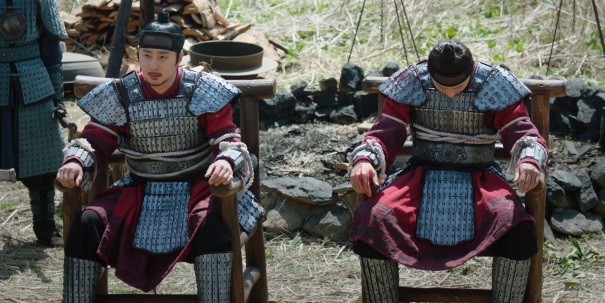 Meanwhile Ba Woo and Dae Yeob are tied to chairs at the Ming camp. The commander wants to know who they are. Ba Woo declares they are Joseon soldiers on a special mission. The commander barks that Dae Yeob had a letter for the Ming emissary. He demands the truth or they will die.

Caught eating not praying, Cha Dol’s Mom wants to get rid of her.

Cha Dol’s Mom is annoying, petty, vain, and a pathological liar. Writers Kim Ji Soo and Park Cheol injected Cha Dol’s Mom into the story to make things even more difficult for Soo Kyung. She can’t seem to catch a break for a sustained window of time. Ba Woo and Dae Yeob escaped and were recaptured. Both men acted with honor towards each other.

Ba Woo (Jung Il Woo) had a file hidden in the rice. I had to chuckle when the monk smuggled a file into Ba Woo then wacked the Ming guard ready to strike Ba Woo down. Ba Woo told Dae Yeob that he wouldn’t die because he had something more precious than himself waiting for him at home. Is he reference Soo Kyung or his son or his family?

Soo Kyung (Kwon Yuri) suffered the slights by Cha Dol’s Mom. At least Cha Dol’s Mom isn’t evil like Vice Premiere Lee. She’s self-absorbed and wants Soo Kyung out of the way, but she wouldn’t poison her to achieve it (like Vice Premiere Lee or Court Lady Kim). Soo Kyung kept calm and carried on. Her focus was Ba Woo’s safe return. She altered the monk to Ba Woo’s situation. He ended up saving Ba Woo who has more lives than a cat. Soo Kyung loves Ba Woo. Will she ever get the chance to tell him?

Lee Dae Yeob (Shin Hyun Soo) took a bullet for Ba Woo. Dae Yeob saw the candidate his father hired aim his gun at Ba Woo. Dae Yeob instinctively acted and stepped in front of Ba Woo and was shot. Does Ba Woo know Dae Yeob has a bullet in his back? I have to give Dae Yeob props for his code of honor. He hasn’t sold out to his powerful father.

The thirteenth song of the OST is “Tough Years” sung by Park Joo Han. Lyrics (link)

I rank this episode as almost terrific, 8.5 on a 10-point scale. 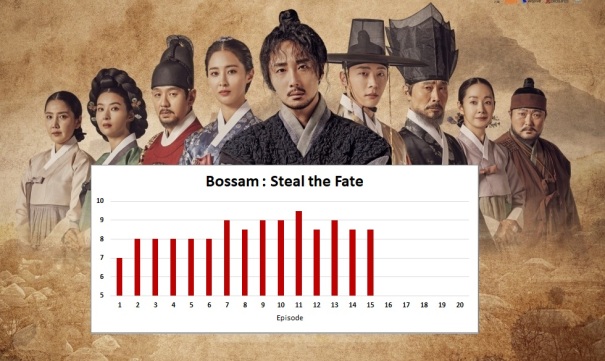