Doom at Your Service Episode 8

Tak Dong Kyung (Park Bo Young) says she’ll always find him. She knows he’s a good person. He won’t run away; he can’t run away until he grants her wish. Doom (Seo In Guk) reaches her and pulls her into a hug. He feels for her and he can’t deny it. Dong Kyung hugs Doom and smiles. They bicker about each other’s actions. Doom promises to tell her everything.

Sonyeoshin (non-human being/god) She looks at her pot. It has sprouted. She smiles.

Doom claims he’s the reason for all her misfortunes. She counters good things are the opposite is misfortune, so he’s responsible for them. Dong Kyung states he’s not responsible. Doom smiles. Dong Kyung smiles. Then she senses something. She puts her hand on Doom. Then she’s gone.

Doom goes to Dong Kyung’s apartment. Someone else is living there.

Dong Kyung is in a flower field. Sonyeoshin is there.

Tak Sun Kyung (Dong Kyung’s brother) is startled when Doom appears and asks about his sister. Sun Kyung says he’s an only child and walks away.

Doom goes to work. No one knows who Dong Kyung is. Someone else is working at her desk.

Doom realizes Dong Kyung has been deleted from the world.

Doom strides to Sonyeoshin’s room in the hospital. He sees her things. He sees a book open to Pinocchio wanting to become a real boy. The fairy tells him to earn it.

Doom explains Sonyeoshin is god and she was in Sonyeoshin’s garden. Dong Kyung admits she told Sonyeoshin that Doom wasn’t responsible for her misfortunes and Sonyeoshin laughed. Doom admits he was scared. Sun Kyung enters Dong Kyung’s apartment and sees the joined apartment with his sister and Doom in his apartment. Dong Kyung murmurs this isn’t good.

Sun Kyung tries to take in what Doom is. He’s startled when Doom can hear his thoughts. Sun Kyung wonders if he’s losing his mind. Dong Kyung enjoys messing with her brother. Doom says he’s come to save Dong Kyung. That gets Sun Kyung’s attention. Doom tells him to forget everything and fall asleep. Sun Kyung immediately falls asleep.

Ji Na is emotionally distraught while Doom drives them to Dong Kyung’s place.  Dong Kyung says she could die in surgery. Doom claims he can save Dong Kyung. Sun Kyung tells Ji Na this is Dong Kyung’s boyfriend. Ji Na can’t believe Dong Kyung didn’t tell her. Ji Na chides Sun Kyung for not sharing the news. Tired of the chatter Dong Kyung tells them to leave. She says she’s living and sleeping with Doom. Ji Na is shocked.

Sun Kyung tells Ji Na that Doom has been supportive of Dong Kyung. Ji Na is impressed at the increased maturity. She tells he’ll they get through this together. He agrees. She warns him not to keep secrets from him again. He agrees.

Dong Kyung tides her apartment while Doom watches. He holds out his hand. He puts the bracelet back on her wrist. Dong Kyung says they should continue to live and sleep together.

In their joined apartments. Doom watches Dong Kyung sleep on the couch. She wakes and looks at the world ball that Sonyeoshin gave her. 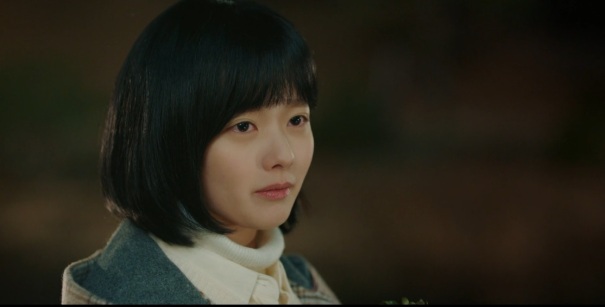 Doom finds Sonyeoshin. He warns her not to touch Dong Kyung again. Sonyeoshin says Dong Kyung loves him. She hopes things will work out. She offers him the refreshed tulips and tells him to keep hoping.

At work Dong Kyung’s coworkers worry about her.

The next morning Dong Kyung notices the tulips. The writer with the cancer calls Dong Kyung. She tells Dong Kyung she’s quit writing for the company. She shares her surgery is next month. She hopes to be able to write a story about a high school romance. Dong Kyung supports her dream. The writer urges her to love and hang onto life.

Dong Kyung goes over to Ji Na’s apartment. Dong Kyung asks Ji Na to treat her normally not like she’s a dying woman. They agree to order cook.

Joo Ik and Hyun Kyu grocery shop. Hyun Kyu asks who the girl was with him. Turns out Hyun Kyu didn’t recognize Ji Na from the back. He goes back in the shop without seeing Ji Na. Joo Ik says it was a writer. Hyun Kyu says he saw the look on Joo Ik’s face. Hyun Kyu gets a call from Sun Kyung and says he needs to go.

The next morning Ji Na sleeps and doesn’t answer her phone. Dong Kyung hears the doorbell and goes to answer. She’s surprised to see Joo Ik at the door. Ji Na and Joo Ik are forced to admit they have a contract. Dong Kyung wonders if it only business. Joo Ik says he’s put her down for leave at work. Dong Kyung smiles and leaves. Ji Na asks why he came. He says he’s worried about her writing due to her distress. Joo Ik starts to share but is interrupted when the door rings. Ji Na is surprised to find Hyun Kyu on the other side of the door.

Doom takes Dong Kyung’s hand as she waits at a crosswalk. When they step into the cross walk, Doom transports them to an amusement park on a lovely spring day. He says she loved this day in her memories. Dong Kyung is all smiles. Doom finds her charming. Dong Kyung loves the gesture. Dong Kyung hopes that no one remembers when she dies so they don’t feel sad. She hopes she’ll disappear like evaporated water. She asks if she could wish that. Doom kisses her. Dong Kyung kisses him back. 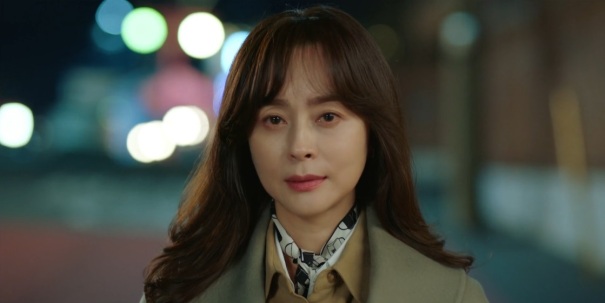 Everyone knows. Writer Im Meari ended the episode with Aunt Kang returning to Korea. Now everyone that’s important to Dong Kyung – her brother, her friend, and her aunt – knows she’s ill. The chemistry between Dong Kyung and Doom continues to strengthen. Sonyeoshin’s pot bloomed. Turns out Hyun Kyu did not recognize Ji Na when Joo Ik spun her around. Hyun Kyu took Sun Kyung’s words to heart and went to her apartment just as Joo Ik was getting ready to…confess his feelings? Is Joo Ik is the better choice for Ji Na? The reference to Pinocchio wanting to be a real boy was telling. Does Doom wish to become human?

Tak Dong Kyung (Park Bo Young) was deleted by Sonyeoshin.  Dong Kyung’s conversation with the secretive Sonyeoshin was interesting. She took the world ball from Dong Kyung’s pocket, gave it to her, and said the fate of the world depends on what Dong Kyung does. Nor should Dong Kyung miserable because of Doom. She said Dong Kyung and Doom must earn happiness. The heart of this series is this couple. They deserve the heavy screen time.

Myul Mang / Doom (Seo In Guk) told Dong Kyung she could like him. He is obviously under her spell. The feeling is mutual. When Doom is with her there is an appealing tenderness to him now. The sweet moments Doom grants her – the cherry blossoms, the amusement park, seeing her parents – are lovely to watch. The joy they bring Dong Kyung warms Doom’s heart. He’s falling for her.

The third song of the OST is the pretty ballad “U” sung by Baek Hyun. 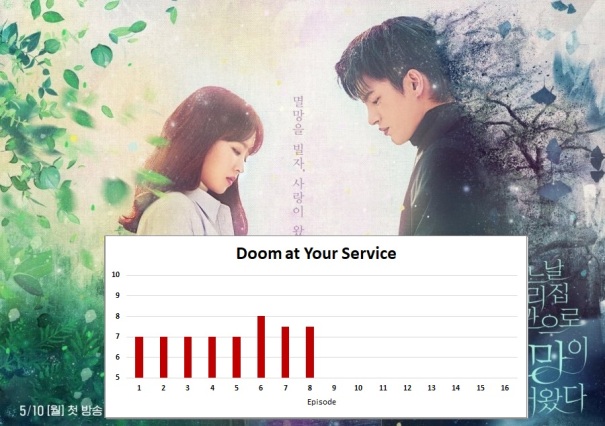 2 comments on “Doom at Your Service Episode 8”