Spies Who Loved Me Episode 8 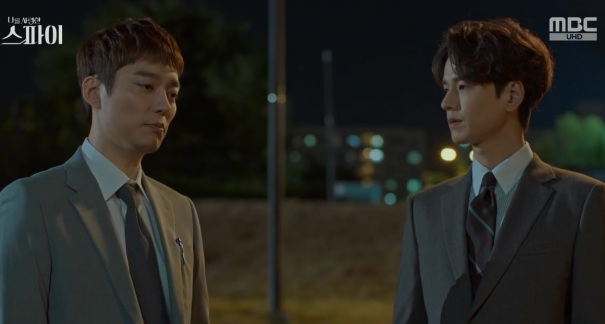 Derek Hyun (Lim Ju Hwan) and Peter meet. Peter asks if Derek Hyun will avenge Sophie’s murder. Peter admits he had feelings for Sophie but knew dating her would be a negative for her. If Derek Hyun can’t avenge Sophie, Peter will. They end the conversation. They don’t realize A Reum and Ji Hoon were watching from different vantage points.

Kang A Reum (Yoo In Na) downs soju back in her office. She wonders why Derek Hyun has a relationship with Sophie’s stalker.

Jeon Ji Hoon (Eric) down soju while considering the damming proof that A Reum’s husband is a spy. He feels bad for his ex-wife.

Ji Hoon texts A Reum. She doesn’t want to, but calls him. She suggests they meet.

Ji Hoon doesn’t like that A Reum is pretending all is well.

Ji Hoon and A Reum meet. She returns his items.

Flashback…A Reum gives Ji Hoon money from items she sold for him. They sit on the bench. Ji Hoon asks her to care for his personal possessions, noting she’s the closest person in his life. He returns the money as a storage fee.

Ji Hoon stares at the personal possessions from long ago. He thanks her for taking good care of them. A Reum stands and leaves.

The team gathers. The connection between Peter and Sophie is a foundation whose head is anonymous.  Director Ban Jin Min urges them to dig. Analyst Kim Young Gu shares his belief that the dashcam video was spliced. Recall Ji Hoon spliced the video to eliminate Derek Hyun. Ji Hoon offers to find an alternative view. Chief Kang Tae Ryong suggests he might take a break and visit his kids. Director Ban declares they are in the middle of a case. 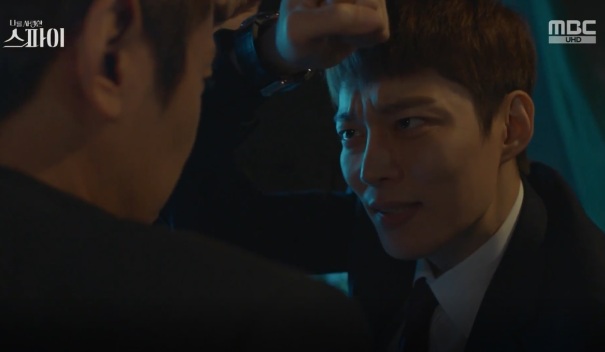 Anonymously Ji Hoon sends Peter a note stating he has information about Sophie’s killer. Peter spots and follows Ji Hoon. When Ji Hoon maneuvers Peter to the right location, he reveals himself. Ji Hoon states he was at the bachelorette party too. Ji Hoon reveals he’s the Interpol agent Sophie was working with to expose Helmes. Peter asks what Ji Hoon knows about Sophie’s desk. Ji Hoon shows the video of Sophie on the ride. Ji Hoon wasn’t able to protect her to give her the chance at the life without Helmes. Angry that Ji Hoon failed, Peter attacks. They fight. Ji Hoon asks for Peter’s help. He shows Peter the dashcam footage with Derek. Ji Hoon admits he doesn’t know if Derek Hyun killed Sophie, but he needs Peter help to bring whoever killed Sophie to justice. Peter asks why Ji Hoon is doing this. Ji Hoon admits he must protect someone else and won’t fail again. Ji Hoon says either Peter joins him or he’ll be forced to chose a path neither will like.

A Reum watches her husband tending her mother. She intends to bait the trap. She enters the room supposedly on the phone and learning that a memory card was found in Sophie’s compact. A Reum wants it left on her desk and ends the call. A Reum tells her husband she’ll take over caring for her mother and he can go. He leaves with a smile for his wife.

Sophie’s shop is sparsely populated when Derek Hyun slips into Sophie’s office. Bae Du Rae closes up and turns out the lights. Derek Hyun searches the desk. A Reum finds him. She asks what he’s looking for. She suggests that he’s involved in Sophie’s murder. Derek Hyun glances at the camera in the chandelier.

Ji Hoon’s surveillance device shows him A Reum and Derek Hyun in her office.

A Reum shares that Sophie warned her not to trust those close to her. A Reum admits she’s been searching for clues in Sophie’s murder. She lays out her evidence against Tinker, the listening device recording, and his meeting with Sophie’s stalker. She reveals Sophie was a spy and was killed for it. Derek Hyun chuckles that she watches too many movies.  A Reum counters that he’s perfect to be a spy. Everyone likes him except for Sophie. A Reum wonders if that dislike was because they were both spies.

Flashback…Derek Hyun trains for the day his cover is blown.

Derek Hyun asks if A Reum will believe what he shares. A Reum admits she doesn’t trust him. She warns him not to lie or their marriage is over. Derek Hyun realizes he’s going to regret his choice in this moment. Derek Hyun asks how A Reum knew Sophie was a spy. A Reum tells him the police told her. Derek Hyun confirms the suspicion. She asks who killed Sophie. Derek Hyun says he doesn’t know. He admits he recruited Sophie. A Reum demands to know why. Derek Hyun admits he’s stolen secrets and in too deep. A Reum asks what kind of man she married. She asks if he did this under duress. Derek Hyun says being a spy is part of his identity. He assumes a rival agency, Felix, killed Sophie as his agency had to cause to kill her. Derek Hyun admits he was afraid the truth would destroy their marriage. A Reum declares he’s disrespected their relationship and her. A Reum agrees and says she’s staying at her mother’s house for the time being. Derek Hyun says he’ll wait for her to return. He leaves. A Reum cries.

Ji Hoon tears up at the pain A Reum is feeling.

Derek Hyun exits the shop and get in his car. He cries.

A Reum sits alone in her office. She looks at photos of her wedding to Derek Hyun.

Derek Hyun touches the classic car he planned to give A Reum for their wedding anniversary. 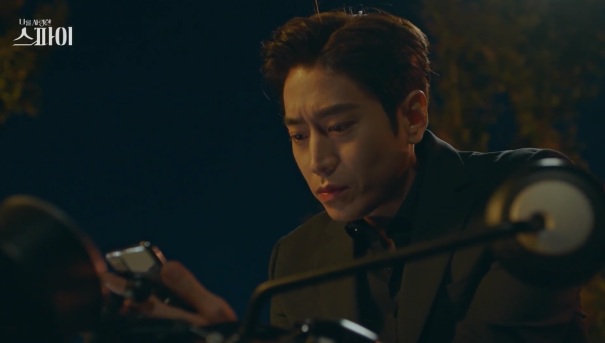 After picking up food, A Reum gets a call from Du Rae. She dodges what she’s doing.

Kim Dong Ran learns her half-brother Kim Dong Taek is painting the summer house. She asks if anything has been uncovered about the diplomat (Derek Hyun) that she saw her brother talking to at the gallery. She wants details. She slips into a hospital room.

At the hospital, A Reum gives her mother the food she picked up. Her mother eats with relish. Her mother shares the patient next door has rage issues. Her mother brags about having the best son in law. A Reum disagrees and step out into the hospital hallway.

Kim Dong Ran steps out into the hospital hallway and is startled to find A Reum standing there. Both women are surprised.

Derek Hyun arrives home. A Reum isn’t there. He misses her. He remembers sweet moments with her. Tinker calls. A Reum leaves.

Young Gu informs the team the Russian hacker the security team wanted is under Russian protection but the CIA paid to have him extradited. What they learned isn’t as shocking as expected.

Tinker disagrees with Derek Hyun’s choice to trust the CIA to find “her”. Tinker wants the boss’s approval. Derek Hyun is firm they will handle it themselves. 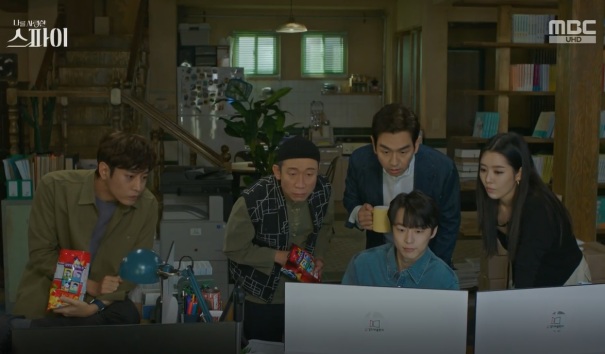 The team is shocked to learn the hacker has moved to Korea.

Ji Hoon tries to convince the hacker to work for them as the team watches behinds the mirror. The hacker wants the cash up front, not in installments that Ji Hoon offers.

The team looks to Seo Ra for cash. She exits in disgust.

Tinker brings the hacker to Derek Hyun. They negotiate 70% up front, 30% when the job is done. After she leaves, Tinker says Derek Hyun has been on edge. He asks if everything is okay in his marriage. That garners Derek Hyun’s displeasure.

Seo Ra brings the cash to Director Ban. She warns him to pay her back. Director Ban thanks her. 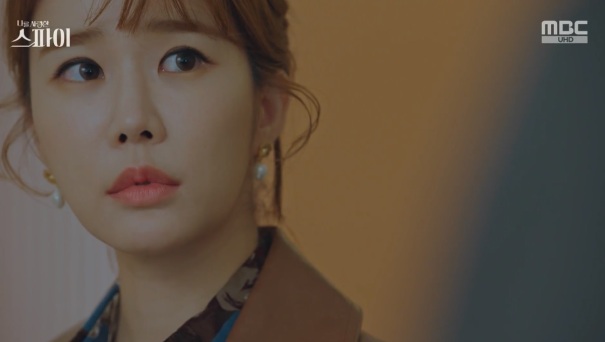 A Reum is surprised to find her husband in her office when she arrives. She ignores his offer of apples. Derek Hyun swears he’ll quit his job and devote himself to their marriage. He just needs a couple of days to sort out the details. He leaves the apples. 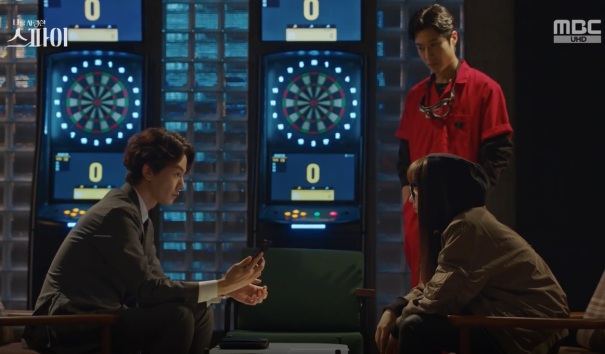 Derek Hyun pays the hacker. He gives her camera glasses to wear while she works. He hopes A Reum will wait for him.

Ji Hoon arrives at the shop with concern and ramen for A Reum. He has kind concern for her mother. Ji Hoon admits that A Reum doesn’t have to tell him everything. She must protect herself.  He shares after Sophie was killed, he realized he doesn’t do a good job protecting people. He wants her to know he’ll wait for her and he trusts her. Ji Hoon leaves A Reum to finish her meal. She sighs at his kindness.

A Reum declares she won’t allow the dress to be worn. She’s willing to shred it with her own hands.

A Reum rips the dress.

Derek Hyun promises they’ll get what they need.

The hacker starts to hack.

A Reum finds the memory card in Sophie’s dress.

Ji Hoon believes the person that has the memory card is in great danger.

Derek Hyun promised to quit to keep his marriage intact. Writer Lee Ji Min focused on Derek Hyun’s willingness to admit his profession, and promise to give it up for A Reum. Color me surprised that Derek Hyun caved and revealed the truth. He loves his wife. He believed continuing the lie was the path to losing his wife. Will admitting the truth save his marriage?

Kang A Reum (Yoo In Na) learned her husband was a spy. He confirmed her suspicions. He promised to give up being a spy. Can A Reum forgive him? Can A Reum believe him?

Jeon Ji Hoon (Eric) figured out Derek Hyun is a spy. Ji Hoon wisely gave A Reum space and didn’t force her to reveal what she knew about her husband. I enjoyed the light moments between the team. The hacker double dipped Ji Hoon and Derek Hyun for cash. Can she be trusted?

Derek Hyun (Lim Ju Hwan) told his wife the truth. The question – who does Derek Hyun value more…his job or his wife – was answered by Derek Hyun this episode. Derek Hyun’s struggle to reveal the truth with the single goal to keep his marriage felt authentic. Its obvious he loves A Reum and believes he can walk away from his profession. Will leaving the profession be harder than he imagines?

The fifth song of the OST is titled “”The Trace You Left” and is sung by Solji: