Spies Who Loved Me Episode 7

Derek Hyun (Lim Ju Hwan) lies to his wife that her soup is delicious. He recalls that lying came easy and early in his life. Now he can lie and make his wife happy. He wonders if he can tell the truth, that he’s a spy. He knows she’ll find out one day, but he believes their marriage will withstand the blow because they love each other…at least that’s what he tells himself. As Derek Hyun watches his cohort Tinker subtly threaten his wife, Kang A Reum (Yoo In Na), he realizes his profession puts her danger. He steps forward to interrupt. He dissuades her from a full perusal of his restoration area. A Reum realizes she can’t get around him and steps away as Tinker watches with a touch a malice. Outside, A Reum wonders if she should let Ji Hoon know.

Director Ban Jin Min interrupts Jeon Ji Hoon (Eric) perusal of the dashcam video from Sophie’s murder location. The video with Derek Hyun in it. Ji Hoon lies he found nothing as Director Ban sends him to support Seo Ra. 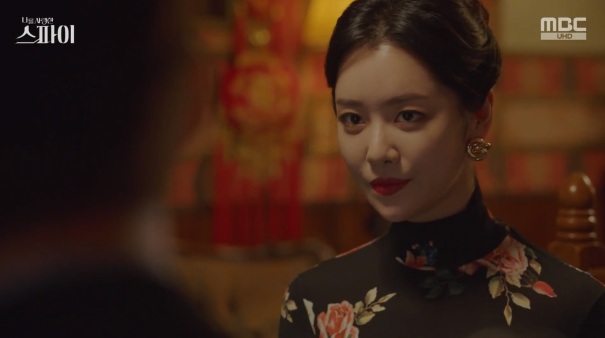 Inside the eatery, Agent Hwang Seo Ra games with Peter and Jang Doo Bong. With verbal and nonverbal communication, she gets Peter to help her win.

Young Gu texts Seo Ra to call him. She steps out to do so. Peter warns Jang Doo Bong not to date her.

Jang Doo Bong tells Peter he doesn’t like Peter’s boss with the English name. Rumors say he hurt someone on Jeju. That gets Peter’s attention. Jang Doo Bong says he didn’t want to upset Peter because of his feelings for Sophie. Peter is not happy with the idea that Derek Hyun hurt Sophie.

Young Gu and Seo Ra avoid detection by hiding under a table.

Seo Ra sees Peter leave upset. She tries to follow but Jang Doo Bong stops her. Ji Hoon sees Peter leave the eatery as he arrives via motorcycle. He follows Peter’s car. Peter realizes the motorcycle is following him. As he parks, Ji Hoon parks too pretending to be a food delivery guy. Peter heads into his building.

Unable to sleep, A Reum opens her husband’s computer. She doesn’t know the password. She wonders if her suspicions have merit.

Flashback…A Reum remembers the first time Derek Hyun introduced her to Tinker, the owner of the car restoration garage, who he claims to have met in America.  As her husband shows her around, A Reum notices the touch of malice on Tinker’s face via a reflection. He wipes it away when she looks at him directly.

A Reum sees a picture of Tinker in profile and flashes back to the man that broke into Sophie’s apartment that she chased.

Tinker logs into the Helmes computer and makes a call. He reports to unknown man that he’s concerned about Derek Hyun’s wife’s suspicious activities. 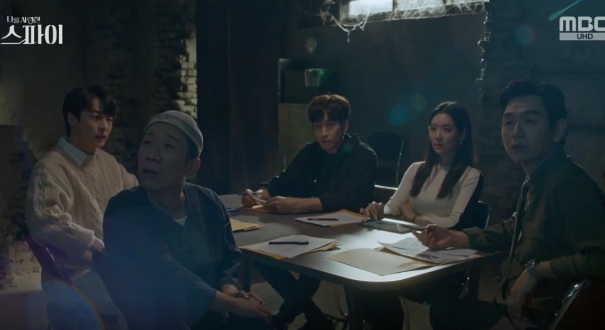 A Reum ignores Ji Hoon’s call when he arrives at the wedding shop. Instead she borrows a car from a coworker.

A Reum reads about her husband’s classic car club when watching the shop. She watches Tinker exit to take a delivery. Ji Hoon watches Tinker and A Reum from his motorcycle.

Two men admit they can’t crack Sophie’s password. The security officer declares if they don’t figure it out, there will be an international incident. One man says he’s contacted a N. Korean hacker.

Tinker leaves the shop. A Reum follows him. Ji Hoon follows her.  When Tinker pulls into a junkyard, A Reum exits her car to follow. Ji Hoon does the same. A Reum realizes the car that Tinker is driving is the car that almost ran into her when she decked the man who rifled Sophie’s apartment. She gets into Tinker’s car. Ji Hoon can’t believe it. When Tinker realizes he needs something from his car, he approaches. A Reum and Ji Hoon breathe easy when the junkyard owner distracts him.

Derek Hyun enters the conference room after the security team completes their meeting. He swaps the stuffed polar bear with another and leaves.

A Reum remembers her interactions with Tinker. Ji Hoon arrives. She lies that she’s been in the shop all day. Ji Hoon says he’s got dashcam video from a car near the murder scene. Ji Hoon suggests she look at it in case she can identify someone. Both of them wonder what the other isn’t saying. She and Ji Hoon duck into a room to avoid Bae Du Rae finding them. Ji Hoon wishes A Reum would tell him what she’s hiding. A Reum wishes she could tell Ji Hoon what she’s hiding. She leaves. 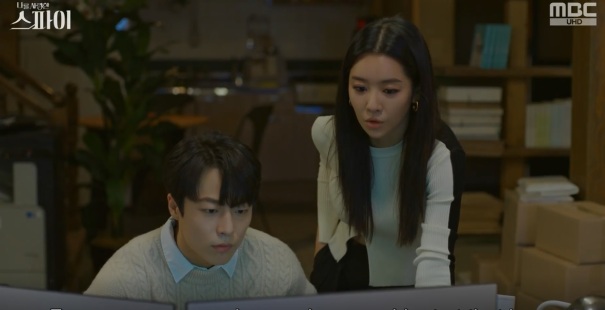 Derek Hyun arrives home with the stuffed polar bear in hand. He calls for A Reum but she doesn’t answer. Derek Hyun goes to his office and removes the listening device from the polar bear and listens to the security guys conversation.

As Ji Hoon exits the classic car shop, he promises to find out why Derek Hyun is friends with Kim Dong Taek.

In Derek Hyun’s office, Kim Dong Taek complains about not having the technology he needs to gain an advantage of his sister. Derek Hyun leaves when Kim Dong Taek takes a call about a painting that has arrived, displeasing his client. 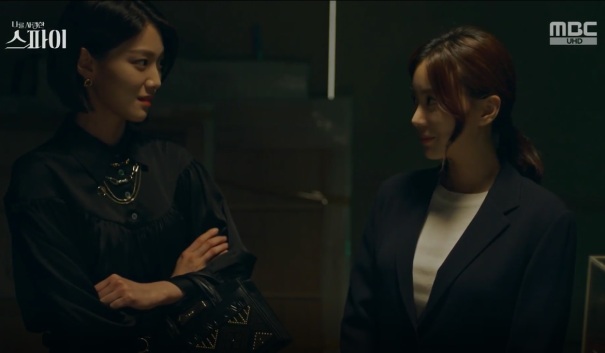 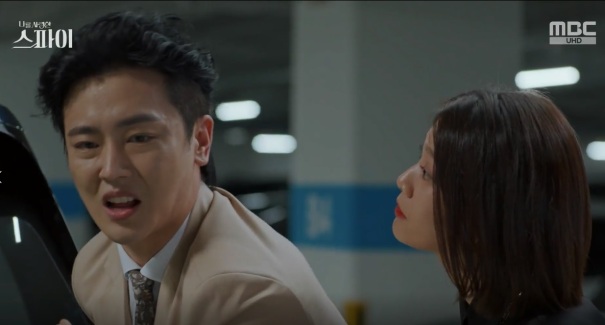 A Reum arrives home and calls for Derek Hyun, but he doesn’t answer. She finds the stuffed polar bear on his desk. She sees the rips belly and the recording on Derek Hyun’s laptop. She picks up the earbud and listens.

Derek Hyun arrives home. He finds A Reum in his office. He says he had to meet someone. A Reum asks who. Derek Hyun asks her to leave his office. Surprised, A Reum complies.

She reels at his coldness. She knows they have a wall between them.

Derek Hyun sits in his office and tosses the stuffed polar bear in frustration.

At their anniversary photo shoot, clad in bridal wear, Derek Hyun and A Reum are a bit stiff. On a break she urges him to share what happened yesterday. Derek Hyun claims not to understand what she’s talking about. When Derek Hyun is asked what he’d write on the anniversary cake, he suggests “I will always love you”. When A Reum is asked, she suggests “Let’s be a truthful couple”.

Ji Hoon researches Kim Dong Taek and concludes that Derek Hyun must be working for him. He wonders who A Reum has married.

When Derek Hyun ices the anniversary cake with a smile, A Reum wonders if all of Derek Hyun’s smiles are faked. She wonders who she has married. 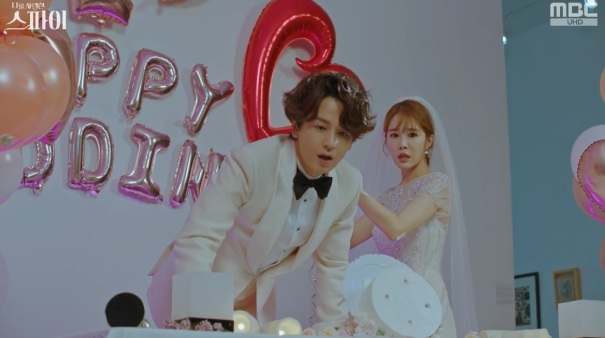 Trying to evoke an honest reaction out of her husband, A Reum pipes icing on his face and hair. He smiles and asks what she’s doing. A Reum suggests he react with honesty. Derek Hyun slips and knocks the anniversary cake onto the floor. Everyone is shocked. Derek Hyun glares at his wife. The tension is broken when a family alert arrives for A Reum.

At the hospital, A Reum’s mother frets that she’s only sick and a fuse isn’t necessary. Derek Hyun enters and acts concerned for his mother in law. A Reum’s mother is grateful for the private room and that her daughter isn’t alone. Derek Hyun declares he’ll always take care of A Reum. Derek Hyun leaves for a work appointment. A Reum tells her mother and Bae Du Rae she’ll get a humidifier from home and bring it to the hospital.

Young Gu wakes when Ji Hoon gets in his car. Ji Hoon sends him to get food. Ji Hoon slides into the driver’s seat.

A Reum sees her husband exiting the parking garage. She follows him.

A fissure is formed between A Reum and Derek Hyun. Writer Lee Ji Min focused on A Reum and Ji Hoon’s independently being suspicious about Derek Hyun. A Reum didn’t tell Ji Hoon what she knew and Ji Hoon didn’t tell A Reum that the dashcam footage showed her husband at the scene of the murder. Meanwhile Derek Hyun feels the heat from Kim Dong Taek to get the technical information he needs or else. I appreciate Writer Lee’s ability to inject humor and lightness in this series. Kim Dong Taek and Kim Dong Ran’s “fight” was amusing not scary. This series doesn’t take itself too seriously. Instead it delivers a decent story and a triangle where both men care for A Reum. She values the truth. Derek Hyun can’t give her that. This is problem for our married couple.

Kang A Reum (Yoo In Na) suspects her husband more and more. A Reum felt the tension when she went to the classic car shop. A Reum felt the tension when Derek Hyun found her in his home office and told her to leave. She knew at that point; they were literally on opposite sides. A Reum wondered if Derek Hyun’s benign smiles hide his true feelings. She goaded him to get an honest reaction, but the news that her mother was ill, interrupted the potential confrontation between them. Even so, A Reum can’t raise her suspicions to Ji Hoon…yet

Jeon Ji Hoon (Eric) wondered just who Derek Hyun is. Ji Hoon continued to suspect Derek Hyun is more than he seems, but hasn’t found the truth yet. He wondered about the relationship between Kim Dong Taek and Derek Hyun. He watched A Reum follow her husband secretly. Ji Hoon continues to keep his distance with A Reum and respects her marriage boundary. But A Reum’s safety is more important. There was no further movement from Chief Kang and his traitorous ways. Ji Hoon focused on Derek Hyun and his suspicions and concerns for A Reum grew.

Derek Hyun (Lim Ju Hwan) could not tell his wife the truth. Derek Hyun wanted to tell A Reum the truth per flashbacks, but couldn’t. He is under pressure from Kim Dong Taek to get the science behind Sophie’s work and hand it over. That’s easier said than done. Derek Hyun was taken aback when Ji Hoon arrived at his classic car shop. While they glared at each other, neither could admit the truth. Who does Derek Hyun value more…his job or his wife?

The fourth song of the OST is titled “Wherever” and is sung by Baek Ah Yun:

2 comments on “Spies Who Loved Me Episode 7”