Tell Me What You Saw Episode 15 Recap

Tell Me What You Saw Episode 15 “Trinity”

Both scenes were worth repeating to ground this episode.

Detective Cha returns to her room and remembers warm moments with Dong Sik. Now she knows he’s the peppermint candy killer. She cries.

Love that Dong Sik was in Hyun Jae’s lair and Hyun Jae was in Dong Sik’s former lair. This has always been about their relationship. Everyone one else was a pawn. Dong Sik’s direct look into the camera…did Producer Director Kim want to break the 4th wall?

Listening to the press conference Hyun Jae murmurs that was a checkmate move. He knows that Team Lead Hwang just kept RIU Team #1 out of the clutches of disbandment by higher ups in the police force. He says that was a decent move. Dong Sik has only one choice. Hyun Jae murmurs that what Dong Sik gets by making this game so big. He looks directly into the camera and says “what are you going to do?”

Dong Sik assumes the identify of Lawyer Jung. He creates a fake ID. He walks away from Lawyer Jung and two office workers bloody and dead on the floor.

The team discusses if Hyun Jae is the lynchpin to Dong Sik’s killing circle. They believe something ties Dong Sik and Hyun Jae that perhaps Hyun Jae doesn’t even know about. She notices Detective Lee’s chair is at a different angle.  She wonders if Hyun Jae was there.

Hyun Jae declares Dong Sik came because Hyun Jae was there and exposed. He urges Detective Cha to recall what Dong Sik told her.

Flashback…Dong Sik tells Detective Cha not to get upset and look up. Detective Yang’s body falls to the floor. Dong Sik says this is the invitation.

Detective Lee asks Team Lead Hwang if Dong Sik said anything that struck her as weird.

Team Lead Hwang says it was an invitation.

Detective Cha tells Hyun Jae it was Joo Sa Gang. Hyun Jae disconnects the earbuds. Detective Cha calls to him, but he’s gone. RUI Team Lead #2 is in the stairwell above her and has overheard.

She was used to find the answer Hyun Jae needed. Love the cuts between both parties realizing the answer at the same time. Bravo Producer Director Kim!

Joo Sa Gang is agitated as he’s driven to the courthouse.

Flashback…Joo Sa Gang expects to meets with his lawyer, but it’s Dong Sik. Dong Sik claims he is Lawyer Jung, his lawyer’s replacement for the day. Joo Sa Gang says he’s told his lawyer everything that needs to be said. Dong Sik agrees. But he stops Joo Sa Gang and says he wants to talk to his other personality. Joo Sa Gang stops dead in his tracks. Dong Sik calls him the left-handed killer. Joo Sa Gang’s left-hand twitches and he grabs it. Dong Sik says they need to talk.

Joo Sa Gang grabs his hand and tells himself not to do anything.

The tension is building!

Dong Sik sits in a white truck and sings to himself.

Hyun Jae drives away from a writhing and disabled RIU Team #2.

Flashback…Team Lead Hwang tells Hyun Jae she’ll have Dong Sik waiting for him if she gets there first.

Detective Cha explains that Hyun Jae used Bok Man to divide them so that Team Lead Hwang was alone. She thinks Hyun Jae wants to sort something between Dong Sik, Team Lead Hwang and himself. She believes there’s a reason.

Believing Team Lead Hwang would drive alone was a big assumption…but I quibble.

Dong Sik holds up a detonator. He’s disappointed the Team Lead Hwang is alone and says arresting by herself won’t be easy. He’s pleased when Hyun Jae arrives. He calls Hyun Jae. He chides Hyun Jae for being late. He holds the detonator in the air. He says it is part of a gift. He says the police van has a gift in it.

Flashback…Dong Sik plants a bomb on the police van when he arrives.

He mocks Hyun Jae that he can either stay next to the police van and face injury or step away. He says this isn’t the day for his last act. He gets in the truck. He drives away holding the detonator aloft. He presses the detonator. Hyun Jae realizes Dong Sik detonated Yi Soo’s car 5 years ago. Hyun Jae yells at Team Lead Hwang to go after Dong Sik.

Hyun Jae rushes to the police van and tries to break the glass to extract the trapped officers. He manages to get one out. Then he returns to extract another. But she’s trapped. She makes the same sounds Yi Soo did when she was trapped. Hyun Jae recoils. He says Yi Soo’s name.

Flashback…Hyun Jae tries to extract Yi Soo but the car blows up.

Hyun Jae pulls and pulls to extract the officer. He lifts her out of the van. The bomb explodes as he’s clear of it. The officer thanks him. Hyun Jae rushes to his car and takes off in the direction Team Lead Hwang went.

Dong Sik exits the truck and open the back where Joo Sa Gang is.

Team Lead Hwang pulls up next to the truck. Hyun Jae calls her.

Detective Cha learns Dong Sik is at the elementary school he went to as a child. Detective Lee says they aren’t far away. Detective Cha says this could be a trap.  Detective Jang calls for backup.

Chief Park learns RIU Team #1 is intersecting Dong Sik at the elementary school. Chief Park tells the officer to dispatch RIU Team #2 and no one else.

Enroute to the elementary school, Chief Park calls and yells at RIU Team #2’s Team Lead for letting Hyun Jae get away. He yells they must do what it takes to silence Hyun Jae and Dong Sik.

Joo Sa Gang wakes in the truck that Dong Sik has unlatched. He looks at his left hand.

As Hyun Jae fights, Dong Sik tells Team Lead Hwang that 5 years ago the first name she gave was the wrong name, but it is the right name tonight. He tells her to name the person to kill. He demands she say the name. Team Lead Hwang frees herself and declares there’s no one. Team Lead Hwang declares she doesn’t want anyone to die and he won’t kill anyone against. She declares he’ll face the law. She tackles him. He pushes her back to the ground. Team Lead Hwang stands and shows him her handcuffs.

The stage is set…we have two serial killers in play. Writers Ko Young Jae and Han Ki Hyun had Dong Sik kidnap and unleash Joo Sa Gang’s serial killer personality (aka the man in the helmet from episode 9). I don’t fully understand the connection between Hyun Jae and Dong Sik and if Joo Sa Gang is more than an additional killer to the party. We’ll find out in the final episode. This was another stellar episode from Producer Director Kim Sang Hoon and the production team. Though there is a penchant for dark scenes, Producer Director Kim showcases the story and ratchets the tension like a master. I expect the finale not to disappoint. Writers Ko and Han have crafted a stellar story, more intricate than expected. Producer Director Kim has demonstrated his mastery for this genre. Needless to say, the cast will bring it once again.

Genius profiler Oh Hyun Jae (Jang Hyuk) saved the trapped female police officer from Dong Sik’s planted bomb, unlike 5 years ago when Hyun Jae couldn’t save Yi Soo. Hyun Jae realized Dong Sik planted a bomb on Yi Soo’s car and deliberately imploded the car with Hyun Jae right next to it. It was designed to either kill or destroy Hyun Jae by not being able to save the woman he loved. Hyun Jae reached out to Detective Cha to find what he needed, what Dong Sik was searching for in the bullpen. I liked that Hyun Jae reached out to Team Lead Hwang. He hasn’t cut her out of his life. Dare I hope that he understands how Dong Sik tortured and manipulated Team Lead Hwang into saving Yi Soo’s name. I’m also hoping that saving the female police officer and knowing that he never had a chance to save Yi Soo, will allow Hyun Jae to heal after all this is done.

Team Leader Hwang Ha Young (Jin Seo Yeon) had a gun on Dong Sik but let him drive away. That seemed a bit lame, Dong Sik holding the detonator to get away. Why didn’t Team Lead Hwang shoot him in the leg and disable him? Forget it, 90% of this episode was excellent, it only started to lag a bit in the final act. Dong Sik once again had Team Lead Hwang in a headlock and tried to strangle her to say Hyun Jae’s name. This time she got away and was ready to handcuff Dong Sik…and then Joo Sa Gang arrived.

Officer Kang Dong Sik (Eum Moon Suk) activated the left hand serial killer Joo Sa Gang. Is there a better reason than Dong Sik wanted two serial killers in play? What is the connection between Hyun Jae and Dong Sik? When did they meet? When and why did Dong Sik start hating Hyun Jae and trying to best him?

One episode to go. What’s my wish list for the final episode?

* Dong Sik dies or is captured. Frankly, I’d prefer dead. We now know the entire series is about Dong Sik’s imagined or real relationship with Hyun Jae, everyone else was pawn in Dong Sik’s game with Hyun Jae.

* No one else dies. RIU Team #1 has taken enough losses. Chief Park is an option for one more body. He’s still willing to kill to keep the secret that the peppermint candy killer is alive not dead like he and Senior Chief Choi claimed and fabricated 5 years ago. Position and power are the only thing that matters to him.

* Healing is where this series should end.

** Team Lead Hwang. Her story was graphic, gripping and traumatic. How she even functioned is beyond me. I want the series to end with Team Lead Hwang living life again.

** Detective Cha. She has had closure on who killed her mother, but her serial killer partner is an open issue. I would love the series to end with Detective Cha being confident that she’s a good detective. She is, she just doesn’t believe it yet.

** Hyun Jae. We’ve seen Hyun Jae coming back to life during this series. He’s been empathetic and a hero multiple times. I’d like the series to close with Hyun Jae living a life where he gives and accepts friendship from others. He’s hinted at it, but catching Dong Sik to learn who ordered Yi Soo killed was the overriding goal. With Dong Sik eliminated, Hyun Jae should move on and regain a life worth living.

I rate this episode as almost excellent, 9.5 on a 10-point scale. 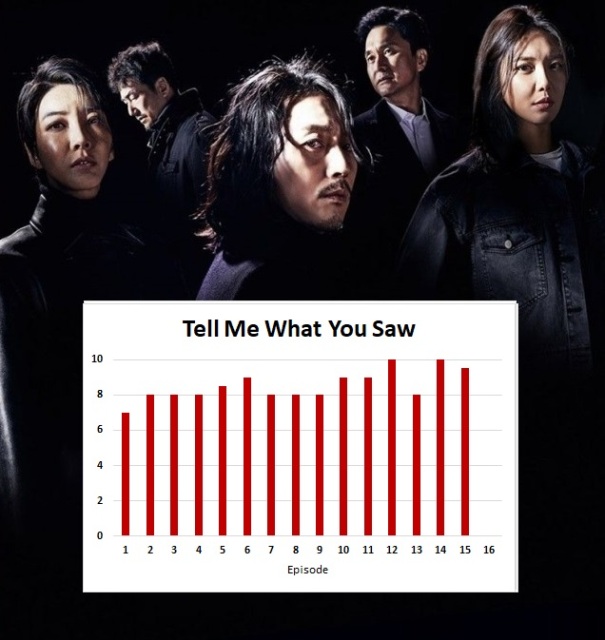 6 comments on “Tell Me What You Saw Episode 15 Recap”