The Game Towards Zero Episode 13

The Game Towards Zero Episode 13

Happy he’s woken from the coma; the team gathers around Tae Pyung. He looks into their eyes. Kim Tae Pyung (Ok Taec Yeon) can’t see their death. He wonders if his sight is gone. The police arrive and question him about trying to murdering Do Kyung.

Lawyer Lee Yeon Hwa demands to know if Tae Pyung engaged the bomb maker for a bomb to kill Do Kyung. Tae Pyung confirms it. He explains that Tae Pyung was going to kill everyone with an explosion and the only way to stop it was to kill Do Kyung. Lawyer Lee wants to postpone the deposition. Tae Pyung wants to tell the truth. Lawyer Lee snaps that truth will guarantee his arrest and imprisonment. Then he won’t be able to save anyone, even Joon Young. That gets Tae Pyung’s attention.

Detective Seo Joon Young (Lee Yun Hee) stands in the hallway and listens. When Tae Pyung declares he was willing to murder, she steps into the room. She says it wasn’t murder, it was attempted. Joon Young tells Lawyer Lee she’ll try to insure he won’t be imprisoned after the interrogation.

Tae Pyung watches the video of him pouring out the blood. The officer asks why he did that.

Joon Young explains to another officer that Do Kyung is alive. She shows him the villa where the team believes Do Kyung treated his wounds from the explosion. She shows him the body of the maid Do Kyung killed. She points out the police need Tae Pyung’s help to catch Do Kyung.

Tae Pyung admits to hiding evidence and planning to kill Do Kyung. Tae Pyung explains that the detectives are in danger from an explosion. The officer wants to know how Tae Pyung knows this. 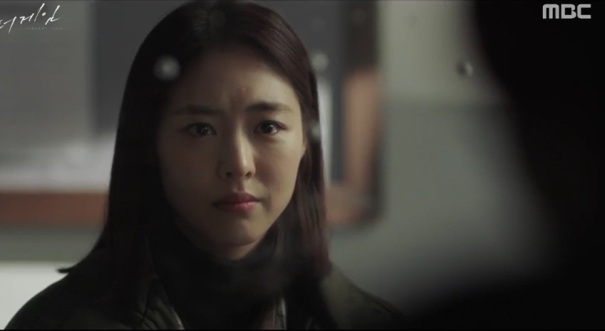 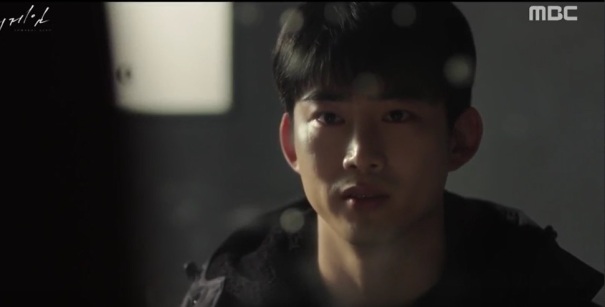 Goo Do Kyung (Im Joo Hwan) visits his father’s grave marker. He apologizes for being late.

Flashback…Do Kyung takes a hair sample from his father. His father recognizes him. Do Kyung flees. He didn’t think his father would recognize him. He watches the bus with his father go into the prison gates. Do Kyung hopes they’ll meet again.

Flashback…Do Kyung checks the DNA analysis and realizes he’s father’s DNA is NOT a match for the murderer. He wonders how. 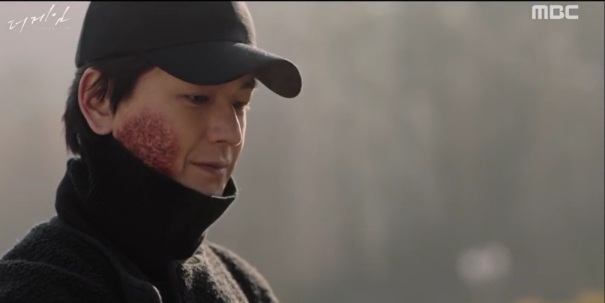 Do Kyung tends his father’s grave. He thinks he’s father is finally at peace. They’ll meet again in the next life. Do Kyung murmurs he’ll see his father soon.

Team Leader Han Dong Woo gets a call from Chief Yang Ju Il to return to the station. Joon Young and Lawyer Lee exit the police station and confirm Tae Pyung has been arrested. Joon Young notes it is clear that Tae Pyung destroyed evidence about Teacher Baek’s death. Officer Joon and Officer Bong sigh. Lawyer Lee gives Chief Nam letter Tae Pyung wrote about the bomb incident that will kill them all.

Do Kyung gets items out of a locker and drives away.

Chief Nam gives the letter to the other team members to read. As they drive back to the station, they wonder if Tae Pyung’s death scene could be wrong.

Do Kyung reads news reports of the accident.  He’s surprised to learn Tae Pyung is alive.

The team is surprised to find Do Kyung’s mother at the police station. She shares that Do Kyung met her at the airport. She’s worried her son is planning something. Chief Yang enters and declares the commissioner is promoting him and there will be a big ceremony next week. The team looks at each other. Chief Yang explains that police higher ups are desperate to cover up Tae Pyung’s bombing that they decided to replace that story with Kim Hyung’s arrest and thus promoted Team Leader Han for a big splash ceremony. Team Leader Han says a bomb will go off at the ceremony. That gets Chief Yang’s attention.

Joon Young tells Do Kyung’s mother they are all worries just like she is. She says she’ll stay in Korea for the time being. She asks for her son’s address. She tells the police she can go alone. She wants to clean up her son’s messy home.

OMG, this police team is nice but Writer Lee makes them do stupid things!

Do Kyung’s mother cries as she examines his home and basement.

Joon Young considers the death that Tae Pyung described. She calls Captain Lee and asks him to come to the police station. He agrees.

If I were them, I would NOT show up.

Tae Pyung is asked by the officers who arrested him if he can see death. They tell him there will be a promotion ceremony next week.

As Captain Lee leaves for the night he tells young reporter Yi Ji not to work too late. Do Kyung calls her and referencing the article she recently published asks to meet dangling the promise of information. Reporter Yi agrees to meet.

The officers release Tae Pyung. They say they don’t believe in his ability but hope there isn’t a bomb explosion.

Joon Young takes Captain Lee to his temporary digs. She tells him to rest.

Do Kyung tell Reporter Yi that she won’t be hurt if she does as he says. He asks if she can confirm if Tae Pyung is alive. While she hasn’t seen him, she believes he’s alive. She finds it interesting that Do Kyung’s focus is Tae Pyung. Do Kyung asks if she sees him as a victim or murderer.  She doesn’t answer. Do Kyung directs her talk to Reporter Han and find out who Tae Pyung acquired the bomb from. He shares he’ll be purchasing his own bomb. 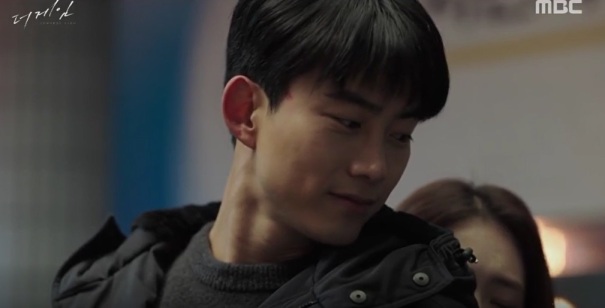 Joon Young is happy to Tae Pyung. She gives him a back hug.

At Tae Pyung’s house they catch up. Joon Young doesn’t know why Tae Pyung was released. He doesn’t know either. She asks if they can spend the night together. Joon Young says tonight, she’ll sleep in the same bed with him.

Joon Young and Tae Pyung are awkward as they sit on the edge of the bed looking at their phones. Joon Young plugs her phone in. She sees the letter Tae Pyung wrote to her in the event of his death. He takes it from her. Joon Young tells him she’s okay when he’s by her side. Tae Pyung apologizes for the bomb to kill Do Kyung and himself. He admits he can no longer see death of anyone on the police team. He worries he’s the reason everyone will die.

Reporter Han answers Reporter Yi’s phone call. He confirms Tae Pyung got the bomb. She asks about the bomb maker. He texts the sticky note where the police wrote the bomb maker’s name.

Tae Pyung and Joon Young watch each other and smile. She reminds him of how they met.  She says she’d never have guessed they’d end up in bed together. She snuggles close to Tae Pyung and says no one knows the future.

Tae Pyung looks in the mirror. He can see his death but none of the others. Tae Pyung vows to protect the Joon Young and the police team.

Do Kyung emails the bomb maker. He gets an immediate response with price.

The next morning, Chief Yang asks why Chief Nam is hanging around. He tells him he’s resigned and needs to back off. Chief Nam says they’ll all at the promotion ceremony too.

After the meeting Chief Yang declares they’ll have the bomb team at the ceremony and use them as official photographers.

Tae Pyung wakes and finds himself alone in the bed. There’s a note and breakfast waiting for him. Joon Young’s note says she’s not a good cook. Tae Pyung cringes at the food. 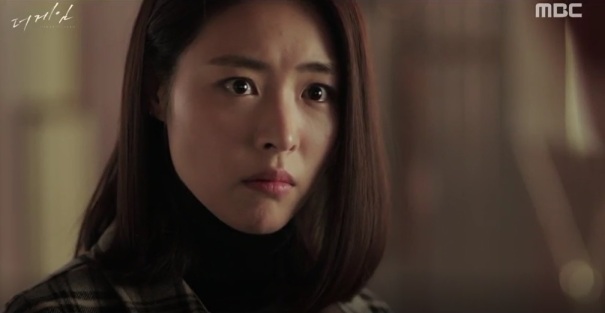 Officer Bong and Officer Joon call the bomb squad to schedule a training exercise on the day of the bomb. Joon Young calls Tae Pyung and informs him that they believe Do Kyung is buying the bomb from the same bomb maker Tae Pyung used. She says the photo of the bomb is the same phone Tae Pyung saw in his death scene. She tells him that the bomb maker will use a courier service to deliver the bomb to Do Kyung.

Do Kyung gets deposits the money for the bomb in the account the bomb maker specified.  Reporter Yi tries to alert a pedestrian but to no avail. Do Kyung warns her further bad behavior will have consequences.

Joon Young and Tae Pyung try to locate the bomb maker through a contact but the contact refuses to talk. Tae Pyung admits he bought a bomb too but now he’s trying to save people. Tae Pyung gets on his knees and begs. IT doesn’t work.

Joon Young assures Tae Pyung that he did his best. They agree to join the search for the bomb maker. In a twist of so close but so far, Team Leader Han walks past the bomb maker but doesn’t recognize him because of the mask he wears. Officer Bong finds the delivery man that the bomb maker uses. Everyone converges on that point.

Reporter Yi is in the trunk. Do Kyung waits. 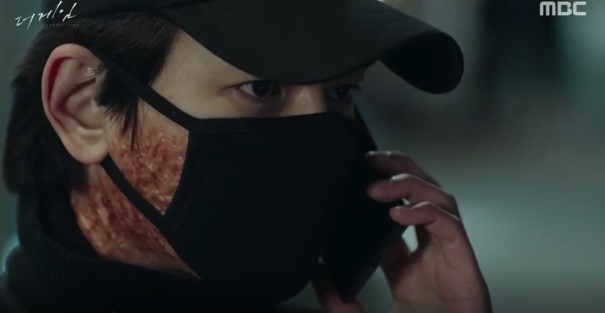 Tae Pyung receives a call from Do Kyung. He has the bomb. Do Kyung asks how it feels to have everything fall into place just like he predicted. Tae Pyung rushes to the street and looks for Do Kyung. He spots him across the street. Do Kyung tells Tae Pyung that he’ll regret surviving the bomb explosion he set off to kill them both. Tae Pyung yells that Do Kyung should just kill him. Do Kyung counters they must be together at his death. Do Kyung taunts that Tae Pyung will be left alone and everyone’s death will be his fault. Do Kyung gets in his car and drives away. Tae Pyung, Joon Young and Team Leader Han can only watch it happen.

Do Kyung buys the bomb. Writer Lee gave Do Kyung every advantage this episode. I am tired of evil always winning. Even if in the final episode things work out, having this many episodes with evil advantage has made this a frustrating series to watch.

Kim Tae Pyung (Ok Taec Yeon) watched Do Kyung drive away with the bomb. Tae Pyung is being mentally tortured by Do Kyung, who blames him for everything. Tae Pyung is heavy with guilt and believes it on many levels. It’s irksome.

Coroner Goo Do Kyung (Im Joo Hwan) can’t lose. Do Kyung is a murderer with a bomb. He has Reporter Yi hostage which will guarantee Captain Lee will agree to become the human bomb to save her. I’m so frustrated by this character and Writer Lee; I won’t write anything else.

I rate this rate this episode as good, 7 on a 10-point scale.

3 comments on “The Game Towards Zero Episode 13”