Tell Me What You Saw Episode 7 Recap

Tell Me What You Saw Episode 7 “Reflection”

Detective Cha Soo Young (Sooyoung) arrives at the scene with the car. The police and forensics are examining the scene. Detective Cha asks if they found a note. She asks to examine the car. The police officer that she encountered on the suitcase night tells her to get lost. He doesn’t care that she knows the boy. She sees her former partner and explains she met the missing boy and gave him a note with her phone number. Just then the police are ordered to search the hills for the missing boy. The police officer in charge declares they should switch to locating the body because the boy couldn’t survive for 27 hours in the hills. Detective Cha tells him the boy could still be alive. Prove it the officer says. He tells her the pervert cut off his ankle bracelet. He orders her removed. Her former partner rushes to escort her.

Detective Cha holds the “direct to Hyun Jae” earpiece. She hesitates then puts it in her ear.

Genius profiler Oh Hyun Jae (Jang Hyuk) hears the beep and puts his earpiece in. Detective Cha says she’ll accept his offer. But first she needs his help to find a missing child. He asks if she knows the child. She confirms this. Hyun Jae says the child won’t survive longer than 30 hours alone in the hills. He tells her to meet him at the school where the child was abducted.

Hmm, the child has minimal hours left, he’s up in the woods, but let’s meet at the school?

Hyun Soo hides from the pervert once again. He cries hoping he won’t be found. The pervert finds him.

Section Chief Choi Hyung Pil tells the Chief that working the missing child case will have benefits. He assigned the case to RIU Team #1, he hopes Hyun Jae gets involved, if they fail, it’s good for them. The Chief asks if he did assign the high-profile case to deflect the press’s negative attention about the peppermint candy killer and create a reason to fire Team Lead Hwang. Section Chief Choi’s smile is a yes.

Hyun Jae tells Detective Cha that the boy was likely frightened by the pervert and took the opposite route when he left the school.

He got that right.

Hyun Jae and Detective Cha find the spot where the boy hid and where the pervert, pulled the boy out of his hiding place. Hyun Jae finds the boy’s top. Hyun Jae declares the pervert dragged the boy away. He states they must go to the pervert’s house.

RIU Team #1 arrive at the local police station and are informed the suspect is a known pervert. Detective Yang says the pervert doesn’t have family. She directs Detective Jang to contact the pervert’s previous victim’s parents.

The former victim’s father doesn’t want to talk about what happened to his son. He says the pervert almost beat his child to death but he only got 2 years in prison. He tells them to catch him, find the boy, and put the pervert away for a lifetime. They decide to search the reservoir.

Nice job having both Hyun Jae and Detective Cha examine her memory together!

Detective Cha and Hyun Jae arrive at the blanket factory. They show the picture of the child to the workers. Hyun Jae notices a worker with dusty boot and watch that doesn’t belong to him. The man runs. Detective Cha takes off after him. Hyun Jae takes a more leisurely pace. They lose him. Hyun Jae believes he is hiding in a storage facility. Hyun Jae goes upstairs while Detective Cha searches downstairs. We see the man hiding. The rest of RIU Team #1 arrives. The man and Hyun Jae fall from the second floor. The man tries to attack RIU Team #1 but they arrest him. They ask what he knows. The man claims he buried a body. Detective Cha grabs him and demands details.

The police dig where the man indicated. They find something. They unearth the pervert in a bag. Hyun Jae says the boy is somewhere where he can’t make a phone call.

What? The pervert is dead? Who killed him?

The boy frees himself from the bag. He’s in a house filled with toys. He sees a phone. He tries to call Detective Cha. A woman walks into the room and cuts the phone line.

Detective Yang and Detective Jang interrogate the man who admits to killing the pervert. He claims he can’t remember what happened to the boy.

Hyun Jae wonders who crashed into the pervert’s car. Detective Cha reports none of the collision centers received a car with damage like what they are looking for. Hyun Jae finds it odd that the man has a lawyer. He tells Detective Cha to find the lawyer and all the background about the man she can.

The boy is dressed in nice clothes. The woman makes him food. She gets a call and tells the boy she’ll be back soon.

OMG! It’s the lawyer that hit the pervert’s car!

The boy says he wants to go home. She pats him and tells him to stay put. She says he can’t leave. She won’t let him get in an accident like he did before. She tells “her son” she will return son.

This poor kid is living in an endless nightmare!

Hmm, it’s NOT the lawyer that hit the pervert’s car.

The boy cries. He tries the doors but they are locked or go nowhere. He finds a key.  He unlocks a door to a bedroom. He sees a picture of the lawyer and a boy in the same suit he’s wearing. He sees a bump under the bed. He pulls back the covers and finds a large stuffed animal.

That was a relief.

Hyun Jae and Detective Cha arrive to observe the interrogation. Team Lead Hwang says the man claims he can’t remember. Detective Jang enters and reports that Lawyer Kim was the man’s advocate. Hyun Jae says Lawyer Kim is grooming the man. He believes Lawyer Kim had the fender bender with the pervert.

Hyun Jae says Lawyer Kim killed the pervert and called the man to bury the body.

Flashback…Lawyer Kim open the trunk and finds the boy.

Flashback…The man arrives at the scene, puts the pervert’s body in the trunk and drives him it to the mountain to bury.

RIU Team #1 arrive at Lawyer Kim’s office. She sees them pull up and exits the office before they get there. Detective Yang reports that Lawyer Kim escaped. Detective Lee locates her vehicle on CCTV. He calls the license number. Detective Yang and Detective Jang sees her car and force her off the road.  She runs down a bank dragging a suitcase. BUT it isn’t Lawyer Kim. It’s another woman. She claims she was only doing what Lawyer Kim told her to do. Team Lead Hwang opens the suitcase. It has body parts from a mannequin.

I KNEW a mannequin would be used in this series.

Lawyer Kim plays Jenga with the boy. She promises they’ll never be parted. The boy spies Lawyer Kim’s cell phone. He grabs it and tries to run.  He goes into a bedroom but can’t work the phone. Lawyer Kim bashes the doorknob off. She looks in the hole. The boy pushes her down and runs into the empty amusement park. Lawyer Kim follows promising that she won’t hurt the boy.

Hyun Jae says Lawyer Kim considers the boy her son and the police as obstruction to her happiness.

The boy hides. Lawyer Kim searches. Once again, the adult finds him.

The kid has terrible luck hiding.

RIU Team #1 arrive at the amusement park. They fan out. Hyun Jae and Detective Cha search together. Hyun Jae directs her to search a corridor. Detective Yang, Detective Jang and Team Lead Hwang find a building with an open door. Detective Cha finds the boy on the rooftop. He’s tied to a chair. She asks if he’s okay. Lawyer Kim approaches Detective Cha from behind with a wrench in her hand. The boy’s eyes widen in terror. Detective Cha turns and sees Lawyer Kim’s arm raised and poised to strike.

The kidnapped boy is going to need psychiatric help when this is done. Writers Ko Young Jae and Han Ki Hyun unfolded the story to reveal the connection points that weren’t immediately obvious. Producer Director Kim Sang Hoon and the production team kept the pace and situation perilous for the child that escaped sure death by the pervert only to fall into the clutches of Lawyer Kim who viewed him as her long-lost son. The episode opened with a statement stating the child actor would receive help to cope with what he had to portray. I see why. The break from the peppermint candy killer was welcome. Is Hyun Jae a sanctioned member of RIU Team #1?

Genius profiler Oh Hyun Jae (Jang Hyuk) realized Lawyer Kim murdered the pervert. That was a leap in logic to see that Lawyer Kim drove the car involved in the fender bender with the pervert, saw the boy in the trunk, murdered the pervert and called the man to move the pervert’s car and bury the body.  When Hyun Jae told Detective Cha that her empathy stemmed from seeing the similarities between the mute boy and her parents, he was right. When Detective Cha retorted that Hyun Jae had no empathy, she was right.

Detective Cha Soo Young (Sooyoung) mined her rolodex memory for answers to find the boy. She fed Hyun Jae the information he needed to draw the conclusions that allowed the team to track down the boy.

Team Leader Hwang Ha Young (Jin Seo Yeon) was assigned the boy’s case by Section Chief Choi. He didn’t do it because he believes in Team Lead Hwang or RIU Team #1 but because he wanted her and their failure. He wants her gone with a malice of a man that has something to hide. What is it? Does anyone else find her steely stare intimidating? 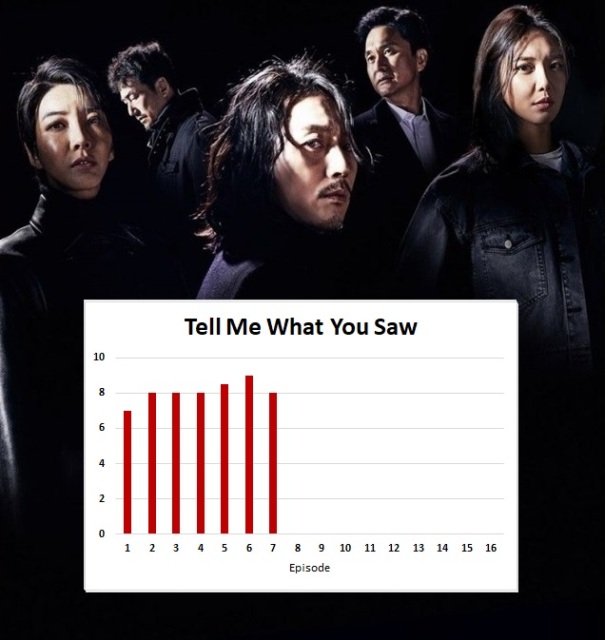 25 comments on “Tell Me What You Saw Episode 7 Recap”