An Dan Te (Sung Hoon) goes to the park and warns Manager Park not to interfere in his personal life again. Manager Park grumbles that he didn’t know Yeon Hwa was the woman he was interested not Ya Chae. 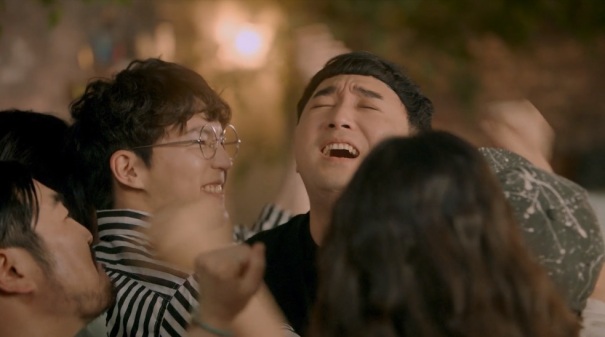 The next 60 days of development of the game at Joybuster fly by.  Joseph Lee, master coder, declares them done. Everyone is thrilled and a group hug ensues. Dan Te gives Joseph Lee his payment in private…girl band Artemis now follows him. Ha!

Shin Yeon Hwa (Han Bo Reum) is surprised to learn the hottest VJs are Kang Hoon and Sang Mi. Joybuster wants them to test and promote their game.

The NexViper CEO decides to mimic Joybuster’s new game and drop it one day before Joybuster. He also calls an emergency board meeting with the game association. That can’t be good. 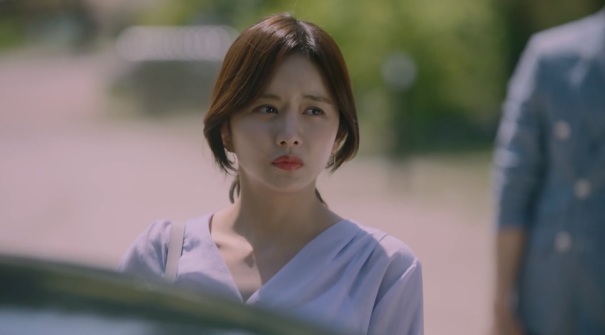 Yeon Hwa gives Dan Te her marketing plan. Their interaction is brief and all business. Dan Te asks if she’ll ever stop be mad at him. She asks that he not try and chit chat with her again.  Irked he quickly leaves.

Manager Park, Kwak Han Cheol (Baro), and Yeon Hwa drive home together. Han Cheol asks if Yeon Hwa enjoyed the limited edition game from Dan Te. Yeon Hwa never received the game. Manager Park declares Dan Te bought it for himself. Han Cheol knows that isn’t true and says so. He’s no closer to getting out of the friend zone with Yeon Hwa.

Dan Te is startled to find a mass of boxes sent by fans of Kang Hoon and Sang Mi (aka the nutty one and the crazy one). Dan Te storms through the boxes. Sang Mi tosses Dan Te a t-shirt with the title “the ruler”. She informs him their subscribers don’t know he name or face but he’s famous for what happens when he comes home and they are broadcasting. 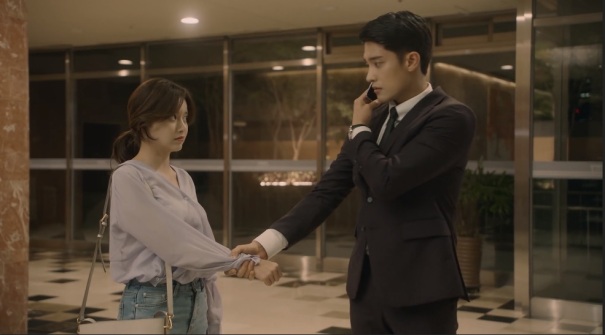 Everyone is surprised when Yeon Hwa shows up. She looks around the apartment (for the limited edition game). Dan Te warns her not to touch his turtle named Monday. Dan Te asks why she’s there. She wants the limited edition game and offers to pay for it. She grabs his arn and pleads. He pushes her out of the apartment and into the lobby. He declares he no longer has the game. CEO Bae Ya Chae (Kang Byul) calls back from the tour. She drives to the outside the apartment building. She spots Dan Te holding Yeon Hwa’s wrist. She gets mad and leaves telling Dan Te they’ll talk later. Yeon Hwa isn’t happy the limited game is gone. She tells him Kang Hoon is the best VJ to promote the new game. Dan Te declares he’ll handle talking to Kang Hoon. Yeon Hwa doesn’t think that’s the best idea given their relationship. Dan Te insists. Yeon Hwa leaves.

Notice he was holding her wrist and initiating touch.

When Dan Te return to the apartment he tells Kang Hoon the new Joybuster game will be released soon. Kang Hoon cuts him off and states he won’t help Dan Te promote the new game.  Kang Hoon doesn’t care that he’s living with Dan Te, he promises to move out soon. Dan Te doesn’t want him to leave while he’s a minor. Dan Te brings up Yeon Hwa is the game’s creator. Kang Hoon won’t be swayed. Dan Te isn’t happy with his rude ways.

Kang Hoon tells Sang Mi he won’t help Dan Te. They are pleased their subscriber base is growing. She points out Dan Te does care about him.

Flashback…Dan Te recalls his father kicking out a boy of the arcade that was mean to him. His father says they don’t need those kind of customers. He urges Dan Te to fight or tell him next time. Dan Te takes Monkey the turtle with him.

Kang Hoon returns to the apartment. Dan Te enters his room but he’s left something for Kang Hoon.

CEO Bae can’t believe the pile of work. She tells her assistant she’s got a list of creators for the new channel.

The Joybuster team discuss the next step in the game testing and release. Dan Te tells Yeon Hwa that Kang Hoon refused to help promote the game. She chides him for poor persuasive skills. She’s forced to find a different VJ. 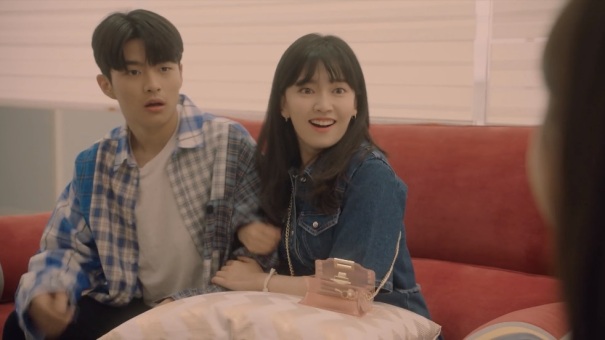 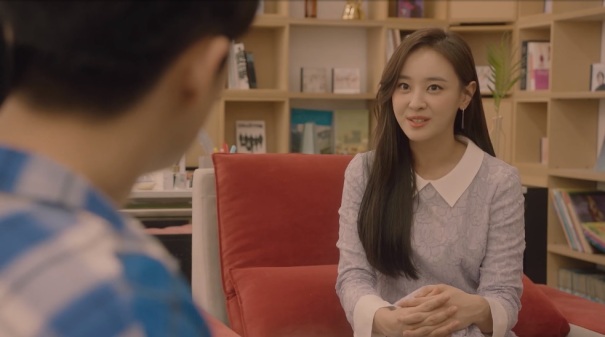 Kang Hoon and Sang Mi visit CEO Bae. She surprises both of them when she wants to sign them as talent for a new channel of YouTube creators. They are thrilled and eager to sign. Kang Hoon spots the limited edition game on CEO Bae’s desk. He informs her Dan Te purchased that Yeon Hwa, but since she has it, he must have been wrong. That wipes the smile off her face. She realizes the game wasn’t a gift for her, it was a gift for Yeon Hwa. She tosses the game in the trash.

Dan Te asks Yeon Hwa to share a cup of tea outside. He admits he’s at a loss on how best to deal with Kang Hoon. Yeon Hwa urges him to be honest with Kang Hoon about his feelings. If Kang Hoon needs something, give it to him. Dan Te admits his family wasn’t a loving one and showing feelings isn’t easy. Deciding that she can open up too, Yeon Hwa shares why that limited edition game means so much. She shares her younger brother wanted the game when they were little but it was a luxury item that wasn’t in the budget. Then her brother was killed in a car accident. That limited edition game always makes her think of her brother and she’s wanted to own it. Dan Te apologizes for triggering painful memories. She declares that’s why she makes games for a living. They stare into each others eyes. Yeon Hwa concludes family is family no matter what. She points out they are similar. In fact, Dan Te stated Joybuster was a form of family. They smile at the shared moment.

That was touching and sweet.

Kang Hoon and Sang Mi are stunned when they find a broadcasting booth that Dan Te purchased for them. Sang Mi goes to hug Dan Te but he stops her short. Ha! They share that they signed with CEO Bae today.

Han Cheol, Mi Ja and Manager Park share a drink and food. Manager Park shows off their couple ring. He encourages Han Cheol to get a girlfriend. Han Cheol can’t help but notice the world is full of couples. He wants to have a relationship with Yeon Hwa. 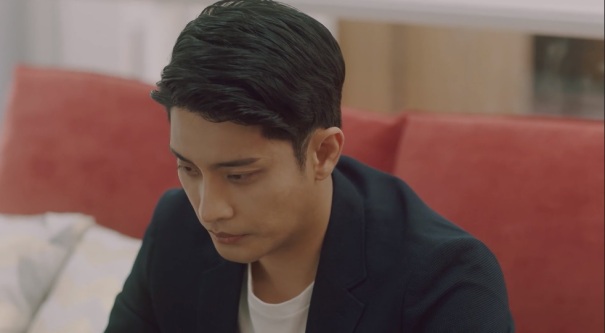 Dan Te visits Ya Chae at her office.  They discuss signing Kang Hoon. Dan Te asks Ya Chae to convince Kang Hoon to review the newest Joybuster game. She refuses to get involved. Dan Te asks for the limited edition game back. Ya Chae says she threw it in the trash. She says it was a gift for Yeon Hwa. Dan Te states there was a mixup and he’ll give her something else. Ya Chae tells him she missed him while she was away. She listened to Kang Hoon’s channel and relished when Dan Te would return home and she’d hear his voice.  Ya Chae knows now it is wishful thinking they will get involved. Dan Te admits she’s a wonderful person, but he can’t force himself to love her. Tears fill her eyes.  She cries after Dan Te leaves the office.

Another terrific conversation where Dan Te is honest and real. Ya Chae made herself vulnerable and laid her feelings on the table too. 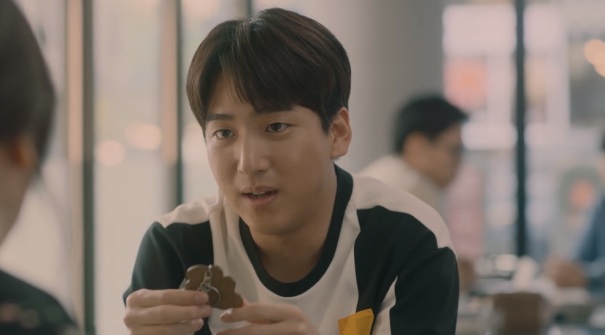 Han Cheol and he mother enjoy the day together. He shares the Joybuster keychain he carved for Yeon Hwa. He knows she’ll love it. His mother encourages him to go for it.

Kang Hoon and Sang Mi are dismayed to find Monkey the turtle dead in the tank. When Dan Te returns home, their faces alert him that something is wrong. Kang Hoon breaks the bad news. Dan Te sucks in a pained breath. He walks to the tank and sees it is true. He sinks to his knees.

Han Cheol calls Yeon Hwa who is working. He decides to visit her to give her the keychain and perhaps declare his feelings.

Dan Te cries as he drives with Monkey.

When Dan Te gets to work he says nothing to a questioning Yeon Hwa and gets a box from his desk and exits the building.

Dan Te digs a hole. He puts Monkey in the box. He starts to cover the box with dirt.

Dan Te struggles with covering the box with dirt. 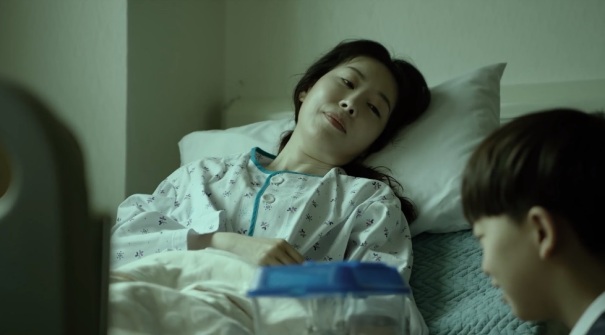 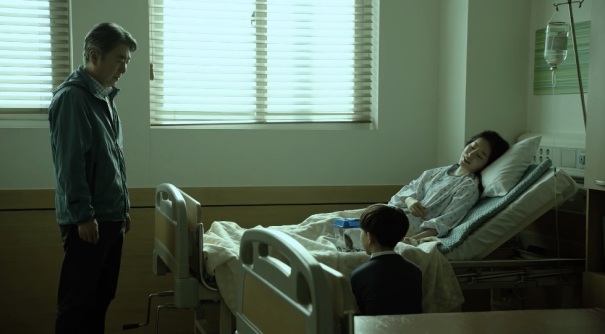 Awk! Tears! That was surprisingly touching.

Dan Te cries as he buries Monkey.  Yeon Hwa finds him crying and silently watches him from behind. Dan Te sobs his pain.

Han Cheol arrives at the office. 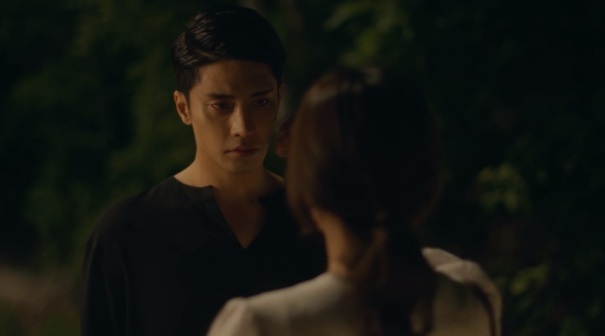 Dan Te is surprised to see Yeon Hwa when he’s finished burying Monkey, She apologizes for intruding. Dan Te claims he’s okay now. Yeon Hwa tells him to cry if that’s what he needs to do. Tears fill his eyes.

Yeon Hwa steps to Dan Te. She gently touches his face and wipes his tears. She gently hugs him. Dan Te accepts the hug. He cries. She cries.

Wow, he accepted her touch!

What a touching episode. Writer Kim Dong Kyu surprised me with his focus on family, honesty, past emotional milestones, and the turtle Monkey’s death. The episode had humor, conversations that felt real, and emotion. Bravo Writer Kim! The best episode of this series so far.

An Dan Te (Sung Hoon) had his heart broken when his touchstone family member Monkey died.  Dan Te had explained to Yeon Hwa that his family wasn’t warm but cold. The flashback that revealed his dying mother gave him Monkey and told him to consider Monkey family, explained why the turtle was a touchstone for Dan Te. Monkey’s death stripped away Dan Te’s veneer, revealing the grief and pain. When he buried his beloved Monkey, Dan Te couldn’t help but remember losing his mother. The sobs were real. When Yeon Hwa, the woman he loves, ended up reaching out to him with gentle support, he let her hug him and accepted her silent support. It was a lovely moment.

Shin Yeon Hwa (Han Bo Reum) reached out to Dan Te. She couldn’t help but feel empathy for Dan Te when she found him crying as he buried his pet. She offered a tender touch and gentle hug. It was exactly what Dan Te needed, human touch from someone he cared about. Will this trigger Yeon Hwa to realize she has feelings for Dan Te? The backstory of why she made games and why the limited edition game was important to her was revealed. While I’m not a huge Ya Chae fan, I understood why she threw the game away when she realized it wasn’t a gift for her. I appreciated the conversation between Dan Te and Ya Chae. She admitted she cared. He regretfully admitted he did not. He cares for another…Yeon Hwa.

I rank this episode (on a scale from 1-10) as terrific. My rating chart is below:

Tagged with: Episode 10, Level Up, Sung Hoon
Posted in Level Up