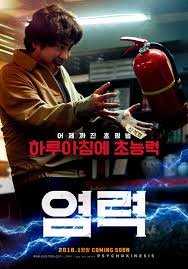 Review. Psychokinesis focuses on a father with special abilities trying to reestablish a relationship with his daughter during an eviction battle.
Synopsis. What if you and other small businesses owners were being forcibly evicted? What if you decided to fight against the thugs the corporation hired to evict you? What if your father who left when you were a child comes back into your life? Would you accept him and his special abilities? This is the basis for Psychokinesis.
More Details. Psychokinesis is a 2018 Korean film about a man, Shin Suk Hun (Ryoo Seung Ryong) that drinks meteorite water resulting in the telekinesis, strength, etc. He is estranged from his daughter, Shin Roo Mi (Shim Eun Kyung). When she reaches out to him during a crisis, he realizes he wants to reestablish their relationship. But her focus is fighting a forcible eviction with other small business owners. He uses his powers to fight the thugs that come to remove them. Can the eviction be stopped? Can father Suk Hun reconnect with daughter Roo Mi?

What I liked about Psychokinesis :

Superpowers + Humor + Father/Daughter Story. This story by writer AND director Yeon Sang Ho was a wonderful mix of superpowers, father/daughter relationship, fighting a corporation’s redevelopment all laced with humor in unexpected moments. Director Yeon (director of Train to Busan) and producers Kim and Lee used their CGI budget wisely and effectively among the setting of dilapidated buildings ready to be razed.

Ryoo Seung Ryong as the superpower father wanting to reconnect. If you’ve seen the kdrama Bad Pappa, Psychokinesis has a similar flavor of a father doing all within his power to reestablish the bond with his daughter. Suk Hun dealt with his newly found superpowers responsibly and focused on helping his daughter. The special effects when Suk Hun used his powers were well done. Ryoo Seung Ryong gave Suk Hun heart as he struggled to become respected by his daughter and deal with his new reality of superpowers. Suk Hun grounded this film and gave us father who wanted to be a hero for his daughter. As a viewer, I wanted him to succeed.

Shim Eun Kyung as the daughter fighting corporate development to save the cluster of small businesses and dealing with the father that left her long ago, now back in her life and wanting to stay. I loved Shim Eun Kyung in 2014’s kdrama remake of Tomorrow’s Cantabile. She hasn’t made a kdrama since but has been busy with films. Roo Mi reached out to her father during a crisis and wasn’t sure she was ready for his wish to reinsert himself back in her life. He had to earn the right and her respect. Roo Mi didn’t make it easy, nor should she. I liked this character’s passion for the fight and unwillingness to give up.

Jung Yu Mi as Managing Director Hong, face of the corporation ready to raze buildings and build a new development. What a delightful role this must have been for Jung Yu Mi. Managing Director Hong had wit and conviction that her path backed by power and money would win the day. I didn’t expect the humor laced in every scene Managing Director Hong graced. Suk Hun crushing her business card was memorable. I’ve watched Jung Yu Mi in many a kdrama, my favorite being her first, 2007’s Que Sera Sera.
What I did not like about Psychokinesis :
Some gratuitous violence. I may be reaching for a negative but the violence from/among the thugs could have been less and still gotten the point across.
Final Thoughts:

Psychokinesis was a winner. All the actors breathed life into this multifaceted story deftly directed and produced. You wanted the underdogs to succeed, the father and daughter to accept each other, and the superpowers to be measured not magical. Psychokinesis delivered on all counts.