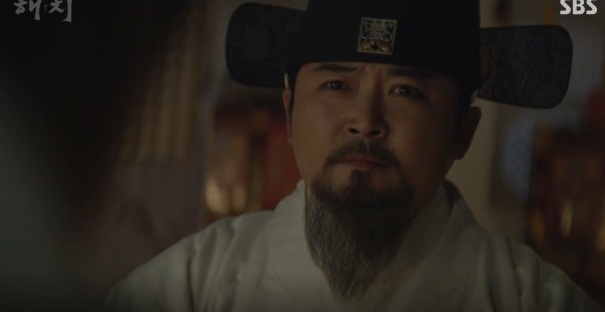 Yeo Ji has the honor of helping prepare the Prince Yeoninggun’s royal garments. She smiles knowing being near him is sufficient.

He’s not happy when his teacher and Park Moon Soo (Kwon Yool) resign. He accuses Minister Min of forcing them out. Minister Min counters that they did this to ensure his success as king. Minister Min says that King Yeoninggun doesn’t have the luxury of only being associated with supporters. Now he must embrace all factions to achieve his goals. A king must be willing to sacrifice the innocent and his personal friendships to achieve the goals of making the kingdom a better place for all people. The good of the many outweigh the needs of the few. Minister Min states the king will become lonely because his friends are gone. But his work is the most important thing.

King Yeoninggun goes to Dal Moon (Park Hoon) to find Moon Soo but it’s too late. King Yeoninggun is given a letter from Moon Soo where his friend declares his undying support but knows he must leave to the king can work with all sides to achieve his goals.

Yeo Ji thinks about Moon Soo leaving the palace and her assurance that leaving behind her life to serve the King is what she wants. She cries.

King Yeoninggun thinks about Moon Soo leaving the palace and how they grew as friends. He murmurs that being the King is indeed lonely. He cries. 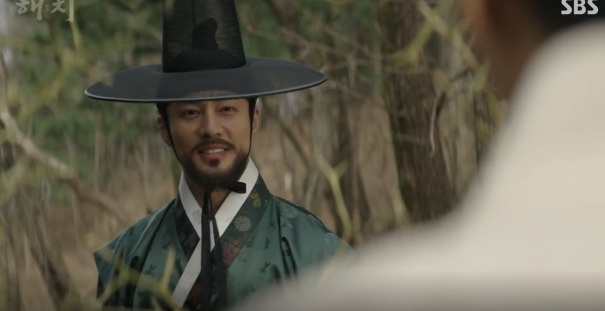 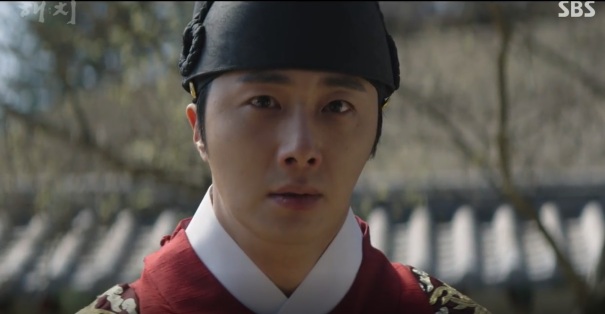 An unknown fluid is poured into the city’s well. Citizens get ill. Minister Min tells the King that a plague has descended on the city.

Will becoming King be harder than maintaining the position? Writer Kim Yi Young gave King Yeoninggun breathing room from the quagmire of political intrigue when his trusted advisors went to Minister Min and agreed to resign so the King had to rely on the Norin political party. The King feels alone without his posse. Team Evil gets a new addition from the third political party. Will King Yeoninggun ever catch a break?

* Evil Prince Milpoonggun was surprised when the evil Inspector and the unknown member of the third political party came to release him from his exile.

* Minister Min couldn’t believe when the King’s friends made a deal with him in exchange for the Norin’s support. He knew he wouldn’t make that sacrifice. You have to admit that Minister Min seems more ally than adversary in the last several episodes. I know that Minister Min wants the Norin political party’s dominance above everything, but he has helped the new King more than he’s hurt him. He also gives good advice from his perspective.

Inspector Yeo Ji (Go Ara) gave up her life to support King Yeoninggun inside the palace as a court lady. When will King Yeoninggun realize? Was Yeo Ji crying because Moon Soo left or that her life was forever changed or that loving the King from afar was all she’d ever be able to do?

Dal Moon (Park Hoon) kept quiet about Prince Milpoonggun’s concubine. Will he be able to ferret out the cause of the plague?

The second song of the OST is “Story Conveyed By The Wind” sung by Jun Woo Sung of Noel: