Home › Recaps › The Smile Has Left Your Eyes Episode 13 Recap

The Smile Has Left Your Eyes Episode 13 Recap

Kim Moo Young (Seo In Guk) spies Yoo Jin Kook (Park Sung Woong). He smiles, pats the area where Jin Kook stabbed him. Moo Young asks if he intended to kill him. He tells Jin Kook that killing him doesn’t suit him. Moo Young walks away.

That was a gracious exchange by Moo Young. I don’t think I’d be kind to the guy that just stabbed me and left me to bleed out.

Jin Kook ignores officer Eom Cho Rong as he walks into the police station. Cho Rong calls So Jung to alert her Jin Kook is in the building.

Yoo Jin Kan (Jung So Min) is all smiles at work. Her coworkers can’t help but notice. Moo Young texts that he was fired before he could resign. They agree to meet after work.

Moo Young stares at Mount Gemah on the map. Doctor Yang told him his father died there.

Moo Young waits for Jin Kan. When she arrives, she calls to him using his real name – Kang Sun Ho. They take pictures as a couple. Jin Kan shares that Moo Young’s name means sun kind elevated. Jin Kan declares it is a nice name picked out by nice people. Moo Young considers sharing that his father killed himself but decides against it. Jin Kan admits she wishes she knew her real name. She declines Moo Young’s offers to help her determine her real name. She’s sure one day her brother will tell her the truth about her past.

Jin Kook visits the temple and prays for Kang Soon Goo, the man he killed.

It can’t be any clearer that Moo Young is the son of the man Jin Kook murdered.

They have a sweet vibe.

Moo Young tells Jin Kan he’s going to return to his home town and visit the mountain where his father died. He declines Jin Kan’s offer to join him. Moo Young wonders what to say to his father. Jin Kan suggests hi and from his heart. Moo Young agrees. Jin Kan is concerned about Moo Young going to the mountain by himself. Moo Young assures her all will be well.

Moo Young stares at the old drawing of his family.

Jin Kook grapples with the fact of who Moo Young really is.

During the bus ride to the mountain, Moo Young recalls telling Psychiatrist Yang Kyung Mo (Yoo Jae Myung) that he will pursue the truth about his father’s death. He recalls the dream where someone killed his father.

Moo Young hikes the mountain to the cliff where his father died. He pours out the soju he purchased to honor his father’s memory. He lies on the ground and lets his subconscious bring the image of his father to the forefront.  He has a memory of playing on the mountain. He backtracks to the sign from his memory. The memory of playing a mountain with another child named Yoon is jarred loose. In front of a house, Moo Young sees another item from his memories. He wonders if he’s found his family home.

Wow, those are breakthroughs!

Jin Kook gets nervous when Doctor Yang tells him Moo Young knows a gun was involved in his father’s death.

Moo Young gets home and deliberately doesn’t answer a text from Jin Kan. He tears Jin Kook out of the early picture in his wallet only keeping Jin Kan.

So Jung finds Jin Kook drinking. Jin Kook describes Moo Young as a car with no brakes that could destroy Jin Kan, so he had to intervene. Jin Kook muses knowing Moo Young is the child doesn’t shift him away from protecting Jin Kan, after all Moo Young once said an eye for an eye was his preferred methodology.

The next day Moo Young meets Jin Kan and tells her about the house. Then he lies that the house wasn’t his early home. He queries her when she and her brother moved to Seoul, what days her brother has off, etc. He claims to be interested because he once considered being a police officer.

Moo Young, who watched them leaves, searches their house. He finds the missing child flyer. He turns off the stove with the pot on it.

Jin Kook realizes he left the stove on. He drives back home. He passes Moo Young in the street. They stare at each other. Jin Kook finds the pot in the sink. He goes into his room and finds the missing child flyer gone.

Moo Young has the old toy and missing child flyer on the table in his apartment.

He goes to Executive Jang’s office and asks to see her. Not wanting to appear too eager, she declines. Moo Young shrugs. The assistant tells Moo Young to return in 2 hours.

Oh no, Moo Young is going for revenge.

When Moo Young returns, he surprises Executive Jang with a request for a gun. She declares that is not easy and asks what Moo Young will do in return. Anything is his response. He gives the missing child flyer to Executive Jang and asks her to find out everything about the child, why he was be searched for, and the details of the child’s parents.

Yep, the sweet Moo Young is fading away.

Jin Kan gets So Jung to admit that she’s interested in Jin Kook. She sets them up to see a movie together. She smiles as they walk into the theatre. She texts Moo Young.

Jin Kan sees the old toy on Moo Young’s coffee table when she arrives at his apartment. When Moo Young returns, Jin Kan has the toy moving. He claims he found it during his visit to their old hometown. He can’t get his mind off Jin Kook. We see he watched So Jung and Jin Kook going into theatre. Jin Kan gets his attention. Moo Young stares into her eyes and tells her no matter what happens, she will always be essentially her to him. Jin Kan doesn’t understand. Moo Young smiles and puts his head in her lap. She hugs him. He looks pensive.

Yep, he’s now the stalker. Not good for his long-term outlook and certainly if he tries to kill Jin Kan’s brother, it may implode their relationship.

After the movie, So Jung gently chides Jin Kook for not being in the moment. He admits Moo Young broke into the house today. So Jung isn’t happy to hear that.

When Moo Young arrives at Executive Jang’s office, she tosses a hand gun to him. She points out if Moo Young uses the gun to kill someone, she could get in trouble too. Moo Young admits he doesn’t understand why she’s helping him. Executive Jang declares that Moo Young is a kindred spirit and she digs him. She wants him to be hers to control. She brings up Moo Young telling Seung A not to be caught and thereby spurring her to drive quicker than their pursuer. Executive Jang brings out the missing child flyer and surprises Moo Young with the news that his girlfriend’s brother was the police officer searching for the child.

Moo Young and Jin Kan text. She has to work late.

At his apartment, Moo Young loads the gun.

Jin Kook sits in a bath and ponders.

When he returns home, he spies Moo Young’s shoes. He calls to Moo Young who exits the bedroom holding a gun. He takes aim at Jin Kook. They stare at each other.

Knowing more about the past derails Moo Young. He found his old house and memories returning including playing with another child and the face of the man that shot his face…Jin Kook’s face. Revenge now becomes the priority for Moo Young. Sigh, I knew something would derail his reform. Knowing Jin Kook killed his father is a big deal. But I still wish Moo Young wouldn’t revert to the darker side of himself.

Kim Moo Young (Seo In Guk) learned his father was killed by Jin Kook. When he went to Executive Jang for a gun and answers he also learned Jin Kook was the police officer searching for him. I was a bit surprised when he admitted he was the missing child in the flyer. Jin Kan doesn’t realize that Moo Young is hardening his heart and preparing to take aim at her brother. Will Moo Young pull the trigger?

Yoo Jin Kook (Park Sung Woong) knows Moo Young is dangerous. He wasn’t surprised to find Moo Young at his house. He knew that retaliation had to be metered out. After all, he killed Moo Young’s father.

I rank this episode (on a scale from 1-10) as terrific. My episode ranking chart is below. 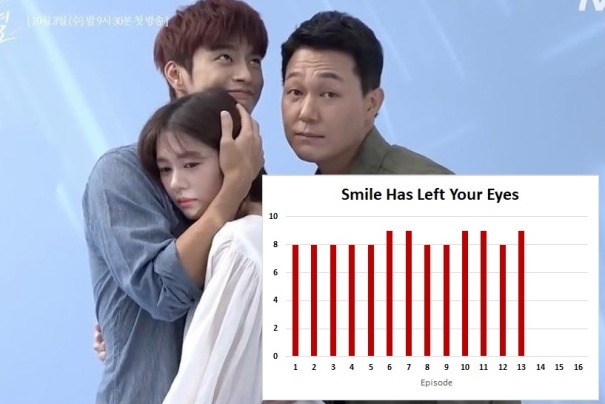