While Yoo Young Sun (Shin Eun Soo) is in the middle of a wheat field and looks around. She wakes to find herself alone in a hospital room. She slides out of bed and collapses onto the floor. Her leg muscles don’t have the strength to hold her. Bad news for our dancer. 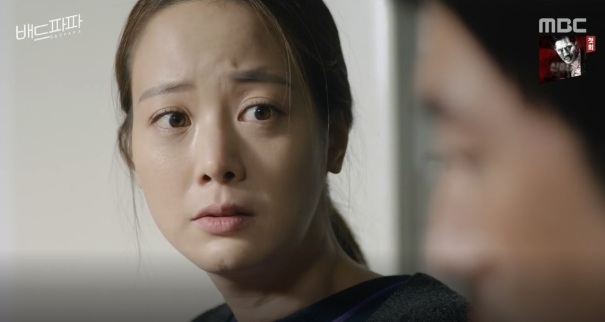 Yoo Ji Cheol (Jang Hyuk) and Choi Sun Joo (Son Yeo Eun) (Ji Cheol’s wife) hear the doctor’s verdict that their daughter has a muscle disease. Sun Joo can’t believe it. Ji Cheol flashes back to getting the same diagnosis from his doctor. Ji Cheol recalls his doctor stating his disease was no longer progressing. Ji Cheol asks his daughter’s doctor if the disease can be paused, what would that mean for their daughter.

Ji Cheol finally tells Sun Joo about his disease. She feels like an idiot for not realizing. She shows him the pill case with a single blue pill that he dropped. Ji Cheol claims it is for headaches. Sun Joo counters that originally it was a nutritional supplement. Kim Yong Dae (David Lee) rushes up stating Young Sun is awake. 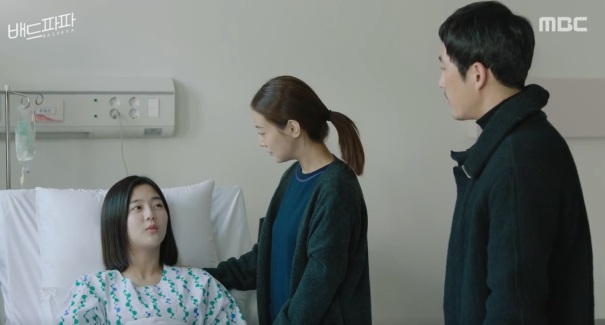 Detective Cha Ji Woo (Kim Jae Kyung) recalls Doctor Cha’s assistant claiming that Ji Cheol was a test subject and he stole the blue pills. Her call to Ji Cheol is interrupted when another officer hands over the glasses her now dead partner wore. Confused she stares at the glasses. Her partner didn’t wear glasses. Later the officer reveals the glasses had a microchip. She watches the video her partner took inside the pharmaceutical company. She sees her father’s desk and the video of the test subject treatment and rejection.

As Ji Woo drives following her father’s cell phone signal, she recalls moments in the case.

Doctor Cha sits in an apartment.

Mr. Park arrives at the apartment and is ordered by the pharmaceutical company’s CEO, Jung Chan Joong (Park Ji Bin), to kill the doctor.

Dr. Cha is surprised when his daughter walks through the door. She tells her father that running is futile. Doctor Cha claims he was going to turn himself in. Ji Woo asks how many innocent test subjects would be killed for research. Doctor Cha explains the drug could save thousands. Ji Woo counters that his mantra of patients first must no longer be valid. She declares her partner was killed because of this mess. She tells her father it is time he takes responsibility and accept the consequences. 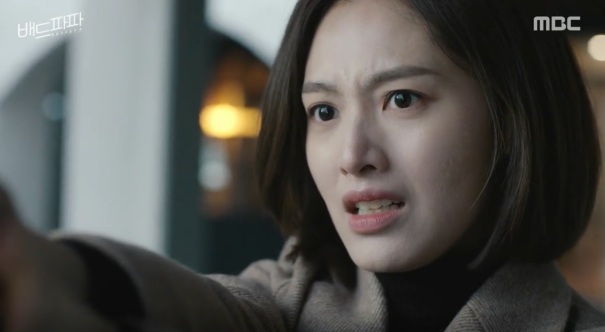 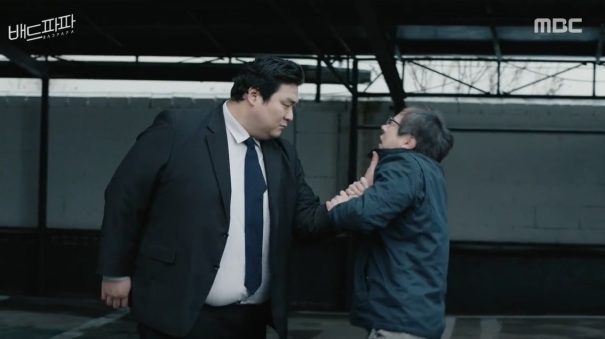 Ji Woo leads her father out of the apartment building. Mr. Park pushes her aside and prepares to knife Doctor Cha. Ji Woo pulls her gun and shoots Mr. Park in the shoulder. The backup police team arrives and takes Mr. Park away. Ji Woo watches her father drive away.

The gangster wants to kill the ZD producer to avenge his dead brother but realizes he can’t get to his target due to the bodyguards.

Doctor Cha finds the tracking device in his car. He destroys it. He calls his daughter. He tells her his punishment must wait. Ji Woo warns her father she’ll be forced to arrest him.

Ji Woo’s interrogation of Mr. Park is unfruitful because he won’t talk.

The gangster tells his gang that the right way to get revenge on the ZD producer is to hit him where it hurts…his bank account. He declares they must drain his bank accounts.

Ji Cheol’s former manager finds Sun Joo and Ji Cheol in their daughter’s hospital room. He takes Ji Cheol out for a bite to eat. He urges Ji Cheol to spend time with his daughter. Ji Cheol declares he has to keep his strength up so he can be there for his daughter. He shovels food into his face while worrying about his daughter.

Lee Min Woo (Ha Joon) wonders what the ZD producer is planning and his involvement in the past and present match with Ji Cheol. He wonders if Ji Cheol’s claim that he didn’t lose the fight all those years ago has merit. The gangster arrives and declares he’s got information that Min Woo needs to hear. He tells Min Woo about the blue pill that Ji Cheol takes and the ZD producer’s blackmail of Ji Cheol. He says that the ZD producer doesn’t deserve to be reported to the police. He leaves.

The ZD producer learns Ji Cheol’s daughter is ill and in the hospital. He smiles realizing he can use this to his own advantage. 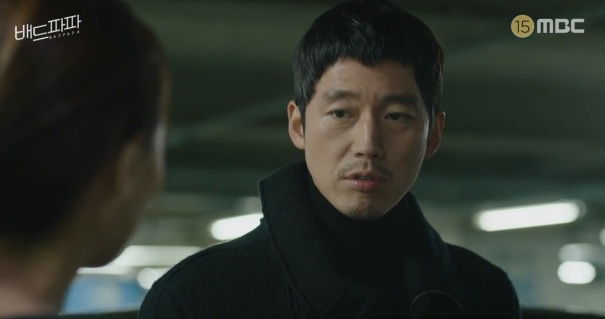 Ji Cheol tells his wife to stay by their daughter’s side while he goes to meet a doctor that could potentially help their daughter.

Ji Woo calls Ji Cheol and tells him they must meet. Ji Cheol defers the discussion explaining Young Sun is in ill and he must save her. 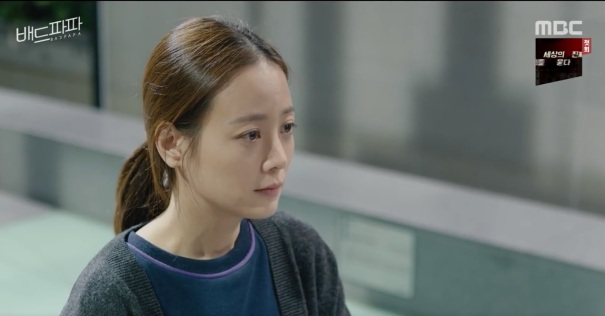 Young Sun struggles to breath. Yong Dae sends his training partner to get help. Sun Joo finds her daughter on oxygen when she returns to the hospital room.

Sun Joo learns Young Sun’s condition is rapidly declining and the doctor can’t reverse the disease. He says she has only 2 to 3 months to live. Sun Joo is devastated.

Young Sun wakes to find her mother by her side. She wonders where her father is. Sun Joo assures her daughter that her father will return soon.

Chan Joong is pleased that Ji Cheol survived. The police commissioner calls Chan Joong and warns him that he better clean up his mess. Chan Joong tells Doctor Cha to get the results they need. Doctor Cha leaves. Chan Joong orders the testing data be duplicated and his role in the company be erased. 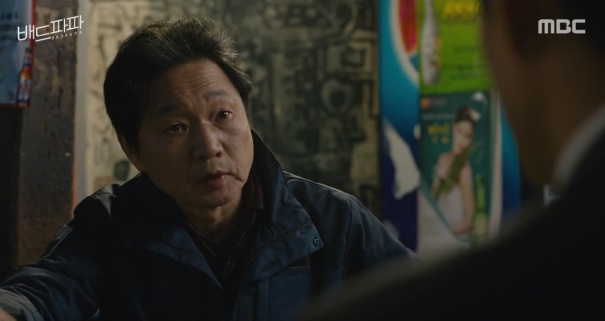 Min Woo’s demeanor was subdued. He respects the former manager and decided that Ji Cheol didn’t fix the fight all those years ago. 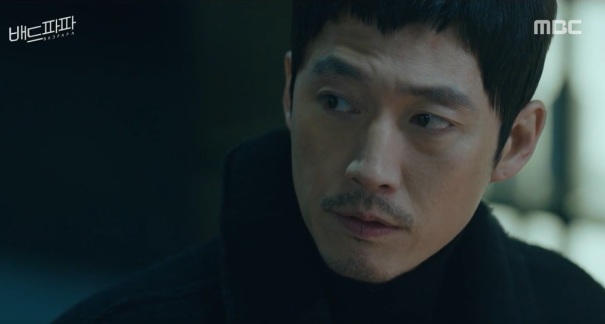 Ji Cheol can’t believe it when Doctor Cha and the assistant tell him the drug’s toxicity is reduced because of a special enzyme in Ji Cheol’s liver, and synthesizing it will take years. Ji Cheol panics that his daughter doesn’t have time to wait. The assistant suggests a liver transplant from Ji Cheol to Young Sun. He can’t guarantee it will arrest the progress of Young Sun’s disease. Ji Cheol agrees to the transplant. The assistant warns that Ji Cheol will be risking his own life. Ji Cheol knows his own body has been ravished by the drug. He tells Doctor Cha to proceed with the transplant. Doctor Cha warns there is only a 20% chance the transplant will save Young Sun. Ji Cheol doesn’t care. He declares the only thing that matters is Young Sun’s life. As a parent, his priority is protecting and caring for his daughter. 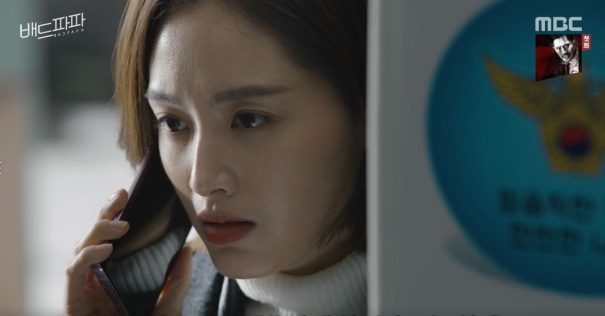 Chan Joong watches the conversation via hidden camera. He murmurs that if the drug can’t be synthesized soon, then he’ll shut down the lab. He calls Ji Woo to report his company’s illegal testing. Claiming he just learned about this, he tells her to come to the lab and get the evidence.

The police arrive at the pharmaceutical company. Chan Joong greets them. He indicates boxes of evidence he’s prepared. He tells them to search the premises. He states that Doctor Cha is the leading scientist for the illegal testing. Ji Woo and the police start searching.

The police burst in. Ji Woo stares at her father. She handcuffs him. She reads him his rights.

Who is the bad papa?  Ji Cheol started this series stuck in a rut of debt and distance from his family. Now he’s ready to sacrifice all to save Young Sun. The ZD producer got it right when he told Min Woo that Ji Cheol has never been driven by money. The man is a snake but understands human motivation better than anyone else on the show. Chan Joong was unmoved by Ji Cheol’s need to save his daughter and opted to save his own skin by throwing Doctor Cha under the bus. Ji Woo was forced to arrest her own father. Is he a bad papa? Doctor Cha put his work above human life and lied to his daughter. He deferred taking responsibility and altering his path. Min Woo finally saw the truth when the former manager convinced him that Ji Cheol didn’t throw the fight instead, he trained hard to be a good example to his protégé.

Yoo Ji Cheol (Jang Hyuk) is willing to do anything to save his daughter.  Writer Kim Sung Min tired Young Sun to the medical condition she likely inherited from her father. I thought the blue pill would be a treatment option for Young Sun. Nope, turns out the solution is a liver transplant from father to daughter. Ji Cheol didn’t hesitate and immediately agreed. The shining relationship of this show is between Young Sun and Ji Cheol. It is fitting that he’d give all to save her.

Only one episode remains. What’s my wish list for the finale episode?
* Young Sun is saved. She’s one of the more realistic teens on a kdrama. Her relationship with her father is a key driver for this show.
* Ji Cheol lives. It would completely blow if Ji Cheol died after a liver transplant.
* The Yoo family is able to rebuild. Sun Joo takes a back seat to Ji Cheol and Young Sun in this drama, yet her love for Ji Cheol is how the family began. Her support deserves a payoff. Let the Yoo family survive and thrive.
* The ZD producer is financially ruined. The gangster got it right. The only thing that matters to the ZD producer is increasing his personal wealth. I’d love to see Min Woo, the gangster, et all make the ZD producer a pauper.
* Chan Joong doesn’t evade punishment. The little weasel needs to be held accountable for his actions. Chan Joong and Mr. Park should end the show sharing a jail cell.

I rank this episode (on a scale from 1-10) as very good. My episode ranking chart is below. 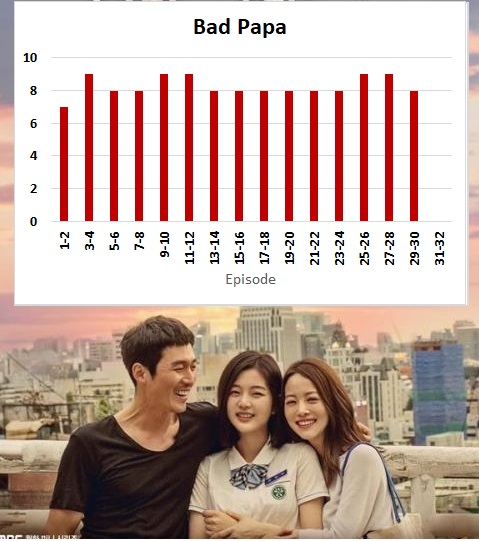