Sae Woo (Jung Ryeo Won) and Seo Poong (Lee Joon Ho) are at an overlook. He kisses her. Seo Poong admits he likes Sae Woo more than he likes Chil Seong. He says he’s a bad friend. He tells her not to hate him. He kisses her with feeling. Sae Woo responds. They kiss more. Once they break, Sae Woo asks what they do next.

Chae Seol Ja (Park Ji Young) asks Maeng Dal if he’s a gangster or a cook. He claims to be both. She offers to school him in proper knife skills.

Sae Woo admits she likes Seo Poong a ton. He feels the same. She’s worried what happens next. Seo Poong vows to care for her, be kind to her, and never hurt her. They admit their recent divorces were painful. Sae Woo suggests they might even love each other. Seo Poong agrees. He hugs her.

They’ve finally kicked pretense to the curb and are honest with each other. The mutual depth of feelings is nice to watch.

Chil Seong musing about the kitten and Sae Woo was darling. Even though he’d be kicking a cute puppy. Seo Poong started down the path of truth, but Maeng Dal’s interruption derailed his resolve. 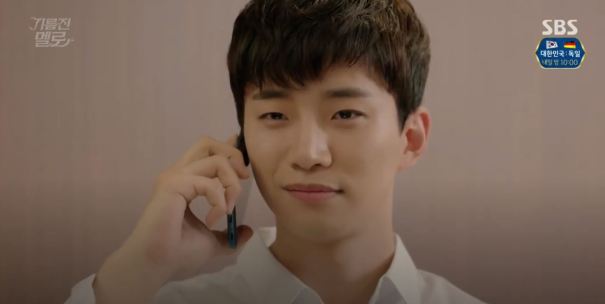 Sae Woo calls Seo Poong while she walks home to test if he’ll answer as he promised he would. Even though he’s brushing his teeth, Seo Poong promptly picks up. He tells Sae Woo he’s going to tell Chil Seong about them. Sae Woo agrees. They wish each other good night and hang up smiles on their faces.

Seo Poong calls Sae Woo to stop by early for a special treat. Remembering that Sae Woo loves almonds and tofu, Seo Poong makes almond tofu with spicy sauce. They feed each other and enjoy the delicious food. Sae Woo declares she’ll introduce him to her family soon.

Former traitors co-workers Bo Ra (now sorry for her actions) and Sam Sung discuss how CEO Yong will get the 100-person reservation switched back to the hotel leaving Seo Poong stuck with prepped ingredients with no customers. Sam Sung could care less countering that if they start losing business to Seo Poong, their livelihoods could be at risk. Bo Ra looks troubled.

Dong Sik notices Chil Seong waiting outside the eatery. He assumes Chil Seong is wondering if his mother will return, but she doesn’t show.

Seo Poong chastises in Jeong Hae (Lee Mi Sook) for poor knowledge for service. Sae Woo, Seol Ja and Im Geok Jung (Tae Hang Ho) watch uneasily. Seo Poong warns her she could be dismissed if she doesn’t get her act together.

Sae Woo, Jeong Hae, Seol Ja and Geok Jung return to the eatery. Sae Woo goes to the kitchen to talk to Seo Poong. As the other three glare at him, Sae Woo tries to stop Seo Poong from being flirty.

Later Jeong Hae asks Sae Woo if Seo Poong likes her. She denies it. Jeong Hae forbids Sae Woo from dating a divorced man like Seo Poong. There’s no way Sae Woo can sway her mother’s opinion. Seo Poong startles them when he finds them talking. When he takes the heavy cans from Sae Woo’s hands suspicions are raised.

Seo Poong snatches Sae Woo’s hand as the foursome cross the street. They scamper away undetected.

Chil Seong goes to his mother’s apartment. He spies the poster of his father the fighter on the wall. His mother (Lee Mi Sook) states even if he doesn’t want to call her mother, that man is his father.

Flashback…Chil Seong’s father wins a fight. Battered and bruised enters the locker room to find his wife and baby Chil Seong in her arms. She’s pleased he won and tells him to come home so she can tend him. He collapses and dies.

Chil Seong sits down and tells his mother it’s time she starts mothering him. He eats the offered ramen.

What I like about Chil Seong is his willingness to adapt. He didn’t turn away from his mother even though there is pain associated with her. Chil Seong does the same with Sae Woo.

Chief Wang is pleased with CEO Yong assures him that after his conversation with the hospital manager, the 100-person reservation will be switched back to the hotel. Chief Wang is all smiles when he enters the kitchen. Bo Ra asks what put him in a good mood.

Seo Poong tries to tell Chil Seong about dating Sae Woo but once again they are interrupted.

Seo Poong and the team prep for the 100-person reservation. The nurse calls and cancels the reservation. She explains the hospital manager decreed the hotel be the food provider. She apologizes stating there’s nothing she can do. Seo Poong graciously tells her maybe next time.

The team can’t believe the reservation was cancelled so close to service. Seo Poong walks away.

CEO Yong and Chief Wang thank the hospital manager and those under him for giving the hotel the opportunity to serve them. CEO Yong ignores the nurse’s disapproving look.

Meanwhile Chil Seong, Maeng Dal, and Dong Sik take the food to the striking construction workers that CEO Yong isn’t paying. They’ve rejected speaking to Chil Seong before. But the delicious food breaks the impasse. Chil Seong surprises them with the offer to pay the money CEO Yong owes in return for the lien (due bill) CEO Yong must pay.  Chil Seong states he is better suited to deal with the likes of CEO Yong.

Chief Wang is pleased when the hospital manager likes his food. The nurse isn’t as happy.

Having no customers, Seo Poong tells the team to go home early.

Sae Woo returns to the eatery to find Seo Poong sitting outside. She offers beer and concern over the day. Seo Poong says tomorrow reactions will occur from the day’s events. He admits he’s not thrilled about dating in secret. Sae Woo is adamant this is what they must do for now. Seo Poong acquiesces to Sae Woo’s demands and gently kisses her. Chil Seong watches them having walked back to the eatery.

Chef Seo Poong (Lee Joon Ho) balked at dating in secret but Sae Woo was firm. Sae Woo offered Seo Poong support the ruined reservation which he appreciated. Seo Poong was ready to tell Chil Seong he was dating Sae Woo. But it didn’t happen due to interruptions thwarting the 2 attempts to convey the news. He wanted to put his cards on the table and tell the world that Sae Woo was his girl. Little did Seo Poong know that he’d berated Sae Woo’s mother forcing Sae Woo to demand they date in secret. Seo Poong and Sae Woo are a couple with a gentle vibe.

Dan Sae Woo (Jung Ryeo Won) wanted Seo Poong to meet her family but his dressing down her mother put that on hold. Sae Woo’s mother’s antenna knew something was going on between her daughter and Seo Poong. Sae Woo was forced to deny the validity of her mother’s concerns. Sae Woo’s tactic is to wait until her mother cools down before admitting a relationship with Seo Poong. But doing this Sae Woo extends hiding who her family is from Seo Poong. When do secrets ever help a relationship?

Doo Chil Seong (Jang Hyuk) takes a licking and keeps on ticking. Writer Seo provided a scene where Chil Seong’s boxing father died after a match leaving a distraught wife and infant Chil Seong behind. The inference must be that Chil Seong’s mother couldn’t financially afford to raise Chil Seong and hence chose abandonment. I’d like more explanation than that. Dumping your kid in a Chinese eatery because you think the owner looks like a kind man is flimsy logic. Chil Seong proved again his kindness when he sought out his mother (who had ben avoided him as promised) and stating it was time she mothers him. Chil Seong offers his mother the dream chance. Acceptance without recrimination. That doesn’t happen often in kdramas. Chil Seong has a good heart. Chil Seong decided to set up a battle directly with CEO Yong by convincing the striking construction workers that he’d reimbursement them for CEO Yong’s debt in return for the due bill. This gives Chil Seong the right to demand payment from CEO Yong from a stronger position than the construction workers. Will Chil Seong parlay the opportunity to get more than the owed cash from CEO Yong? Finally, Chil Seong learned that Seo Poong and Sae Woo were involved. This moment had to happen. It finally has. Chil Seong has handled almost every setback with dignity and resilience. Can he do it again?

I rank these episodes (on a scale from 1-10) as very good. My episode ranking chart is below.