Im Sang Mi (Seo Ye Ji) and her father talk in the worship room. A man whose mother was beaten during “fire prayer” and is in debt to loan sharks for the donations she’s given the cult, enters the church with two cans of gasoline. He spreads the gasoline over part of the room. Sang Mi’s father orders him to stop and gets thrown to the ground. Seok Dong Cheol (Woo Do Hwan) enters the room from a side door and pins the man. He shoos away Sang Mi and her father. He knows the man who can’t believe Dong Cheol is a member of the cult. Dong Cheol assures the man he’ll bring the cult down brick by brick very soon. He orders the man to hit him as members rush in. The man runs and the members give chase. Cult leader Father Baek Jung Ki (Cho Seong Ha)and deacon Jo Wan Tae declare Dong Cheol a hero.

Dong Cheol overhears Wan Tae give a physical and verbal reminder to faithful leader Kang Eun Sil that she owes him for cleaning up the mess when she killed her abusive husband by injection. He orders her to increase the member donations so he can line his pockets with cash. 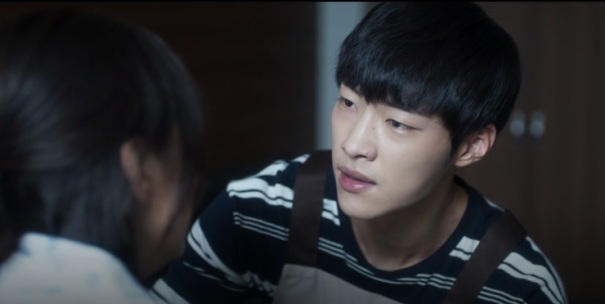 Dong Cheol tells Sang Mi’s mother to lay low and continue to pretend she’s under the influence of the drugs Eun Sil has been giving her to keep her docile.

Dong Cheol searches the doctor’s office and finds a patient file on Sang Mi diagnosing her with depression including a prescription for drugs. He shows his findings to the undercover reporter and Sang Mi. They deduce the nursing home has all followers as patients to increase their government subsidies and allotment of prescription drugs. The undercover reporter declares she can take this to her boss as sufficient evidence to begin an investigation into the cult.

Sang Mi puts an a performance for Father Baek, her father, her mother, and the faithful followers to show that she’s one of the body and ready to assume the role as Mother of Spirits.

Sang Hwan and Man Hee appropriate a friend’s car and head to the cult to retrieve their friend.

Dong Cheol interrupts the process when he reports seeing young men heading to the outbuildings. Sang Mi’s father, Wan Tae and a gaggle of followers run into the woods to capture them. Meanwhile, Sang Hwan and Man Hee have found the beaten Woo Jung Hoon (David Lee) and free him. The followers pursue them to the care. Dong Cheol “tries” to stop them. He orders Sang Hwan to hit him so he can let them escape. Sang Hwan hits him twice and they manage to escape with Jung Hoon much to the chagrin of Wan Tae and the others.

Jung Hoon thanks Sang Hwan and Man Hee for saving him. He declares the cult will destroy their town if left alone.

Wan Tae tells Father Baek that the cult is undergoing too much scrutiny. He declares they need to close up shop and move to another town. But Father Baek won’t stop until he possesses Sang Mi. He tells Wan Tae if he can’t take the heat, he should leave the cult. Wan Tae doesn’t like that, not one bit. He reminds Father Baek that he shouldn’t believe his own hype and that he’s a common criminal who he protected in prison. He almost hits Father Baek who dares him to do it. Instead Wan Tae stalks away.

Sang Mi tells her father she had a dream from god that she needs to pray for her mother in person.

Sang Hwan and Man Hee tells the police detective about Jung Hoon’s treatment. Sang Hwan pressures him to finally bring charges against the cult. The police detective decides he needs to kick the dust of this small town off himself and return to Seoul a hero for exposing the cult. He warns Sang Hwan that his father the Governor will try and suppress any actions against the cult. Sang Hwan texts Dong Cheol that they will take Jung Hoon to the hospital tonight and press charges with the police tomorrow.

Sang Hwan visits his mother and tells her he will take action against his father. Sang Hwan’s mother moves her hand but he doesn’t see it.

Sang Mi and her father visit her mother. Sang Mi gets a moment alone with her mother and tells her it’s almost over.

The undercover reporter is tied up in the basement. This isn’t her day.

Jung Hoon recalls his father taking money from Wan Tae. He shakes his head that his father’s silence was purchased. He loves his flawed father anyway.

Eun Sil prepare to inject the undercover reporter with a knock out shot. Dong Cheol stops her and in the struggle Eun Sil is injected.

Sang Hwan gets the shock of his life when his mother calls him.

The cult feels the pressure now. While I despise the evil Wan Tae, he’s right that the cult should shut down. But Father Baek believes his own lies, and sees himself as god’s right hand man. More importantly, he won’t leave Sang Mi when he’s so close to marrying her. Eun Sil also believes the hype but Wan Tae choked her into remembering that he’s in this for the money and she better deliver. Finally as suspected the undercover reporter wasn’t able to escape the clutches of the cult. Wan Tae had to do his own dirty work and dispense with her. Everything is coming to a head…only 2 episodes to go.

Sang Mi was forced to beat the undercover reporter. She had plenty of practice watching her father beat/pray over followers. This must have been a dreadful moment for Sang Mi, yet she had no options. She couldn’t let the drugged reporter say anything about her mother and everyone was waiting for her beat/pray the reporter.

Sang Hwan and Man Hee saved Jung Hoon. It took Sang Hwan a minute to realize that Dong Cheol wasn’t trying to turn them in but rather prove his loyalty to the cult. Sang Hwan got in two good punches and drove away to safety. I’ve enjoyed the comradely between Dong Cheol and Sang Hwan these last episodes. Thank goodness for cell phones, how would they communicate without them?

When Dong Cheol slipped his glasses off he transformed himself from Clark Kent to Superman. As a Dong Cheol fan, this episode showcased his efforts to juggle and kept the efforts to nail the cult going forward while luring the cult leaders to trust him more and more.

Ranking the episodes (on a scale from 1-10) had me rank the episode 13 as terrific. My episode ranking chart is below.

The fifth song of the OST “Endless Tears” by Hwayobi is released and continues the creepy overtones of this OST:

Tagged with: episode 14, Ok Taecyeon, Save Me
Posted in Recaps, Save Me