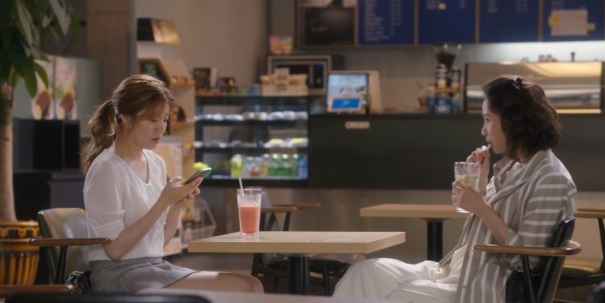 Bong Hee’s mother tells Eun Bong Hee (Nam Ji Hyun) she’s trying her best to forge a relationship with Ji Wook’s mother but it isn’t easy.  Bong Hee’s mother assures Bong Hee she’ll manage, after all she needs to get along with her future mother-in-law. Bong Hee starts to tell her mother that she and Ji Wook have broken up but she’s spared when she gets a phone call from the police.

I guess the hospital stint is over. That was a bit jarring considering the last episode ended in the hospital.

When Bong Hee arrives at the police station a Harry Potter look alike child declares Bong Hee is his lawyer. He has witnessed a murder but claims he can’t remember the assailant’s face.

Bong Hee brings the child to work. Recall she’s not been at work since she and Ji Wook broke up. Lawyer Ji Eun Hyuk (Choi Tae Joon), Assistant Jang (Jang Hyuk Jin) and Lawyer Byeon Young Hee (Lee Deok Hwa) are thrilled to see. No Ji Wook (Ji Chang Wook) enters and stares at her with hunger. When they notice the child, they are confused and jarred when the child calls Bong Hee mother. The child, Kim Jae Hong, explains his father is dead and he lives with an Aunt and Uncle that aren’t nice. He says he’s just like Harry Potter. Jae Hong declares Bong Hee is his lawyer. That surprises everyone.

In the conference room, Jae Hong explains how he was hidden from view when a man came into the convivence store and stabbed the clerk. Ji Wook stares at the nervous boy.

In the kitchen Bong Hee finds Ji Wook and asks if there are any snacks for Jae Hong. Ji Wook flashes a ghost of a smile remembering Bong Hee’s penchant for snacks. Bong Hee remarks that it has been a while. They inquire about each other’s health. Ji Wook gives Bong Hee a snack. She’s unnerved by his nearness.

In the conference room, Assistant Jang learns Jae Hong’s Aunt isn’t interested. They need to find someone to watch the boy. No one can do it, except Ji Wook. He’s uncomfortable with Jae Hong staying with him.

When Lawyer Ji drives Bong Hee home, he asks about her health. She’s surprised to learn he visited her in the hospital. She further surprised to learn Ji Wook visited her too. She recalls a dream but wonders if it was real. Flashback to Bong Hee kissing Ji Wook in the hospital. Bong Hee realizes her dream was real. Bong Hee realizes she sounded like an idiot when she told Ji Wook that it had been awhile.

Jae Hong wakes from a bad dream about the killer.  He hugs Bong Hee’s bunny. He goes upstairs and finds Ji Wook who snaps at him to go back to bed. Jae Hong looks at him with imploring eyes and Ji Wook lets him sleep in his bed. Jae Hong worries that if he doesn’t testify the culprit will go free and the unsolved crime will be his responsibility. That triggers a memory for Ji Wook. He remembers Prosecutor Jang telling him if they didn’t catch the culprit, it would be his responsibility. Ji Wook remembers Prosecutor Jang pressing him to share what he saw. Ji Wook comes back to the present and tells Jae Hong that he doesn’t have to testify and this is not his responsibility.

Things are awkward when Ji Wook shows up for Jae Hong. Bong Hee and Ji Wook can’t stop staring at each other.

Jae Hong laughs when he asks Ji Wook if he and Bong Hee are an item.

Later Jae Hong wakes from another bad dream. Ji Wook soothes him. Jae Hong frets that the killer will find and kill him too. Ji Wook assures him that won’t happen. Jae Hong is troubled that he doesn’t know how the culprit is. Ji Wook tells him it would be best if they can solve the case now, so he can stop being worried. He doesn’t want Jae Hong to have nightmares into adulthood.

As Ji Wook walks away he remembers Prosecutor Jang giving him the picture of Bong Hee’s father and declaring he was the culprit. Ji Wook shakes his head trying to clear his mind. He once again remembers declaring he didn’t know who the culprit was.

Bong Hee visits Hyun Soo in the hospital. She stares at the sleeping man. When Assistant Jang calls she reports there is no change with Hyun Soo. Holy smokes! Bong Hee is startled when she turns and finds Hyun Soo standing in front of her! They stare at each other. That startled me!

Jae Hong was inserted to jog Ji Wook’s memory. I don’t mind the character and the young actor did a fine job. But this seemed forced. Jae Hong choosing Bong Hee as his lawyer. Ji Wook having to take care of Jae Hong. The actors interacted well, that’s not the issue. It felt like Writer Kwon had notes for this episode said “parallel Ji Wook’s blocked memories in a present-day child”.

Eun Bong Hee (Nam Ji Hyun) was surprised to realize she really did kiss Ji Wook in the hospital. There was decent longing between our twosome. Especially when Ji Wook got close to Bong Hee. She couldn’t hide her sensitivity to his nearness. I was startled when Hyun Soo appeared in front of Bong Hee. That moment had a horror-movie vibe.

No Ji Wook (Ji Chang Wook) was flooded with conflicting memories. He didn’t remember the culprit, then he did remember the culprit. His flashback to Prosecutor Jang coaching him that Bong Hee’s father was the culprit completely unsettled Ji Wook. And it should. Who is District Attorney Jang protecting?