No Ji Wook (Ji Chang Wook) and Eun Bong Hee (Nam Ji Hyun) learn the weapon that an ex-boyfriend used to threaten Yeon Woo (Bong Hee’s friend) cannot be found. The police state without a weapon they will be forced to release the ex-boyfriend in custody. Ji Wook and Bong Hee decide to look for the knife together. They don’t find it.

When they return to the office they find Lawyer Ji Eun Hyuk (Choi Tae Joon) and Assistant Jang (Jang Hyuk Jin) who let them know they stink! Bong Hee reports they couldn’t find the knife. She admits she’s worried what will happen once the ex-boyfriend is released. Ji Wook flashes back to So Jung Ha’s prediction that he will cry over someone. He tells himself it won’t be Bong Hee he cries over.

Hyun Soo tells himself he needs an alibi as he holds a knife and stares at everyone that works with Ji Wook. He mutters the order must be decided too. Yikes!

After cleaning up, Ji Wook is irked that Assistant Jang and Lawyer Ji are still there. He tells them if they must work, do it at home. He snaps this is day one (of dating Bong Hee). Unaware, Assistant Jang counters it is the middle of the month. Lawyer Ji understands. Ji Wook distracts him by telling him to the find witness to the assault. Lawyer Ji explains how he’ll use social media. Ji Wook and Bong Hee are old school and don’t understand the methodology. Ha!

Per their nighttime ritual Ji Wook makes tea. Bong Hee thanks him for helping her search for the knife. She surprises him with a quick kiss. He loves it! When he goes in for a big hug, she steps aside saying the kiss was enough for day one.

Cute! I loved the way Ji Wook decisively dropped that spoon before attempting to hug her.

Inside her room, Bong Hee sobers and tell herself to find the weapon or witness tomorrow or the ex-boyfriend will be released.

Lawyer Ji tutors Ji Wook and Bong Hee how to upload pictures to social media. They coo over each other’s pictures and like them. Poor Lawyer Ji’s picture has no one to fawn over it.

Na Ji Hae (Kim Ye Won) and Bong Hee face-off. Bong Hee wants Ji Hae to help raise the public’s awareness of breakup crimes. Ji Hae points out she only gets involved after the crime has occurred not before it. Bong Hee sees that Ji Hae doesn’t have the vision to help and tells her to forget it as she strides away.

Lawyer Ji tells himself he only has 2 hours to find the witness or the ex-boyfriend will be released.

They are all smiles as they drive to meet Yeon Woo.

The detective calls Lawyer Ji stating he must release the ex-boyfriend. Lawyer Ji implores him for a bit more time as he eyes the girl he thinks witnessed the assault. When he approaches her, she’s surprised.

The ex-boyfriend asks a lawyer dropping off his client if he’ll go to prison. The lawyer asks the police why the man is still in custody after the 48-hour period.

The witness tells Lawyer Ji she can’t testify because her mother when find out she was skipping school. Lawyer Ji sweetly but firmly tells the girl he’ll tell her mother if she doesn’t do the right thing and testify. The girl agrees. She asks if the knife wound healed on the victim. Excited Lawyer Ji confirms she saw the ex-boyfriend brandish a knife.

The ex-boyfriend exits the police station. He reveals the knife was stashed in his wrapped arm! That surprised me.

When Lawyer Ji calls the police about the knife, he learns the ex-boyfriend has been released.

Did anyone else want the smack Yeon Woo for interfering?

Lawyer Ji calls Ji Wook informing him the ex-boyfriend’s knife was in his cast AND he’s been released. 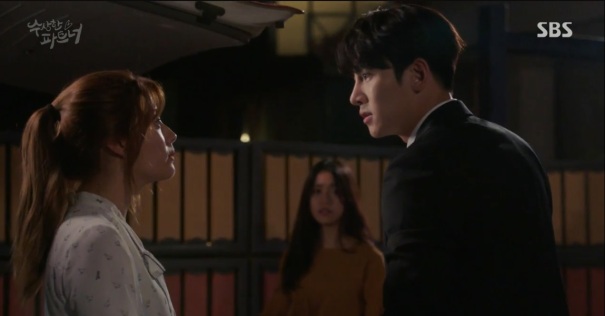 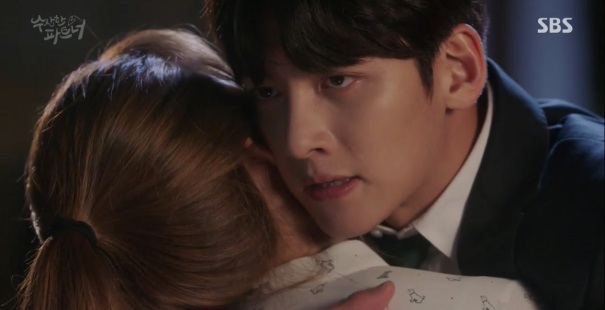 That touched Ji Wook’s fear of loss big time. I liked that he didn’t hide his fear and relief and wasn’t shy about demonstrating that through his deep hugs.

Ji Wook runs into the apartment and finds Assistant Jang bleeding on the floor. Ji Wook implores him to wake up it’s too late, he’s dead. Ji Wook screams no and implores his friend to wakes as he sobs. Awk! Tears!

Bummer, I really liked Assistant Jang. Ji Wook’s nightmare came true when he found Assistant Jang’s body. That fight was physical. Assistant Jang defended himself well but Hyun Soo overtook him. I’m ready for details WHY Hyun Soo is doing what he’s doing. Writer Kwon has kept us in the dark long enough.

Eun Bong Hee (Nam Ji Hyun) had the ex-boyfriend well in hand until her friend interfered. Her marital arts skills were put to good use.

No Ji Wook (Ji Chang Wook) dealt with fear of loss and actual loss. When his parents died and left him behind that scarred him. Abandonment and loss are issues for Ji Wook. He was terrified that he’d lose Bong Hee when he heard the ex-boyfriend was released. His relief was tangible. But when he found Assistant Jang’s dead body the nightmare became reality. Ji Chang Wook let it go and delivered shock and grief, real and raw.