My Thoughts — My Secret Romance — Episode 9

At the end of my recaps I have a “My Thoughts” section where I summarize my opinions. I just finished episode 9 of My Secret Romance.  This show continues to be my guilty pleasure.

* The question of Dong Goo’s father loomed. I loved that Jin Wook was willing to try and be a parent for Yoo Mi. She was nonplussed when Dong Goo joined their date making her a third wheel. That clarifies that Dong Goo is NOT our OTP’s love child. But Jin Wook’s father believes it and Jin Wook thinks it’s probably true. How long until this misunderstanding is resolved? 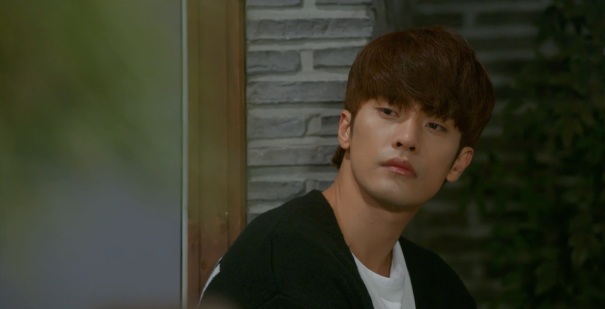 * Cha Jin Wook (Sung Hoon) is thoughtful and open with his feelings. He is a leading man that draws you to him with a wonderful mix of caring and willingness to say what he thinks. This kdrama’s leading man is scoring with me. I’m not sure I can effectively convey my pleasure that Jin Wook is a different version of the cookie-cutter leading man. Writer Kim has embodied Jin Wook with variations that resonate. He was forthright that he was devastated after she disappeared after their initial encounter. In turn, she admitted she hadn’t forgotten him either. Watching him care for his cat and kitten was lovely. Knowing that the blanket he lined the box with was a precious memory of his mother made it almost poignant. Watching him enjoy (not endure) time with Dong Goo was a pleasure. When he told his Assistant Jang he was be willing to give parenting a try for Yoo Min, he had my heart. Sung Hoon’s portrayal Jin Wook is playful and earnest. I like his hair styled swept back or on the forehead. And you can’t help but notice, Sung Hoon has a rocking body.

* Lee Yoo Mi (Song Ji Eun) doesn’t understand why Jin Wook is including Dong Goo on their dates. She isn’t the brightest bulb in the bunch or she’d have an inkling why Dong Goo was there.  Even so, she’s willing to make a go of it with Jin Wook. She’s more understated about her feelings. But she got a sweet office courtesy of Jin Wook!

* The production continues to embraces fun.  I love the way this show does the texting between our couple. Adding a popup video of the character saying the text and seeing the text, makes their exchange all the more fun because you see their faces and hear the inflections.

* Writer Kim gave our couple plenty of screen time. This Writer Kim’s first kdrama (per Asianwiki). I like the charm that our couple has. Their innate sweetness and kindness toward each other comes from Writer Kim.

** Jang Woo Jin (Park Shin Woon) was miffed to learn that the child might be Jin Wook’s. He was unhappy because Jin Wook didn’t tell him immediately. He doesn’t like being the last to know.
** Jung Hyun Tae (Kim Jae Young) stopped Jin Wook’s wanna be girlfriend Joo Hye Ri from interrupting our couple. He is being a supportive friend. He deserves better than Hye Ri who went down in my estimation this episode.
** Wanna be girlfriend Joo Hye Ri came across as a typical jealous second lead willing to cause trouble for our couple. Joo Hye Ri does not know the real Jin Wook, she only loves the idea she has of who he is. She’s self centered. What about this character has any merit?
* Ranking the episodes (on a scale from 1-6) had me rank episode 9 as good.  My episode ranking chart is below.