Eun Bong Hee (Nam Ji Hyun) smiles while she walks and thinks “I was hurt by a man and didn’t think I could trust a man again. But I ended up liking and trusting another man.” She’s just survived being falsely accused of murder, and one man saved her. She watches that man, No Ji Wook (Ji Chang Wook), walk out with his belonging in a box. Bong Hee is ready to confess her love. She knows they are supposed to be together today and tomorrow. They walk to each other. Ji Wook says they were brought together by fate. She smiles. Ji Wook amends his statement. They have an ill-fated relationship. The smile fades from her face. Ji Wook says they shouldn’t see each other again. He walks away. That deflates Bong Hee. But she has to try. 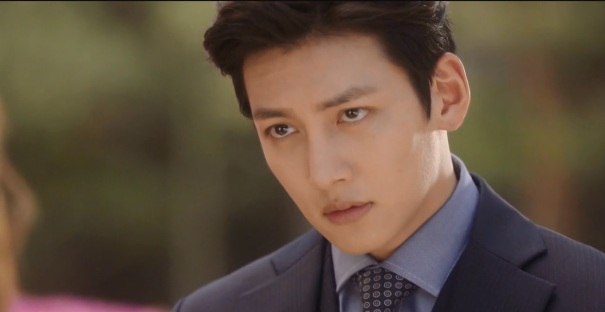 She runs to Ji Wook. She holds out a gift, one that cures insomnia she claims. Ji Wook wonders who she knows he suffers from insomnia. She worked for him for 2 months, of course she knows. She declares he looks good for someone with insomnia. Ha! Ji Wook enjoys her chatter but warns her this is her last chance to speak with me. With an earnest heart, Bong Hee declares she is sorry for wrongly accusing him of harassing her on the subway. She’s sorry he lost his job ensuring justice was served to her. Bong Hee declares that he’s her hero just like Iron Man. That earns a smile from Ji Wook. But she hesitates to share her love. Ji Wook knows there’s more she wants to say and prompts her.

Instead she tells him she recently saw the murderer. That gets Ji Wook’s attention. She should have told him. Bong Hee explains she heard the murderer whistling when he road past her on his bicycle the night of the murder. Ji Wook urges her to describe the whistling song. She attempts to hum it. He attempts to follow along.

At home, Ji Wook, relaxes to jazz and a book. But he can’t Bong Hee’s whistling song and her willingness to cut him out of dealing with the murderer at large.

Ji Chang Wook looks yummy in that sweater. His skin glows with health.

Bong Hee hears the whistling song again. She imagines the man on the bike chasing her. She dashes into her apartment. Then she wakes from the dream.

Bong Hee states the evidence was fabricated. She points out she doesn’t have to prove she’s innocent. She vows to do so anyhow for herself, Bong Hee, her mother, and SB. That raises District Attorney Ji’s hand and his ire. He declares her ability to bewitch men, his son and Ji Wook are cited, is now established. He promises to make her regret being free. He vows to harass and punish her.

Yikes, he is the poster child for anger and grief stops the logical mind from working. Bong Hee held up as well as anyone could under that virulent stream of hate.

Ji Wook visits his father’ memorial and apologizes for not being the prosecutor he promised his father he’d be. 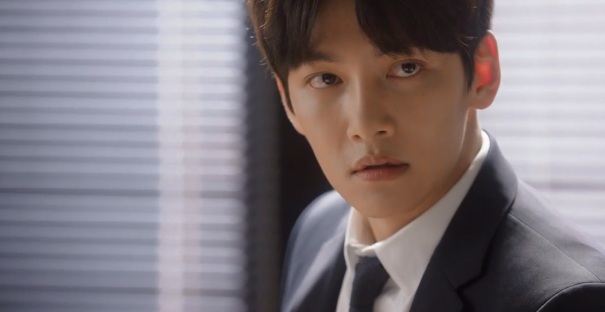 Ji Wook arrives at his new office and Lawyer Ji Eun Hyuk (Choi Tae Joon) is there to greet him like a puppy thrilled his playmate has come. Ji Wook tells Lawyer Ji not to get any ideas that they can be friends. But he’s curious Lawyer Ji’s thoughts about him contacting Bong Hee on a matter would give her false hope, since he banished her from his life. Lawyer Ji concurs it would but she’d love the surprise. Ji Wook tells Lawyer Ji to get lost. Lawyer Ji points out they share an office. Ha!

I knew this hairstyle was coming and I don’t like it. The down the middle part on bangs, does not look good.

Bong Hee listens to songs in the hope of identifying the whistling son. Bong Hee puts up a billboard telling the murderer to contact her. She arrives at the area where the murderer left the knife. She sees a man walking towards her and assumes it’s the murderer. She puts up her fists relived when the backlight man turns out to Ji Wook. They snipe at each other.

She asks if he’s worrying about her. She stumbles and he grabs her hand to steady her. The connection is there and he drops her hand like a hot potato. He strides away and she follows. He admits having his last case unsolved bothers him. When Bong Hee explains that she’s never actually saw the murderer’s face, Ji Wook isn’t impressed. He presses for details on the bicycle the murderer rode. Bong Hee has none. Ji Wook can’t believe it. Bong Hee has almost nothing to go on to find the murderer. He laughs the laugh of a man without hope.

He can’t believe he was worried and broke his promise not to see her to find out what she knew. Bong Hee reminds him she’s capable of taking care of herself. Ji Wook yells that the opposite is true. Bong Hee retorts she might think he’s worried about her based on his level of agitation. Ji Wook admits to be worried but is clear it’s not personal. He wishes her well. He leaves. She yells she’ll find a real lead, she’ll solve the mystery, and make him proud. She whispers he’ll change his mind that they have an ill-fated relationship.

Time passes…she spots Ji Wook every once in a while…she watches him never approaching, never acknowledging.

The murderer has the banner taken down. He logs Bong Hee’s cell phone number in his. 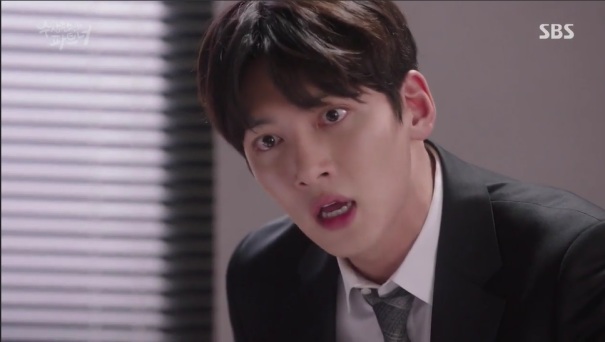 Nice diatribe! That was a ton of dialog and Ji Chang Wook delivered it with zip and passion! 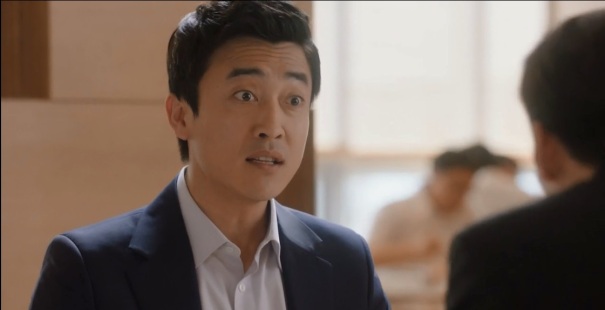 Ji Wook passes by his old office and longs for the day his name was on the nameplate. He opens the door a peak and asks his former assistant to eat lunch. As they eat, Assistant Bang says he heard about Ji Wook drunken comments with his co-workers about lawyers selling their soul to the devil. To which, Lawyer Byeon tells his team, they are all lawyers. He chastises Ji Wook for his words. Assistant Bang remarks that Ji Wook insults everyone. He urges Ji Wook to let it go and go with the glow of his new work. Ji Wook yells that he can’t take defending criminals he wants to put away. Lawyer Ji joins them and agrees that Ji Wook is find the switch to the other team difficult. Ji Wook leaves. Assistant Bang watches him concerned. Lawyer Ji remarks that Ji Wook runs his hand against walls for contact with something solid in his life.

In court, Ji Wook is giving her argument as the lawyer for a defendant when Ji Wook walks in. She loses her train of thought.

This show is light but has serious overtones too. The episodes don’t seem substantial but they do zip along. I like but don’t love this show. I’m just not hooked…yet. Why are 1 hour episodes divided into 2? Once again, I find it a bit odd to classify this as a romantic comedy. She likes him. He declares they can’t see each other. But he worries about her. Time passes. He’s a lawyer and unhappy. She a lawyer too. Is she happy? How will they reengage?

What’s with the murderer? He’s left her alone for all this time. Is he just tracking her? There’s no need to reopen this. He got away with murder.

No Ji Wook (Ji Chang Wook) hates working the other side of the courtroom as a lawyer. The importance of his career is based in his vow to his honorable father become a prosecutor too. This new career doesn’t bring him happiness. He’s trapped in a career he hates. I liked that he reached out to his former assistant. I like that Assistant Bang. We are no closer to knowing why Ji Wook doesn’t trust Lawyer Ji. We only know our leading man isn’t happy. We want him happy. By the end of the episode I could handle the new hairstyle as it has a messy look to it, not slick and straight.

The second song of the OST “How Do I Say It?” by O.When is pretty.