If I’ve got only a moment there are certain scenes I watch for a quick hit of kdrama goodness.

Today’s Favorite Scene is Eop Bok’s final stand from the stellar historical drama Chuno (Slave Hunters) episode 24. While Chuno’s primary story was driven by the compelling Jang Hyuk as Dae Gil, the slaves had their own story. In that historical time, slaves were crucial to life but considered the lowest rung of society.

The setup – Slave marksman Eop Bok (Gong Hyung Jin) is going to take his revenge for the slaves being used and betrayed by evil incarnate Left State Minister Lee Gyeong Shik. He’s got a short list of who has to pay with their lives. One name is on the list…Left State Minister Lee Gyeong Shik. Bold as brass, Eop Bok is a one man multi rifle assault unit on the palace.

Eop Bok takes out the palace guards that block his entrance. He avoid the arrows as he enters the palace. 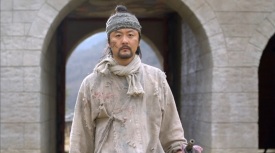 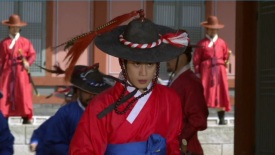 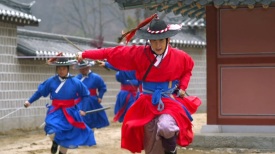 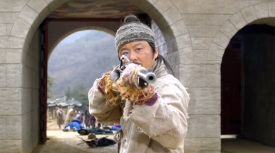 Running into the courtyard is the former leader and betrayer of the slaves Geu Boon (in the red robe). Geu Boon’s sword is ready to mow down Eop Bok, whose gun is revving up to kill Left State Minister Lee Gyeong Shik. Eop Bok turns the gun and it goes off killing the betrayer Geu Boon. 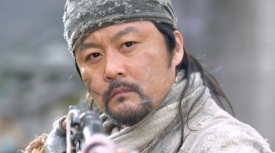 Now Eop Bok turns his full attention to Left State Minister Lee Gyeong Shik. He calmly loads his gun, takes aim, and kills the most evil character of this series. Let me tell you this was satisfying!

Eop Bok is captured. He is forced to the ground. Watching is Eop Bok’s slave friend who clenches his fists in rage. You know the slave revolt isn’t dead at all…it’s only beginning.

This compilation video offers the stellar Eop Bok moments in Chuno set to the namesake song by MC Sniper. While the entire video is worth watching, it is cued to the favorite scene, check it out via this link or the embedded video below.