Review. The Thieves is about a two teams of thieves work together to execute a huge heist.
Synopsis. What if years ago you were betrayed during a heist? Would you work together again for a big money job? The three leads grapple with this in The Thieves.
More Details. The Thieves is a 2012 Korean film that stars Kim Yun Seok as thieves leader Macao Park, Kim Hye Soo as safe cracker Pepsee, and Lee Jung Jae as Korean thieves leader Popie. Macao Park, Pepsee, and Popie are the thieves trio from the betrayal heist. Now Macao Park brings two teams of thieves together for a complicated hiest in Macau. The Korean team consists of Popie (leader), Pepsee (safe cracker), Yenicall (Gianna Jun) (wire specialist), Chewingum (Kim Hae Sook) (thief), and Zampano (Kim Soo Hyun) (wire operator). The Chinese team consists of Chen (Simon Yam) (leader), Andrew (Oh Dal Su), Julie (Angelica Lee) (safe cracker), and Johnny (Kwok Cheung Tsang) (weapons). Can they work together? Can they accomplish this heist? Can they trust each other?

What I liked about The Thieves:

Strong Story. I’m a fan of heist films when they are well written with plenty of twists. The Thieves is the poster child for this criteria. The story had depth and nuance. The writers who crafted this tight story were Choi Dong Hoon (who was also the director) and Lee Gi Cheol. Could the Korean team trust each other? Could the Korean and Chinese team work together? When old grievances between the betrayal heist trio surfaced, could they be overcome? Could they accomplish the heist and get away without being caught? I liked that the ratio of men to women characters (6 to 4). The women characters were crucial parts of the team and respected for their abilities by the men. 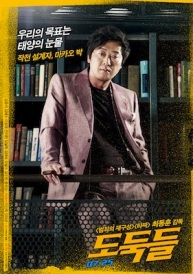 Kim Yun Seok as thieves leader Macao Park. He conceived of the heist, brought the two teams together, and organized the operation. But his residual romantic feelings for Pepsee and his anger towards Popie were obvious issues from their betrayal heist. Yun Seok portrayal was a cool under fire man that could not trust his former thieves trio members but wanted to believe there might be another chance with Pepsee.

Kim Hye Soo as safe cracker Pepsee. She went to prison for the betrayal heist. This Macau heist is her first since being released from prison. Does she still have the skills to crack the safe? Does she still have feelings for Macao Park? I especially liked Hye Soo’s interactions with the other female characters. There was snark and respect for each other’s skills. 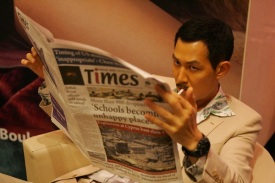 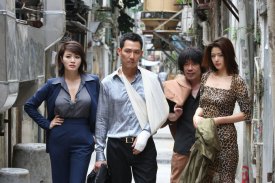 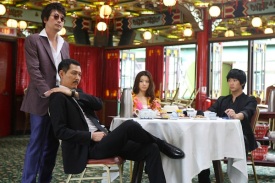 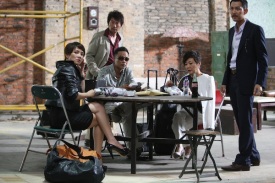 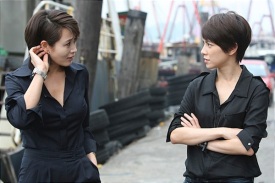 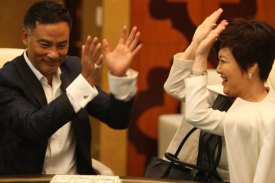 The rest of the thieves contributed. I grew to like each thief in this movie.
* Gianna Jun as Yenicall, wire specialist. She was young, pretty, and willing to use that. But she was more – hard hearted, smart, sassy, etc.
* Kim Hae Sook as Chewingum, experienced thief. She was a bit battle weary but she went all in on this heist, hoping it would set her up so she could retire. Her chemistry with Chen was good.
* Kim Soo Hyun as Zampano the wire operator. He was cute and interested in Yenicall. I’ve got a soft spot for Soo Hyun who I consistently enjoy. When his character had to create a diversion for Yenicall, that went to an unexpected place.
* Simon Yam as Chen Chinese thieves leader. His chemistry with Chewingum was good.
* Oh Dal Su as Andrew. He was sexist and my least favorite but even he grew on me.
* Angelica Lee as Julie the safe cracker. Cool as a cumber with safe cracking skills as good as Pepsee. I liked this character.
* Kwok Cheung Tsang as Johnny the weapons expert. He didn’t really matter in this film. 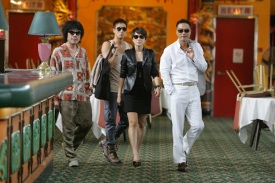 Not Much. This was a well produced, acted, written movie. I do have to quibble about the final chase. That much gun fire without hitting their target was ridiculous. There was limited emotion, this film was about the heist.

Final Thoughts:
The Thieves delivers on all counts – story, acting, production. This was a winner.