Team Good has a good day. Team Evil tries to slither away.

Remember (aka Remember: War of the Son) Episode 19 Recap

Gyoo Man stomps on the computer on the floor. Jin Woo walks in the office with a big smile. Jin Woo asks if Gyoo Man got his video gift. Gyoo Man tells him he will die for that. Jin Woo smiles that Gyoo Man enjoyed the video as he intended. Gyoo Man stamps on his computer and looks at Jin Woo with hatred. He demands to know why Jin Woo released a video that has no impact on the trial. Jin Woo says the court of public opinion is important too. Gyoo Man says the law is his toy. Jin Woo counters that Gyoo Man is not above the law. Gyoo Man tells Jin Woo with or without his memory, he is nothing. Jin Woo counters that with or without his memory, he’ll never forget what happened to his father. Jin Woo tells Gyoo Man he’ll see him in court. Gyoo Man has a hissy fit.

Gyoo Man’s father tells Prosecutor Tak he may have deceived him but this won’t break him. Il A says this will expose his tactics to use money to circumvent the law. Il A tells them it is over. Gyoo Man’s father and Il A do the glare and stare. 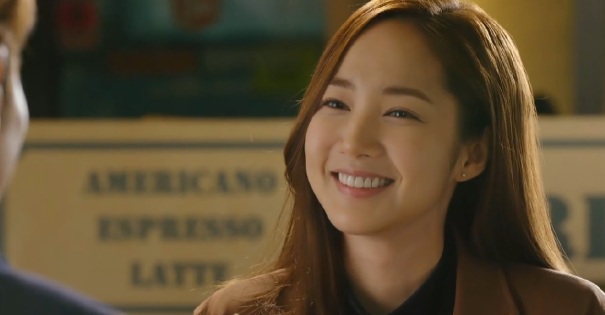 Il A is thrilled to become a prosecutor again. What’s the best way to celebrate? Have a sweet drink with the man you love…at McDonald’s! Il A gets cream on her face and Jin Woo wipes it off. Classic! Jin Woo encourages Il A to spread her wings and fly.

Gyoo Man overhears folks talking about the President being a murderer. Gyoo Man tells the employee he is a murderer so one more won’t hurt. He beats the employee in the open. Cell phones video tape the incident. What part of banning Gyoo Man from business was adhered to?

Il A speaks with the judge about the trial. She asks if the judge would persuade Gyoo Man’s assistant to testify. He promises to try. But he gets no answer. Why? The assistant is tied to a chair in a storage locker.

Gyoo Man’s father holds a press conference and apologizes for his son’s behavior. He asks for forgiveness and offers to take the blame. He promises to strip his son from all business power. Dong Ho smiles. Gyoo Man fumes.

Dong Ho (snappy in his red coat) compliments their crisis management press conference.  Dong Ho comments that father and son are a package deal. He promises they will be sent to prison by Jin Woo and him. Dong Ho tells the former prosecutor he’s merely the lap dog of Gyoo Man’s father.

Il A returns home to find her mother not happy that she’s returned to the prosecutor office. She grabs her mother’s arm. Mom refuses to let her get involved with the declining Jin Woo. Her father tells her to give her mother a break.

The former prosecutor notes the Gyoo Man’s sentence will likely be 20 years. He assures Father that he’ll get him out by special order after the public’s interest wanes. Gyoo Man enters not happy that Father stripped him from the business. Father states the business had to be protected. Gyoo Man says the trial’s outcome isn’t known. Father yells that the videos are damning. He’s looking at the worst case scenarios. Father says the separation from business was to appease the public.

The judge demands to know where Gyoo Man’s assistant is. Gyoo Man states the guy resigned and moved to the states. The judge doubts it. Gyoo Man smiles as the judge leaves.

The judge reports the to Il A that Gyoo Man told him his assistant left for the states. Neither of them believe it.

He goes to his super sleuth tracker and asks him to find the location of Gyoo Man’s assistant’s cell phone. 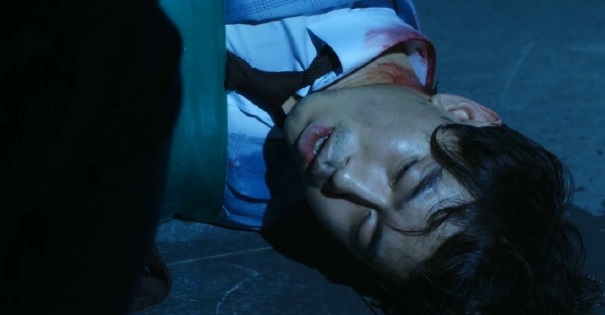 Gyoo Man visits his assistant and feigns concern. He begs for his life. Gyoo Man tells him to retrieve the evidence. He refuses. Gyoo Man says he’ll bring Jin Woo to him then.  Gyoo Man leaves with at least 20 men and who drives up on his white horse (okay white car). Dong Ho tells Gyoo Man to give him his assistant. Dong Ho happens to have some fighting skills and takes on Gyoo Man’s posse.  But there are two many men and Dong Ho is overwhelmed. Gyoo Man joins in the fun. Dong Ho tells Gyoo Man the law will win. Gyoo Man says he will win and grabs a pipe. Dong Ho’s assistant arrives with his posse. It is a posse to posse combat! Gyoo Man watches his men and yells that they suck. He leaves. 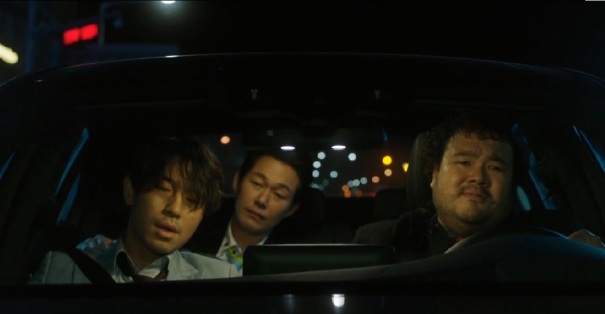 Gyoo Man’s assistant is grateful to Dong Ho and his assistant for being saved. Dong Ho quips the two assistants seem very close.

Gyoo Man hears it is game over if his assistant testifies. Gyoo Man asks the former prosecutor to help. He has an idea but he’ll be doing this rouge without approval from Gyoo Man’s father. Yeo Kyung overhears them talking. The former prosecutor states before Gyoo Man is killed in court, he must die.

Jin Woo visits the assistant and asks him to be a witness at the trial. The assistant can’t handle it. He knows that if you cross Gyoo Man, you die. As long as Gyoo man’s lives, he will not testify.

Gyoo Man recalls the former prosecutor recommending that he assume a new identify in China, then return to Korea later. He tells Gyoo Man that people forget quickly and his crimes will be forgotten. 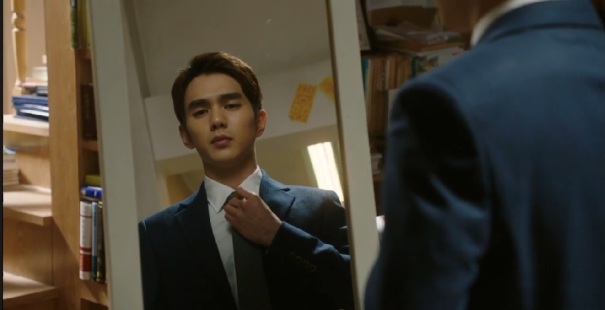 Jin Woo prepares for the retrial.  He remembers his father fretting about forgetting his son. He promises his father he’ll do well at the trial.

Outside the courtroom Il A and Jin Woo meet. He thanks her for her help. She hugs him. Dong Ho smiles when he sees them hugging. Il A says it is time for the world to hear the truth. Dong Ho wishes Jin Woo well.

Gyoo Man is livid that his assistant testified against him. He, with the former prosecutor’s help, decides to flee the country.

Jin Woo gives a heartfelt final argument. He asks the judge to clear his father’s name. 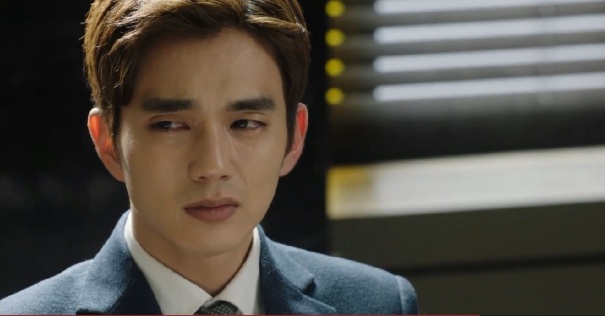 Later, the judge announces the verdict. Jin Woo’s father is acquitted. Nice touch when the judge expressed his regret that his father passed before the retrial. Jin Woo cries.  He looks to Dong Ho who offers a supportive stare. In the empty courtroom, Dong Ho congratulates Jin Woo for proving his father’s innocence. Dong Ho admits he feels better now that Jin Woo’s father has been acquitted. The two lawyers smile at each other.

Jin Woo returns to his father’s house. He retrieves the last letter his father wrote him. Jin Woo apologizes for taking too long to clear his father’s name. He cries in relief. 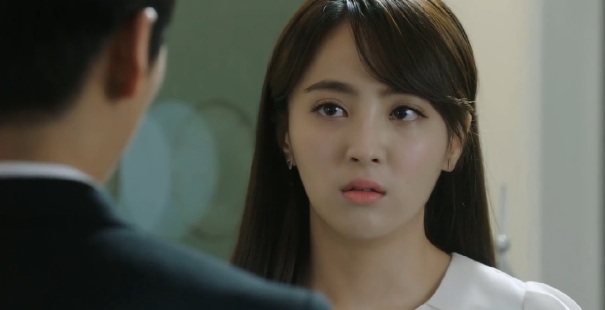 Yeo Kyung searches her brother’s room and finds a fake passport. Gyoo Man enters the room and asks what she’s doing. She demands to know what he’s planning. Gyoo Man states he won’t go to prison. He will save himself. He takes the fake passport. He tells her she’s knows nothing, she saw nothing. He leaves.

The police and Il A arrive at Gyoo Man’s office but he is not there. She call Jin Woo and tells him that Gyoo Man is missing.

The police arrive to search the house. Yeo Kyung asks where Il A is.

Il A and Jin Woo are in pursuit of Gyoo Man’s car. 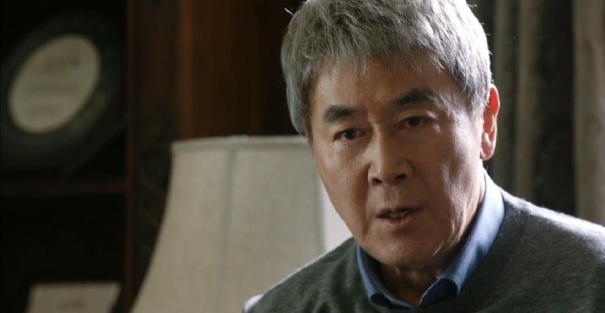 Il A arrives at the house. Yeo Kyung tells Il A that Gyoo Man is fleeing to China. That stuns Il A. Yeo Kyung apologizes for her family’s behavior. 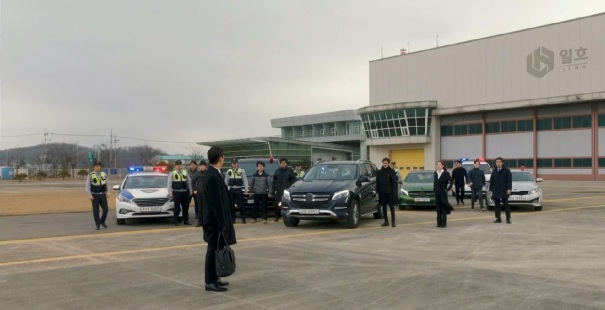 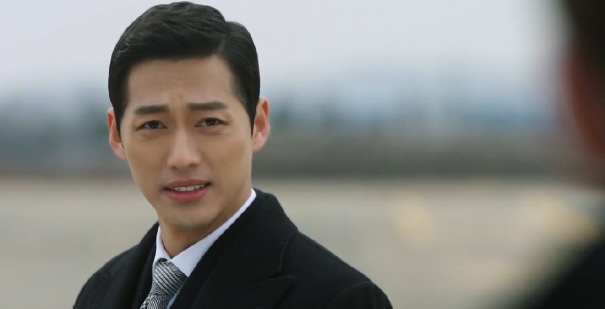 My Thoughts
* I love it when good wins over evil. Nice to see Jin Woo finally clear his father’s name. Nice to see Gyoo Man’s assistant testify against Gyoo Man. Nice to see Gyoo Man’s plan to leave the country thwarted. Yep, it was a good episode for Team Jin Woo.
* Jin Woo suffered no memory lapses and relished the moment of capture and relief at clearing his father name. I like how advance of the Alzheimer’s wasn’t a big factor this episode. It was nice to see Jin Woo have a solid episode where he was on it mentally and accomplished the acquittal.
* Il A is ready to prosecute Gyoo Man.  So glad that Gyoo Man did not escape so we can see Il A rip him in court.
* Dong Ho supported Jin Woo in court. Dong Ho was relieved when Jin Woo won the retrial. That is a burden off his shoulders.
* Gyoo Man’s anger when the helicopter flew away was great. Loved it. You can taste the courtroom for Gyoo Man. You can taste prison for Gyoo Man.
* Yeo Kyung finally put her ethics first. She told Il A her brother was fleeing the country. Atta girl!
* One more episode to go. My wish list:
* Il A rocks prosecuting Gyoo Man
* Gyoo Man goes to prison
* Gyoo Man’s father goes to prison
* I don’t think Jin Woo’s memory loss will be averted but I hope we don’t end the series with Il A tending Jin Woo who no longer knows who she is.