Our leading man prepares a trap for Gyoo Man who takes the bait and walks into the trap. Does Gyoo Man finally get caught?

Remember (aka Remember: War of the Son) Episode 14 Recap

Il A finds Jin Woo at his old house. He looks at her surprised to see her there. With tears in her eyes she asks why he is there. Jin Woo says his father isn’t home yet. He wonders where his father is. She hugs him. Jin Woo asks what is wrong not understanding why she is upset. She cries more realizing that Jin Woo suffers from memory lapses just like his father did.

Back at the office Il A asks the female assistant if Jin Woo has the same memory issues that his father did. The answer is yes. Il A wants to talk to Jin Woo’s doctor.

Jin Woo wakes in his room not knowing how he got there.  He remembers Gyoo Man telling him that Dong Ho’s father caused the accident that killed his mother and brother when he was a child.

The former prosecutor, now company attorney, reports he’s helping improve the image of the company. Gyoo Man and his father are pleased.

Il A and the assistant visit the doctor who explains that Jin Woo’s decline is rapid and could be complete in 6 months. Il A grapples with the doctor’s words – Jin Woo will be difficult to work with, deal with, and live with at the end. 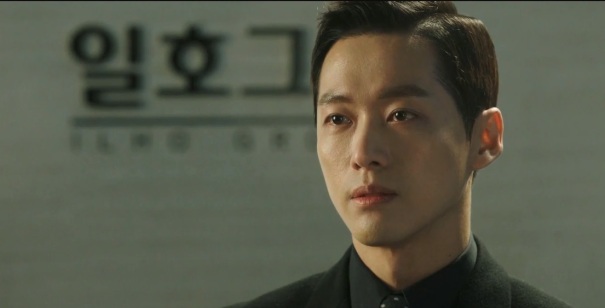 Dong Ho’s assistant tells him Gyoo Man spoke with Jin Woo last night. Livid he goes to Gyoo Man’s office and accuses him of digging around in his past. Gyoo Man counters he’s doing that same about his father. Gyoo Man doesn’t like the warning Dong Ho issues – leave me alone or else. Gyoo Man states Dong Ho can easily dealt with. Dong Ho warns that he can make a large splatter. Nice!

Il A tells her father about Jin Woo and asks what to do. Treat him the same is his father’s advice and remember the illness is part of him.

Back at the office Il A resists the assistants request that she not tell Jin Woo she knows about his mental decline. When Jin Woo arrives she plays the part of ignorant coworker. Alone Jin Woo remembers the dinner invitation and wonders what happened. Jin Woo tells his assistant that he remembers meeting Gyoo Man last night but what happened after was a blur. She asks if his illenss is increasing.

The judge investigates the forensics of the old case (where Gyoo Man is the murderer).

The former prosecutor visits Joo Il in prison. The attorney tells Joo Il that he will likely serve time in prison. That doesn’t make him happy.

Gyoo Man wonders if the judge is investigating him as the former prosecutor told him. When a bottle of wine is opened the judge wonders if someone could be killed with a wine opener. Gyoo Man asks if a friend committed a crime would the judge work for against the friend. The judge states he’d do what was right and in the end that would be the best think for the friend. That’s not the answer Gyoo Man wanted but it is the answer he expected. 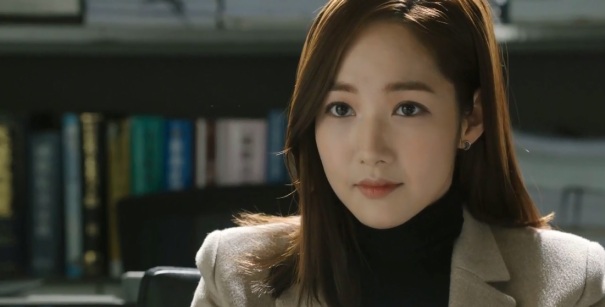 Il A meets with her former boss, prosecutor Tak, and asks him to continue to pursue justice. Gyoo Man’s father calls him.

The male assistant tells everyone that he went to trial – solo! Everyone is happy for him. 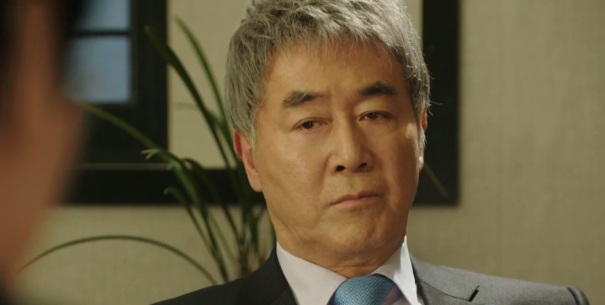 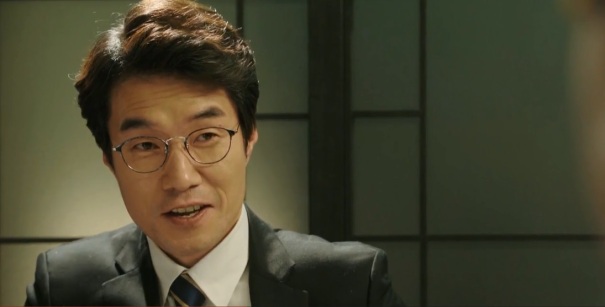 The male assistant frets he’ll stutter in court. Everyone gives him a pep talk. Jin Woo tells him to focus on his client who needs him. In court, he struggles a bit but then gets his act together and delivers his words with reduced to no stuttering as he argues for his client. Nice! The client gets a small sentence – victory! 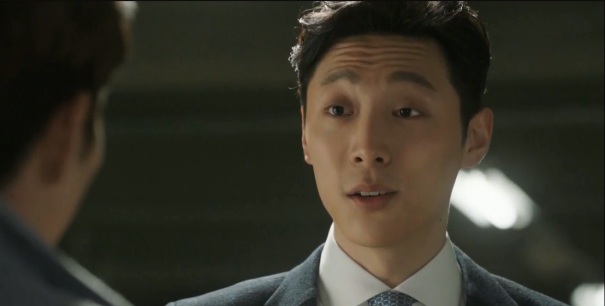 Dong Ho meets with Gyoo Man’s father who assures him that Joo Il will be released. Then he gets to the point. He advises Dong Ho not to dwell in the past. 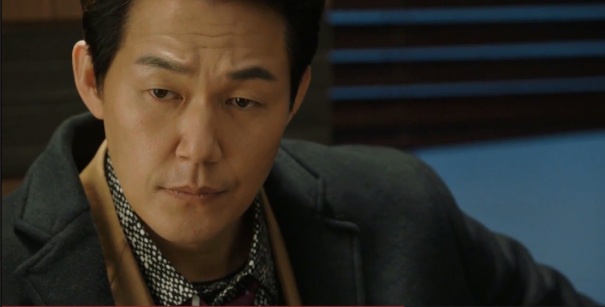 Dong Ho listens to the evidence the former president had on Gyoo Man’s father.

Yeo Kyung is next to a coworker who receives a call from Jin Woo about Gyoo Man’s upcoming drug party. He asks Yeo Kyung to check out the party.

Gyoo Man’s assistant searches the office and finds the blood stained knife from the long ago murder. Gyoo Man calls him to meet him. They meet and Gyoo Man apologizes for mistreating him. He blames Jin Woo for putting him on edge. He asks for understanding and loyalty. He offers a cash bonus.

Dong Ho visits Joo Il who report prison isn’t that bad. Dong Ho tells him that by the time he leaves prison only Gyoo Man or he will be alive but not both. Joo Il is not happy. Dong Ho asks for luck as he enters his last battle. He bows to his former mentor, friend, and father fiture. Joo Il can’t believe Dong Ho is going head to head with Gyoo Man and fears failure is the only outcome.

Team Jin Woo discuss their next moves with Gyoo Man. The male assistant get a recording device and camera to use at the party. They will all play their parts to get evidence on Gyoo Man. 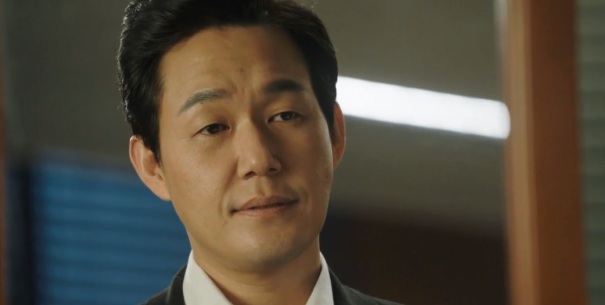 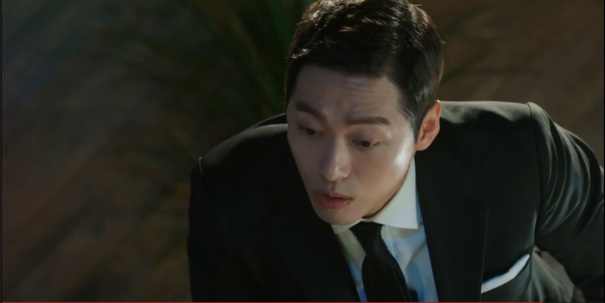 Jin Woo sees Gyoo Man get into a car. The police intercept the car. It isn’t Gyoo Man but his assistant. Thwarted Team Jin Woo stare at each other.

Jin Woo drives away in his assistant’s car and smiles – he got away scott free again!

My Thoughts
* This episode focused on setting up Gyoo Man and Dong Ho deciding to go after Gyoo Man’s father.   This episode had a feeling of hope, that maybe, just maybe, good could take down evil. I like that Jin Woo’s memory issues, while important, don’t stop the primary story line – get Gyoo Man and make him pay for his crimes. Jin Woo is dogged determined and Team Jin Woo has his back. I’m glad that Dong Ho finally decided to go after Gyoo Man’s father much to the horror of Joo Il.
* Jin Woo decided to use the Gyoo Man’s party planner friend to set the trap for Gyoo Man. It was a good trap but Gyoo Man managed to escape. I liked that Jin Woo decided to go the indirect route to take down Gyoo Man. Litlle does he know that Gyoo Man is planning a similar stragety to rid himself of Jin Woo by hurting Il A. I like that Jin Woo confides in his female assistant about his memory loss from the previous evening but pushes forward undeetered knowing the clock is ticking on his brain.
* Il A agreed to keep quiet about Jin Woo’s condition.   The female assistant requested her silence for Jin Woo’s dignity and Il A could not deny the request. As part of Team Jin Woo Il A worked to bring down Gyoo Man.
* Dong Ho decided to make Gyoo Man’s father pay. Finally, he makes the choice to leave Team Evil. Gyoo Man’s father is as loathsome as Gyoo Man but has a better control on his anger so he isn’t as repulsive as his son. I look forward to Dong Ho taking Gyoo Man’s father down.
* Gyoo Man ind his father are evil. They know they are being pursued and will fight back again Jin Woo and Dong Ho.
* Yeo Kyung let her brother escape from the raid at the drug party. She doesn’t know how loathsome Gyoo Man is. One day she’ll find out and it will be a rude shock.