When our leading man gets mired and is unable to extract himself…what will our leading lady do?

The players: Kim Tae Hyun (Joo Won), a gifted surgeon, incurred debt to pay for dialysis for his sister, Kim So Hyun (Park Hye Soo). He assumed the Yong Pal identity to be a doctor to gangsters for cash. It fell apart when the police found Yong Pal’s scalpel and tracked it to the hospital. The police talked to Chief Surgeon Lee (Jung Woong In), who hates Tae Hyun. Instead of turning Tae Hyun over to the police, Chief Surgeon Lee presses Tae Hyun to tend to VIP only patients. Desperate to keep his job so he can continue to dialysis for his sister (and pay his debts), Tae Hyun agrees. Our leading lady is VIP patient Yeo Jin (Kim Tae Hee). Yeo Jin was tended to by Chief Surgeon Lee who is in cahoots with her brother, Han Do Joon (Jo Hyun Jae). Do Joon’s wife Chae Young (Chae Jung An) is working against her husband.

Tae Hyun leaves Yeo Jin and takes the woman to the hospital. He manages to get her into a room on the 12th floor. The baby and mother survive.

Tae Hyun strolls the hospital, bonds with the gangsters, and is surprised that his father and sister are there. Why isn’t his sister in the states getting treatment? His sister’s care is being paid for by Yeo Jin’s brother, Do Joon. With Chief Lee fleeing last episode, there a new guy in charge. He tells Tae Hyun his sister’s trip to the states was derailed due to lack of funds.

I really like the side pony tail on her.

Yeo Jin prays for Tae Hyun safety. She breaks something, that’s likely not a good omen. 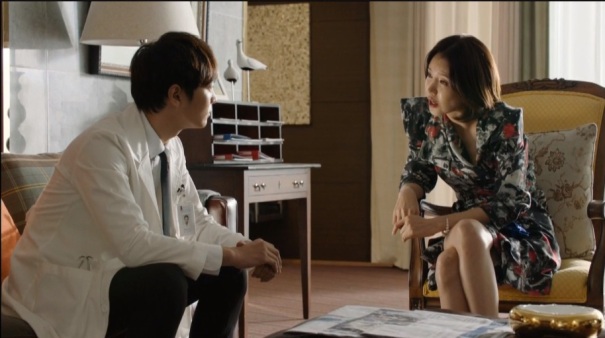 Chae Young is cool with her room being used for the mother and new baby. She tells Tae Hyun that she’ll protect him. Tae Hyun tells her he will protect those he loves. Chae Young nixes that. Only she can protect him. 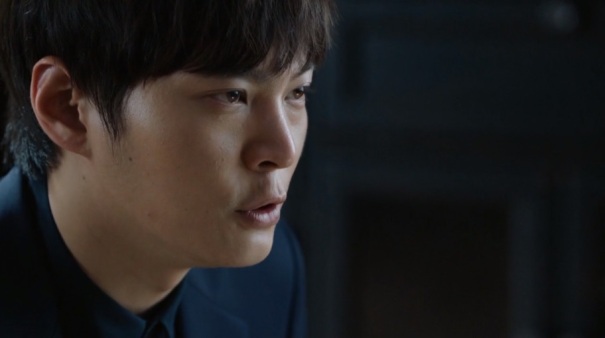 Tae Hyun meets with Do Joon. He falls to his knees and begs for his sister’s life. He promises nothing happened between his wife and him. Do Joon gets mad. He informs Tae Hyun he is no longer useful and is being discarded. When Yeo Jin died, his usefulness ended.

As Tae Hyun exits, Do Joon’s assistant tells him to send his sister to the states.  He must extract himself from Chae Young’s orbit. Tae Hyun agrees. He gets in a good shot when he tells the assistant he hopes his expiration date is a long time in coming.

Back at the hospital he wanders into Yeo Jin’s old room. He goes old school and writes her a note, saying the mother and baby are well. Once his sister leaves for the states, he’ll return. Then he reverses the statement and says he may never be able to come back. 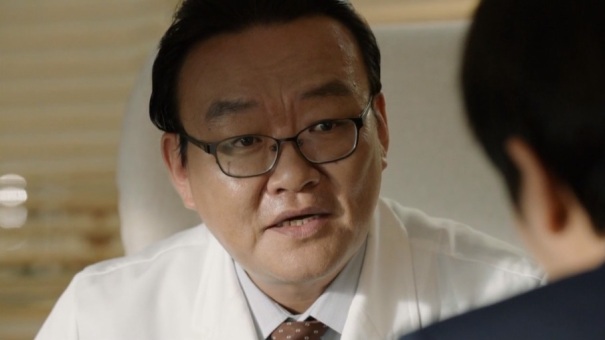 His old mentor asks Tae Hyun to lobby for someone from surgery to be the new 12th floor chief. He argues he can keep Tae Hyun safe. He dangles the surgery department fellowship in front of Tae Hyun. That doesn’t go over well with his rival resident who is eavesdropping.

Tae Hyun tells the father he’ll have to return to the church solo as he has things to take care of. He gives the father his note to Yeo Jin.  This time it is Chief Nurse eavesdropping.

Tae Hyun tells his sister she can go to the states for treatment.

Rival resident seethes and decides to call the police.

Tae Hyun takes his sister to the airport. They share a sweet moment.

Oh no, the police are headed to the airport too.

Oh no, Chief Lee is at the airport.

Tae Hyun advises his sister to live for herself, get through the treatment. She agrees and promises to return healthy and happy. She’ll have him in her heart. He agrees he is always with her. He gets teary. She is fine. She board the plane. 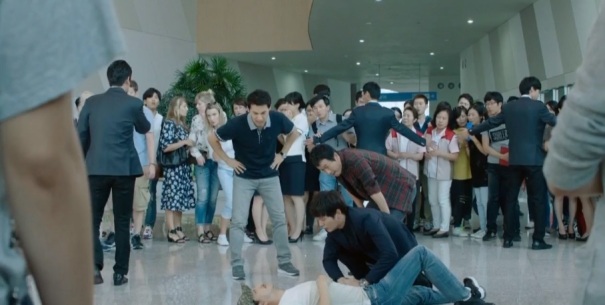 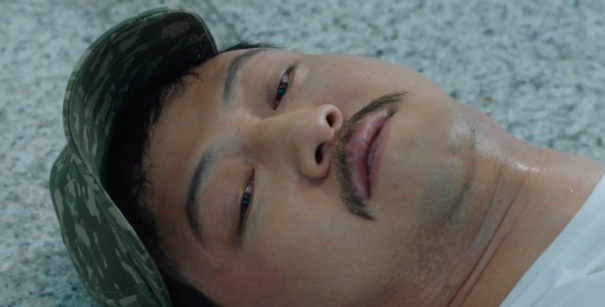 Chief Lee runs into Tae Hyun. He runs away from men chasing him. Tae Hyun runs after them. The police join in the chase. Tae Hyun loses Chief Lee. When Chief Lee emerges from his hiding spot he blends into the crowd. Unfortunately someone knifes him in the stomach. The screams alert Tae Hyun and he runs to Chief Lee’s side. The police spot Tae Hyun over Chief Lee’s body. Into the ER center we go and Tae Hyun tries to save Chief Lee. 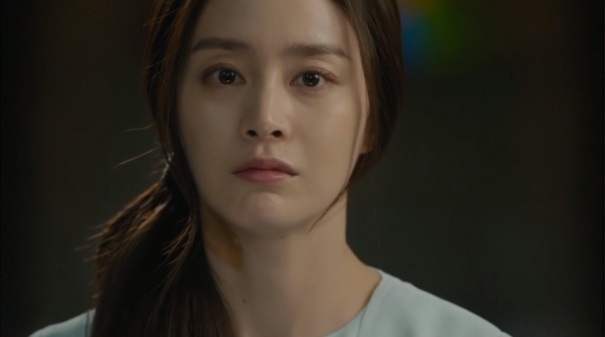 The father returns to the church and give Yeo Jin the note from Tae Hyun. She reads it and sees that he is releasing her so she can move on from her past, which he is part of. He states he cannot give up being a doctor for her. He says he will not return. 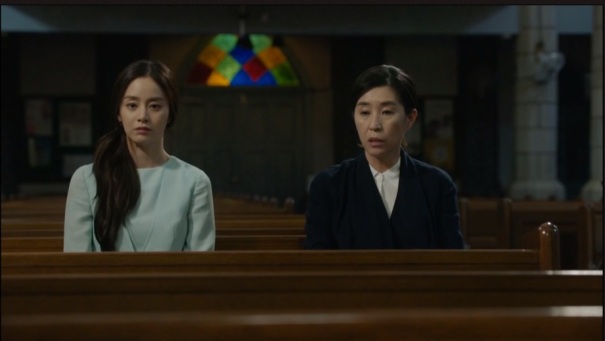 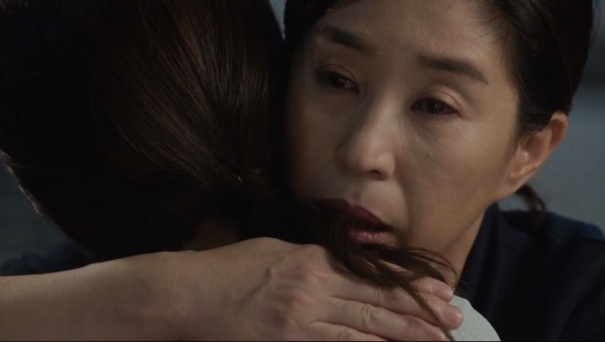 Surprisingly Chief Nurse shows up at the church. She tells Yeo Jin that those that cared for her are dying. She shares she was cared for her father at the end. Before he died he called for Yeo Jin. He hugged and apologized to Yeo Jin. That rips Yeo Jin up.  “I love you Yeo Jin. I’m sorry Yeo Jin.” The nurse shares and hugs Tae Hyun for her father.

The police interrogate Tae Hyun about his illegal house calls. Tae Hyun refuses citing doctor patient confidentiality. The police reveal he has a loan shark. Tae Hyun cites his sister’s surgery. The questioning is interrupted when Tae Hyun is invited to tea with the chief of police.

I do not like the police officer that cannot leave Tae Hyun alone. He bugs me!

Tae Hyun returns to the hospital. Secret surgery nurse tells him to come quickly. The patient is Chief Lee and no one will do surgery. The rival resident and his coworkers see Tae Hyun. It is obvious rival resident is stunned that Tae Hyun is there and not at the police station. Then Yeo Jin exits her private room, bandaged up. Tae Hyun stares at her. She stares at him.

The untapped potential of this series can be frustrating. There were interesting things that happened this episode – Chief Nurse going to see Yeo Jin, Do Joon’s assistant worrying about his own expiration date, Yeo Jin facing the pain about her father’s death, and Chae Young’s claim she was the only person that could keep Tae Hyun alive. There were groan worthy things that happened – the airport chase scene was silly, the noble idiocy note Tae Hyun wrote to Yeo Jin, and the police’s glee at grabbing Tae Hyun.

Finally Tae Hyun’s sister headed to the states for treatment. I was afraid that somehow Chief Lee or the police would stop her departure. Once again, Tae Hyun is quick to fall on his knees and beg for what he wants. This time he begged Do Joon to support his sister’s surgery.

It is clearer every episode, Yeo Jin is the most interesting character. Tae Hyun is a slave to money to save his sister. This forces him to not be able to go for what he wants. Instead he is stuck when those with money demand his support. I’m ready for Yeo Jin to take stock and come up with a plan that will free herself and Tae Hyun from the chains that bind them. I love her first step. It was a bold move to return to the hospital to help her man (and hopefully herself too).