The Time We Were Not in Love Episode 12 Recap

Ha Na gives Seo Hoo an ultimatum. Won gives Ha Na the opportunity to realize what his feelings for her are. 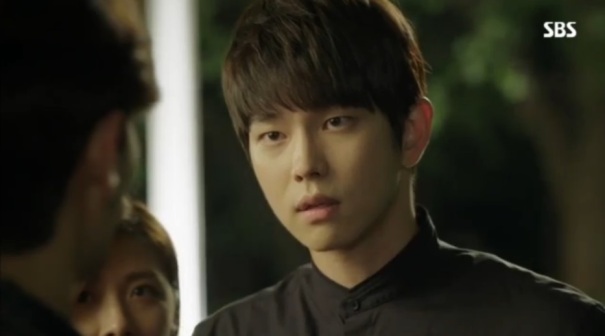 Our leading lady, Oh Ha Na (Ha Ji Won) and our leading man, Choi Won (Lee Jin Wook) discuss whether they should return to their close friendship. Ha Na admits when Won left, she felt she lost their friendship and may be too scared to restart it. Won assures her their relationship does not need to move beyond friendship. The value of their relationship is the shared experiences and support they give each other. They hold hands and agree, they are just friends.  Ha Na’s boyfriend, Cha Seo Hoo (Yoon Gyun Sang), arrives and takes their hands apart. Seo Hoo declares even if they are just friends, he cannot tolerate it. Wait one minute, didn’t he declare to Ha Na’s girlfriends he would accept her friendship with Won?

Seo Hoo pulls Ha Na away. He can’t believe that on the day he confesses her friendship with Won on their engagement day 3 years prior caused him pain, she once again turns to Won after they have a fight.  Ha Na counters, why can’t you accept my friendship with Won. He has always been there for me. Why did you leave 3 years ago? Why didn’t you contact me? I chose you over my family, my friends, and Won. I can’t push you away. Our bad memories don’t matter to me. Seo Hoo finally hears her. He hugs her.

After the meeting Ha Na calls Seo Hoo who assures her he will not do the world tour. He deserves a break after 3 years away from Korea. He tells Ha Na to continue planning the charity concert.

On duty, Won meets an old teacher from high school.

Blast from the past…Won watches Ha Na and the teacher catches him. He surmises Won likes Ha Na. Won denies it. The teacher told Won he was a good writer but recommended he not write for a living because it did not pay well.

When Won learns the teacher and his wife are celebrating 35 years together he creates a special tray for them. They love it. The teacher tells Won he’s got his old writing assignment. Won promises to stop by and get the assignment soon. His teacher tells Won to live his life without regrets.

Seo Hoo stops by the store and Ha Na has him sign autographs for his fans. President Min sees this and does not look pleased.

At the sauna, Won’s cousin, Choi Mi Hyang (Jin Kyung), tell pianist Park Chong that they should stop seeing each other. He calmly states next time she can pick their date location. She flounces away. He tells her he’ll call her soon.

Won gets a text that the old teacher from high school has died. He attends the service and offers his condolences. As he exits Ha Na is there. She offers her condolences.  At the meal, Won’s friends comment about their former friend Dae Yoon. Seems like Dae Yoon liked Ha Na. The teacher left items for his former students. In Won’s envelope are pictures and the script he wrote. Nice tie-in to the flashback of the teacher taking a pictures of Won.

President Min visits Seo Hoo at his apartment. He is blunt – her presence is not welcome. She returns – this is like it was 3 years ago. Same woman. But this time I came after you. She wonders if she eliminates Ha Na if his attitude will improve. She asks if she should reveal the real reason he did not make the engagement party 3 years ago. He asks her to leave. Hmm, this is making me even more curious about why Seo Hoo did not show to the engagement party.

When Ha Na visits Seo Hoo he pulls her into an almost desperate hug. He denies anything is wrong. His music choice is frantic. Seo Hoo tells her again nothing is wrong. Absorbed in his own issues, Seo Hoo neglects to ask Ha Na about the funeral, and she notices that.

Won visits Dae Yoon’s memorial marker. He remembers Dae Yoon’s request to give Ha Na a love letter. A request Won never fulfilled. Won promises to leave the immature version of himself that could not confess his feelings behind with his friend.

Walking home Ha Na and Won meet. She asks to see his script from high school the teacher left him.

In her room, Ha Na looks at the pictures the teacher left. One in particular shows her looking at something with longing.

Mi Hyang meets pianist Park Chong at a posh eatery. Ha Na and Seo Hoo join them. The ladies are surprised to see each other but smooth it over in a private conversation. The men are clueless.

Won and Ha Na have a comfortable conversation. Mi Hyang admits to Won that pianist Park Chong is Seo Hoo’s teacher and she met Ha Na and Seo Hoo on her date. He is understanding.

Won visits the old school and answers questions from students. Won tells students that waiting for better opportunities is not giving up.

Ha Na’s boss tells her the charity concert is cancelled. Trying to salvage the concert, Ha Na meets with President Min. Bluntly President Min tells Ha Na that Seo Hoo will be taking orders from her not Ha Na. She suggests marriage would waste Seo Hoo’s talent. She suggests Ha Na break up with Seo Hoo. Ha Na asks what kind of relationship she has with Seo Hoo. Ask him yourself is President Min’s response.

Upset, Seo Hoo is challenged to come find Ha Na, she believes he should be able to figure out where she is. Seo Hoo finds her. He tells her he may leave for Austria for a week. Ha Na asks if he’ll be traveling with President Min. Seo Hoo confirms this. She asks him not to go. She’s afraid they’ll break up if he leaves. He counters this is work related. She counters if he takes the trip don’t expect to come back to her. Seo Hoo is taken aback. He asks if something happened. Upset, she asks why can’t he stay? He tells her it is only 1 week then he’ll be back. Ha Na realizes the decision is made. Her request will not be granted. She walks away.

Won looks at the envelope from his teacher. The next morning, Ha Na finds the play in her mailbox.

At the airport Won sees Seo Hoo and President Min.

Seo Hoo texts Ha Na and tells her he’ll see her in a week and likely do the charity concert. 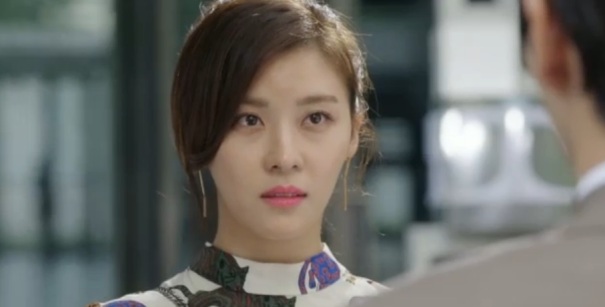 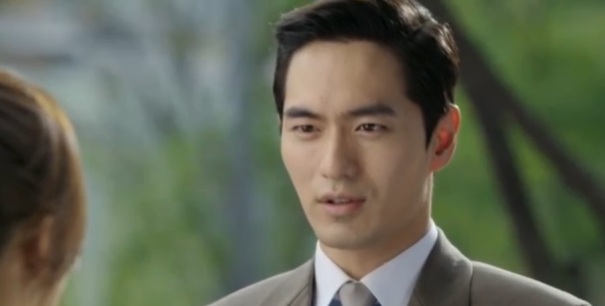 When Ha Na exits work, Won is there. She tells him “long ago when you said that you would never love me, until now, I believed that. ”

My Thoughts:
1. Decent episode but writers are approach to the story has me a bit mystified. Last recap I noted that Seo Eun’s chance with Won was only early in the story and she’s been on the shelf ever since. Ha Na’s second chance with Seo Hoo simply is not compelling. They’ve had a couple of flashes of chemistry but their relationship seems solid in the flashbacks and weak in present day. Won’s focus since episode 6 has been Ha Na and only her. Won is a great guy so it makes sense that he would not entertain any other dalliance while he waits for Ha Na. Now we all wait for Ha Na and Seo Hoo to implode. Enter territorial and powerful President Min. The personal relationship between Seo Hoo and President Min has ended. She wants it to restart, he does not. She uses her power to extract Seo Hoo from Ha Na via a business trip. She uses her power to ask Ha Na to leave the project then she cancels the charity concert. Ha Na delivers an ultimatum to Seo Hoo, take the trip, we are done. Won decides to go big or go home and gives Ha Na his play in which specifies he loves Ha Na.
2. Where does the show go from here?
* Won’s love is unwavering. I can’t see him turning to Seo Eun unless Ha Na got engaged and Won got drunk.
* Ha Na has been open with Seo Hoo. He has her. Why did she choose to deliver an ultimatum over a business trip? Maybe she suspects President Min would like to rekindle with Seo Hoo, but he is clear. He wants Ha Na. He wants to marry Ha Na. Seems like a destined to fail ultimatum. Is that what Ha Na wants?
3. There are 16 episode in this series. 4 more episodes to go. How will the writers arc the story over the next 4 episodes? Will Ha Na believe Won loves her? Will Won admit he loves her? Will Ha Na break his heart by stating until she’s over her relationship with Seo Hoo they have no chance? Will a broken hearted Won then turn to Seo Eun? Will Won really believe that he’s got no chance with Ha Na when he suspects that Seo Hoo may have more than a professional relationship with President Min? What will dissolve Seo Hoo and Ha Na? Right now, he is committed to their relationship. He does not appear to want to reengage President Min. He’s got to do something to implode them. Here’s one thing I’d like to see – how about Ha Na recognizing that Won is a fabulous guy and for a moment thinking she’s blown her chance with him? Won’s unrequited love has been clear from the first episode. It is Ha Na that has hidden her feelings for him. I hear her say she believed Won would never love her. Ha Na, open your eyes. Won is there for you, no matter what.
4. I’m a bit irritated by Ha Na and Seo Hoo. I’m miffed Won’s  1 month trip made Ha Na feel deserted. What? You went to Paris, became involved with Seo Hoo, yet you weren’t deserting Won? Won’s trip was all about not watching Ha Na and Seo Hoo reconnect. Ha Na told him you are too late when he wanted to change their relationship to romance. Wouldn’t Ha Na understand that Won needed a breather after she kicked his heart to the curb? And what about Seo Hoo’s pledge to Ha Na and her friends that he would accept Won? He reverses this stance and tells Won to back away from Ha Na, he cannot tolerate their friendship.
5. The sixth song of the OST has been released, “Distance With You” by Every Single Day. Check is out via the link or the embedded video below.