Boy Sitter: Episode 11: Jian Ren elects to keep his promise to Dia Bo and lies to Yuan Fei instead. The ramifications? Yuan Fei asks Hao Ran to marry her. He accepts. 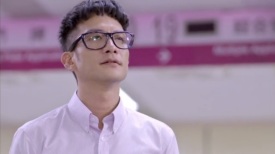 Yuan Fei (Annie Chen) and Jian Ren (River Huang He) listen and watch while married couple and best friends, Wen Hua and Mei Lin, consider signing divorce papers at the registry. Wen Hua’s mother is particularly strident that Wen Hua sign the divorce papers. When Mei Lin signs first, Wen Hua believes she has given up on him and signs the divorce papers too. 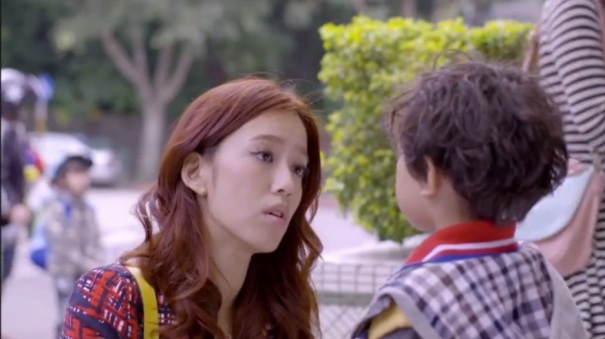 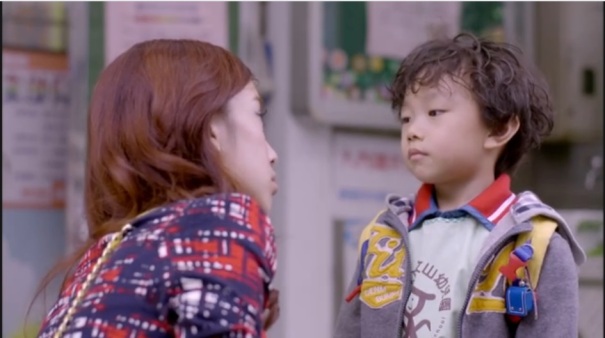 To that end, Dia Bo enlists Jian Ren to take him to the mountain top to watch the meteor shower. Dia Bo is not stupid, he takes Jian Ren’s cell phone so Jian Ren cannot call his mother. He elicits a pinky swear promise from Jian Ren not to tell his mother of their adventure.

When Yuan Fei goes to school to pick up Dia Bo, she finds him already gone. The teacher cannot identify who picked up Dia Bo. Frantic, Yuan Fei begins the search. Hao Ran, Wen Hua and Wen Quig all help search for Dia Bo. Xiao Ren even joins in the search.

Jian Ren tricks Dia Bo by scaring the poor child that he was alone in in the dark. As Dia Bo clings to “Uncle” (Jian Ren) crying, Jian Ren retrieves his cell phone from Dia Bo’s backpack and texts Yuan Fei he is with Dia Bo.

Of course, when Jian Ren sends the text, the timing works that Yuan Fei sees a child she thinks is Dia Bo. She has Hao Ran (Sia Melvin) stop the car and as she exits her cell phone clatters to the ground unnoticed. The child is not Dia Bo and she’s lost her cell phone. She never sees the text from Jian Ren. Everyone is clueless Jian Ren is with Dia Bo. 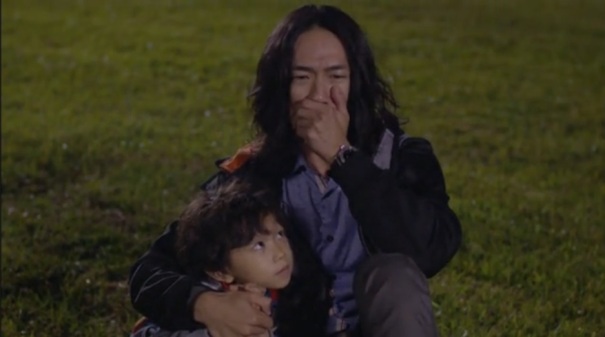 Jian Ren and Dia Bo watch the meteor shower. Dia Bo makes a touching request for a father. Jian Ren cannot hold back the tears. But he does not tell Dia Bo the truth either.

In route from the mountain, Jian Ren calls Xiao Ren that he and Dia Bo are heading to Yuan Fei’s home. Yuan Fei grabs the phone and has him detour to the nearby park, central meeting point for the Dia Bo search team. 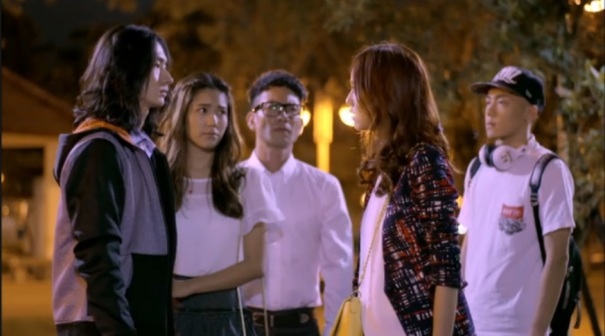 Jian Ren sees all the people and gets the gravity of the situation but he cannot break his promise to Dia Bo not to tell Yuan Fei that they saw a meteor shower. Jian Ren’s unconscious gesture that he is lying is rubbing his fingers. Yuan Fei is too distraught to notice the lie, when Jian Ren comes up with a glibly lies  that he and Dia Bo played father and son to get a new client.

Livid that Jian Ren would use Dia Bo for business, Yuan Fei slaps him, takes Dia Bo and leaves.

Jian Ren’s friends tell him his actions were not cool.

The next day, visiting a factory Yuan Fei and Jian Ren argue near a forklift. As Yuan Fei strides away from Jian Ren she does not see the oncoming forklift. But Jian Ren sees the impending collision and pushes Yuan Fei out of the way. She is knocked out. Jian Ren takes her to the hospital.

As Jian Ren speeds down the hallway the doctor asks his relationship to Yuan Fei. Jian Ren wonders if he should admit is the Yuan Fei’s son’s father or ex-boyfriend. In the end, Jian Ren claims he is not family. The doctor shuts him out of the treatment and rushes off. Jian Ren picks up his cell phone and calls someone. 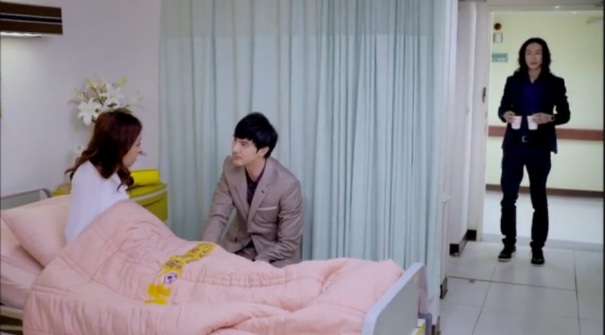 When Yuan Fei wakes, she realizes she was close to death, close to leaving Dia Bo alone in this world. She cries until a man’s hand grasps her own. It is Hao Ran. Yuan Fei realizes Dia Bo’s needs come first. She asks Hao Ran to marry her. Hao Ran accepts. Of course, Jian Ren overhears the proposal and acceptance. He leaves the hospital.

Xiao Ren’s lease is about up. Jian Ren tells her she can live with him while she is looking for another place. 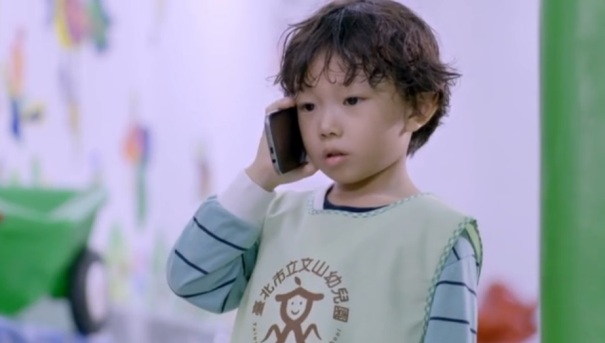 Dia Bo calls “uncle” Jian Ren but Xiao Ren answers the phone. They recognize each other’s voices. Dia Bo starts crying upset that “uncle” Jian Ren got in trouble with his mother keeping a promise to him. 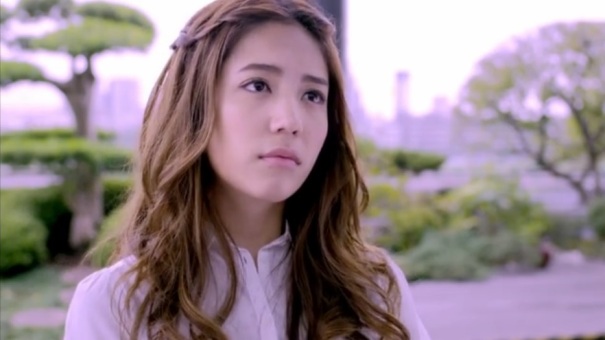 Xiao Ren tells Yuan Fei that Jian Ren lied about what he did with Dia Bo that day. When Yuan Fei hears that Dia Bo and Jian Ren went to see a meteor shower she remembers her broken promise to Dia Bo.

Comments:
* Jian Ren’s decision to keep his promise to his son cost him a future relationship with Yuan Fei.  Dumb choice to lie to Yuan Fei seeing how upset she was that Dia Bo had been missing. Adding to the stupid things Jian Ren did this episode, he invited Xiao Ren to live with him. Jian Ren’s fear of fatherhood and commitment, is making a royal mess of this situation. His interactions with Dia Bo were good. When he and Dia Bo did identical movements in the taxi…cute!
* Yuan Fei’s brush with death prompted her to propose to Hao Ran.  She is upfront that she does not love Hao Ran. But she promised to try and fall in love with Hao Ran who reasonably wants them to try and make their marriage real. Basic question…why not live together or co-parent without marriage? Forget that, the story line dictates they proceed on the path to matrimony to get Jian Ren unstuck and willing to commit. Will it work?
* Hao Ran was strong and supportive of Yuan Fei in her hour of need. There is still no chemistry for a romantic relationship. But you cannot blame Hao Ran for requesting that Yuan Fei try to develop feelings for him to make their marriage real.