New ground rules: Seo Jin is in control by day and Robin is in control by night. When Seo Jin wakes to find himself with Ha Na and the circus crew on a overnight trip, he is forced to pretend he is Robin. Easy to say, hard to do.

Seo Jin (Hyun Bin) and Robin (Hyun Bin) (his alternate personality) communicate through their videos to each other. Robin warns Seo Jin not to make Ha Jin cry. If necessary Robin claims he will “reveal his true identity”. What does “true identity” mean?  There must be more to the story of how Robin was created from Seo Jin’s anguish. 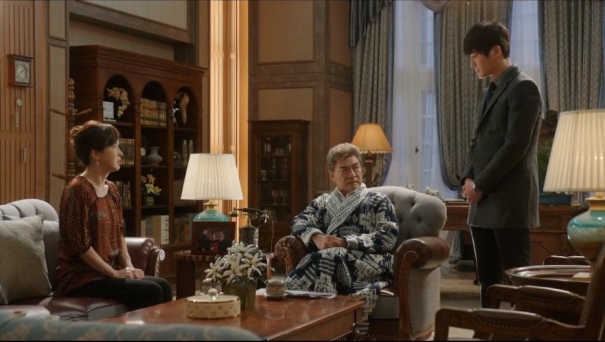 Seo Jin’s parents, Koo Myung Han (Lee Deok Hwa) and Han Joo Hee (Kim Do Yeon), fret over Robin’s increasing awareness. They worry they could deal with something similar to the “last mess over a girl”.

Robin is thrilled on the first night as he enters his room, grabs his cell phone all under the imagined watchful cranky eyes of Seo Jin. Robin’s white car is sweet!

Robin is about to head out when he spots Jang Ha Na (Han Ji Min) leaving the house for a nighttime walk in the snow. Unbeknownst to Ha Na, Seo Jin’s crafty cousin’s man is watching her. When Robin sneaks up behind Ha Na, she screams in terror. The playful joke of following her is awry and Robin tries to calm Ha Na down. She ends up crying. Hmm, didn’t Robin admonish Seo Jin not to make her cry?

Robin amazes Ha Na with his quick sketches of her concepts for the new show for the circus. He suggests she hire him. She is agreeable thinking he is down on his luck and cheap. Robin says Ha Na must work the contract details with his agent. 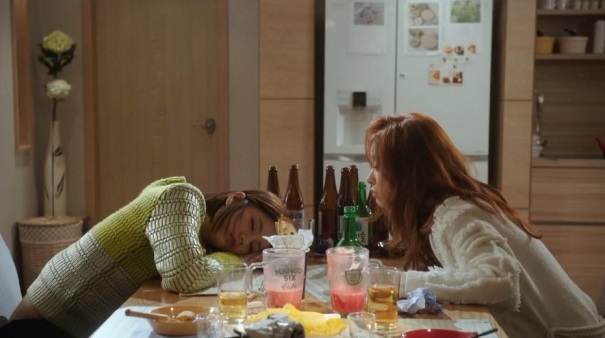 Robin takes Ha Na to meet with his agent Publishing Company CEO Min (Maeng Sang Hun). The men are thrilled to see each other after a 5 year absence by Robin. CEO Min’s daughter Hyeri (Min Woo Jung) hits Robin repeatedly angry and hurt he dropped out of her life 5 years ago without a word. Yep, she likes Robin. Yep, she is jealous when she sees Ha Na. The ladies drink themselves into a stupor. The gentleman catch up on old times in a more sober state.

The next morning Seo Jin wakes to an amusing rocket alarm clock that forces Seo Jin to blearily exit the warm bed to replace the rocket that fire when the alarm went off. Seo Jin tries to recall what happened the previous evening. 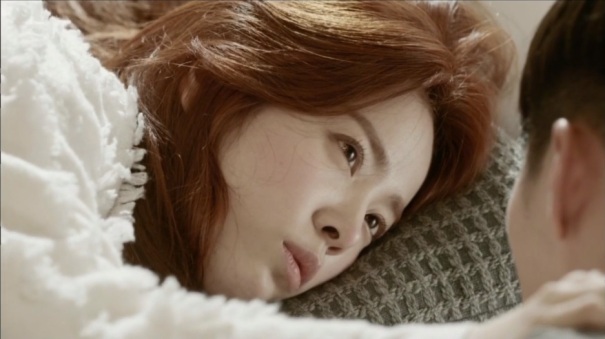 Ha Na wakes hung over and tries to recall what happened the previous evening. We see that Robin piggy backed Ha Na to her room. She was friendly with Robin in a cute drunk way.  Ha Na shudders remembering how she embarrassed herself with Robin last night. Seo Jin’s assistant calls her to remind her of her hypnosis session with the hypnotist doctor, Yoon Tae Joo (Sung Joo). 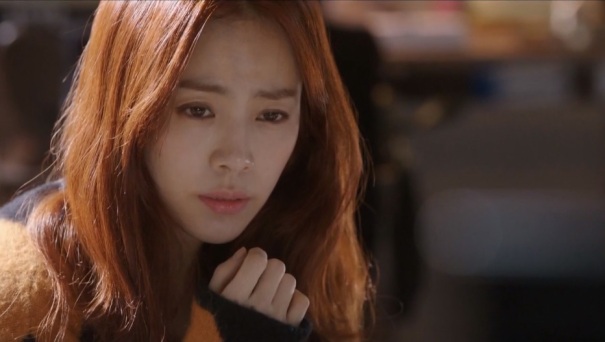 During her hypnosis session Tae Joo leads her to a calm room of art and asks her to visualize her assailant. She does see the man that attacked her and Dr. Kang for several brief flashes. The man chokes her and Tae Joo is able to lead her away from those thoughts back to safety in his office.  As she exits the office she sees the CT scanner technician and asks Tae Joo who that man is. She senses something but can not put all the pieces together.

That evening with Robin in control, he and Ha Na head to a circus retreat. In route Robin manages to avoid one car tailing them but exchanges it for a truck in hot pursuit of them. Robin manages to ditch the truck but end up in a ditch himself up the road. As he groggily looks  over he sees that Ha Na is passed out in the passenger side. Concerned Robin piggy backs Ha Na to the local doctor. Ha Na is fine but overcome by the strain Robin passes out. 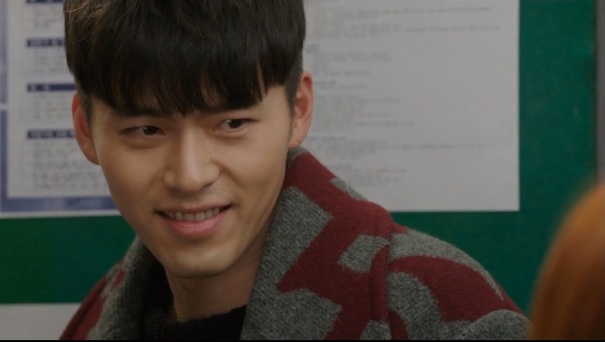 When he wakes it is not Robin in control but Seo Jin. Horrified Seo Jin realizes he must pretend to be Robin. But pretending to be Robin is not easy for Seo Jin. Ha Na takes him to the house the circus team is staying at for the overnight. 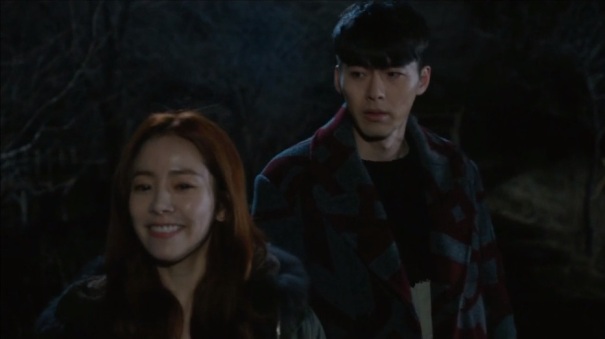 A goat startles Seo Jin. The fact that he must use an outhouse…he cannot believe it. Ha Na realizes a rich guy like Robin is not used primitive accommodations and stays with him while he is in the outhouse. She sweetly holds his hand while they walk back to the house. Seo Jin cannot believe he must make the animal sounds when Ha Na asks him what sound a cow, goat, cat, etc. makes. 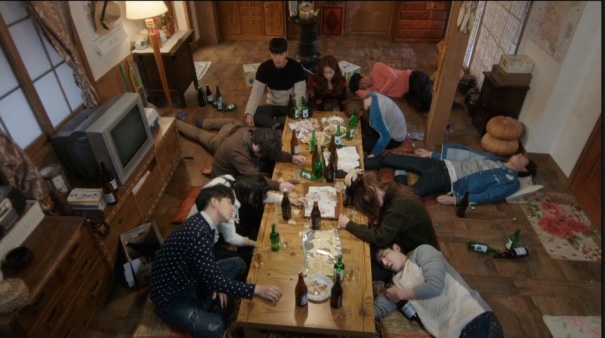 Ha Na asks Robin to draw a sample sketch. Seo Jin knows he cannot draw like Robin so he says he can only draw alone without other people. But Seo Jin’s drawing talent only extends to knowing how to hold a pencil. Stuck, Seo Jin determines he must fall asleep or pass out to let Robin reemerge. What’s a guy to do in this situation? Drink! Determined to pass out from alcohol Seo Jin as Robin drink with the circus team. Turns out that Seo Jin has a high tolerance for alcohol and drink everyone under the table. 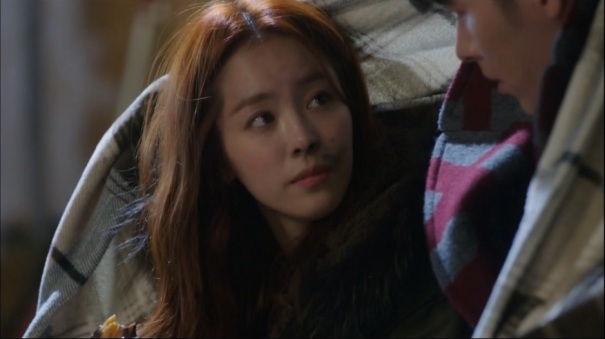 Bummed he sits by the fire. Ha Na joins him and they eat sweet potatoes. Ha Na gets black marks on her face and Seo Jin smiles. She is pleased that he is finally relaxing.  Seo Jin sees that Ha Na is cold. Not wanting to but feeling he must, he shares his blanket with Ha Na. As she sinks into the warmth of the blankets and the proximity of Robin she admits that she thinks he is a good person and she likes him.

Comments:
* Light, fluffy episode with fun moments when Seo Jin struggled to act like Robin. Hyeri certainly liked Robin in the past and sees Ha Na as a rival but nothing bonds people like drinking together and our two ladies raised several glasses together. Crafty cousin has Ha Na followed believing she was the key to Seo Jin’s uncharacteristic behavior. He is not wrong about that!
* Hyun Bin as Robin frightened Ha Na as she walked in the snow under the umbrella. Seo Jin saved Ha Na from falling down the stairs so yet again he saved her. Don’t get me wrong, I like Robin and see his life as a webtoon artist as interesting but Seo Jin is the primary personality so I’m rooting for his evolution more than Robin’s right to exist as a standalone person. I like the Robin being a webtoon artist because the story for this series was inspired by the webtoon “Dr. Jekyll Is Mr. Hyde” by Lee Choong Ho.
* Han Ji Min as Jang Ha Na got drunk with Hyeri and got drunk with her circus team too. She had less to do this episode but had several sweet moments with Robin and Seo Jin. When she drunkenly admitted to Robin (but it was Seo Jin) that she liked him, it was a nice moment. I look forward to Seo Jin developing feelings for her too. When both personalities are emotionally invested in Ha Na, it will be good.
* The third song of the OST was released 4 February 2015. Check out the ballad “In Your Arms” by Yoon Hyun Sang. Brief article about the song (link).  Embedded video below.