Our fabulous foursome investigate In Ha’s Mother, reporter Song Cha Ok, to convict or exonerate her. Bum Jo tells In Ha they should date. Is she ready to move on from Dal Po? 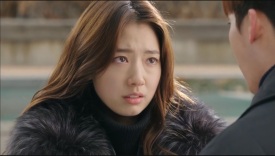 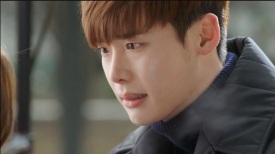 In Ha determines the death certificate was forged by the bus driver to falsely accuse her mother. She almost destroys the evidence knowing that Dal Po is consumed with revenge against her mother. Unwittingly Dal Po stops her. Dal Po forces In Ha to explain the death certificate was forged and therefore her mother is not guilty. Dal Po tells In Ha to this information a secret. In Ha agrees.

Dal Po casually admits to Bum Jo that he ended things with In Ha. Bum Jo is pleasantly surprised by the news.

Grandpa and In Ha’s Father visit Dal Po in his new home. Recall Dal Po moved out of Grandpa’s house, lying it was painful to live there, and into the home of his older brother, Ki Jae Myeong, who is in jail for murder. Dal Po is shocked with their visit. Grandpa candidly states he did not want to be rude and heartless (as Dal Po is being). Grandpa further states that contrary to Dal Po’s wishes he will not unadopt him. In Ha’s Father tells the land lady if there are any issues to contact him. After Dal Po sees them out, he finds a warm scarf, some money, and a note from Grandpa to take care of himself. Sweet and touching of Grandpa to reach out to Dal Po. Even In Ha’s Father cares for him, good to see. 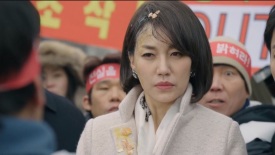 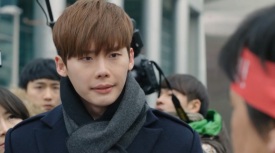 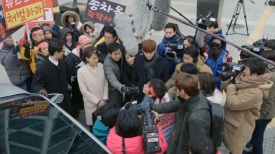 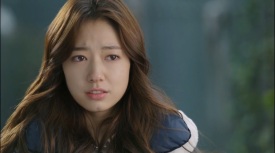 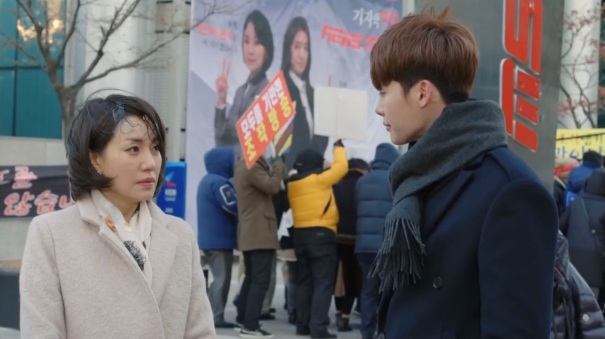 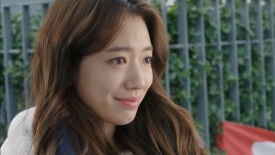 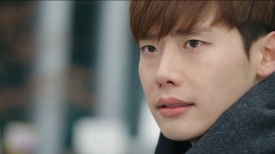 In Ha’s Mother decides to confront the swarm outside the TV station. Dal Po and Yoo Rae are there for YGN. In Ha and Bum Jo are there for MSC. Things get ugly as the bus driver accuses Cha Ok of telling lies. The crowd crushes around them. An egg is thrown on Cha Ok’s head (flashback to 13 years earlier when an egg was thrown on young Dal Po’s head). Dal Po stares at Cha Ok believing he can suppress the death certificate truth. But then he looks into In Ha’s eyes. Her eyes understand what he wants to do but also relate what he should do. Breaking free of the grip of revenge, Dal Po turns to the bus driver and asks why he forged the death certificate. Confusion, denial, but then admission follow from the bus driver. Now the bus driver earns the ire of the crowd who swarm around him and away from Cha Ok. She is stunned and asks why he did that. Dal Po simply states he was doing what she should have done 13 years ago. He asks why no one believes her and wonders if she believes in herself. In Ha and Dal Po smile at each other, understanding what happened and why. I love the support they give each other even though they are estranged. Had to chuckle at the nod to “I Hear Your Voice” with similar music and Dal Po thinking as he went around a revolving door (this was also done on IHYV). 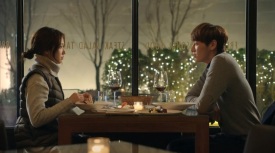 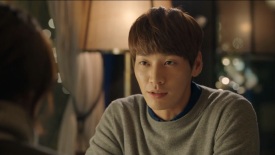 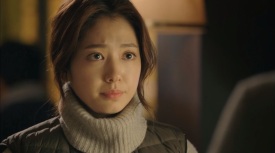 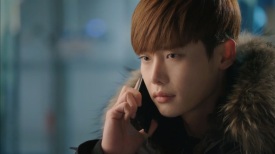 Bum Jo seizes the opportunity to court In Ha by inviting her to dinner. It is his birthday he informs her. Unable to say no, they dine together. Just as she excuses herself from the table, Dal Po calls. Bum Jo answers the phone and tells him that he wants a chance with In Ha. He tells Dal Po to listen while he talks to In Ha. When she returns to the table Bum Jo confesses he was the one that intercepted her texts for all those years. He admits to looking for her and wanting to get to know her better. In Ha is surprised but not angry pleasing Bum Jo. He states he likes her and wants to date her. At this point Dal Po stops listening and disconnects the call. In Ha considers it but her hiccuping betrays her real thoughts and she tells him that dating is not a good idea. Thank goodness her Pinocchio syndrome eliminates the cliche date another when you love someone else.

In Ha’s Mother resigns. As she packs up her desk and leaves, her box of belongings spill. In Ha helps her retrieve the items from the floor. As she helps her mother she pockets the cell phone with her text messages from long ago. 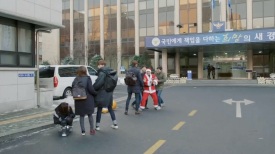 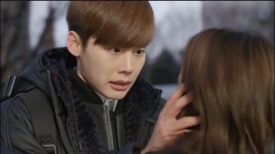 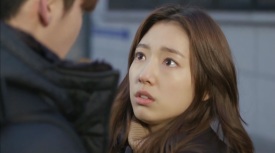 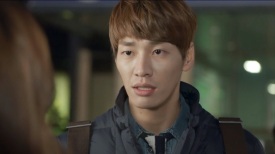 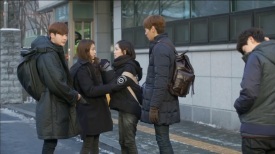 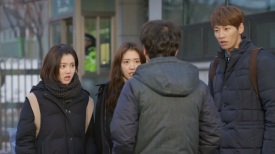 Bum Jo’s mother learns that a man playing Santa at her department store has stolen merchandise. She urges the police to make an example of the man for traumatizing children by stealing. Our foursome are walking up to the police station when the Santa tries to escape. In Ha slows the man down by throwing a shoe at his head. Good aim, it is a direct hit. Angered the man charges In Ha. Dal Po leaps to her defense and kicks the man knocking him down. He goes to In Ha to check on her. The man charges again. This time Bum Jo knocks the man down and Chan Soo (police officer and high school quiz show rival) arrives to take him back into the police station. Both Dal Po and Bum Jo are concerned about In Ha, who is fine. Only In Ha shows concern for Yoo Rae, who is fine. I love the Dal Po unconsciously betrays that In Ha is his number one concern. Love that he took her hand moved in front of her to block Santa.

Chan Soo informs our foursome Santa is a single dad raising a teenage son. The status backpack was too expensive. His son was being bullied for his plain backpack. The dad took the Santa job to earn extra income to buy the backpack. Bum Jo’s department store has exclusive rights to the bag. Santa took one of the bags and gave it to his son. Let me say, that single dad Santa seems like a man that would not attack In Ha. Maybe the shoe to the head was the last straw of indignities.  Bum Jo asks them not to do the story, he does not want his mother upset by bad press.

Christmas Eve Dal Po and Chan Soo go out drinking. Dal Po gets drunk and snatches snacks for the family. Chan Soo piggybacks Dal Po home to Grandpa’s house. Dal Po cutely offers the snacks to a surprised and pleased Grandpa. Lovely dream sequence between Dal Po and In Ha…palpable tenderness and longing between them…or was it real? 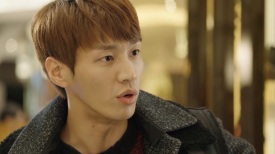 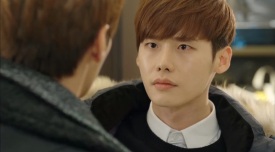 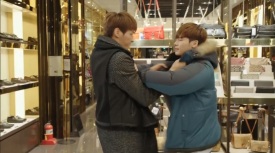 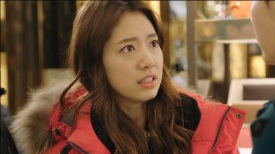 A story is a story and Dal Po and Yoo Rae set out to interview the department store workers. Dal Po and the YGN film crew pretend to turn off the camera when the store worker requests it but secretly keeps filming. Bum Jo interrupts this as he and the MSC crew arrive. Things get heated between Dal Po and Bum Jo until the camera folks followed by In Ha breaks them up. In Ha admonishes Dal Po that he only knows half the story and he has already judged Bum Jo’s mother harshly. Several times, In Ha has been the most fair minded reporter of the bunch. 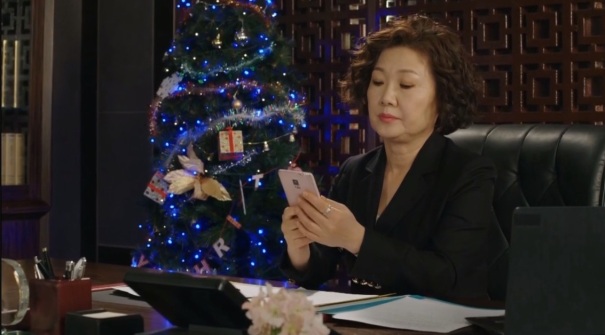 Meanwhile we see the secret texter and friend to In Ha’s mother is Bum Jo’s mother.

We end the episode with our Dal Po and In Ha wordlessly confirming they still care for each other: 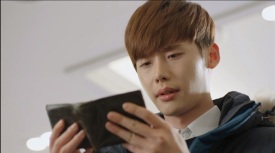 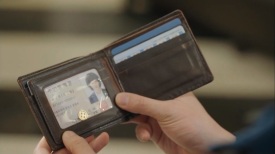 Dal Po still has the button In Ha used to wear around her neck as a symbol of their relationship.

In Ha’s father is wearing the shirt the button is from. Grandpa notices the shirt missing 2, not 1, button. 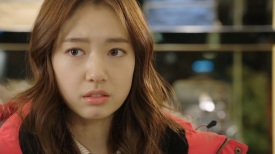 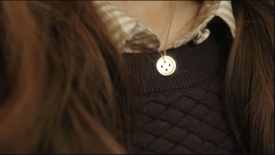 In Ha is wearing the 2nd button around her neck as a symbol of their relationship. Cute!

Comments:
* In Ha is the best reporter of the bunch. Dal Po is consistently guilty of jumping to conclusions based on only part of the story. Yoo Rae and Bum Jo do the same. The Santa story seemed a bit weak to generate conflict between Dal Po and Bum Jo. Interesting that Bum Jo’s mother is the adviser to In Ha’s mother via text.
* Consider me a fan of Grandpa. Grandpa visited Dal Po and offered his support and refused to be shut Dal Po out like Dal Po was doing to him. Well done Grandpa. It really makes little sense to me why Dal Po cannot live with Grandpa et all during his “revenge quest” especially since In Ha’s mother resigned.
* When Dal Po walked the revolving door while thinking, this was a direct nod to “I Hear Your Voice”. Music very similar, if not the same, to “I Hear Your Voice” played in the background.
* Lee Jong Seok’s makes me feel Dal Po’s longing for In Ha. At this point, their estrangement seems unnecessary. I do not like that Dal Po has elected to separate from his family during his revenge quest. Why must he continue to reject the family and hurt himself and them? Moving on, I liked the male posturing between Dal Po and Bum Jo. Dal Po says he is broken up with In Ha. Bum Jo is correct when he told In Ha that Dal Po makes her feel bad and he would not do that. If I have not made myself clear, I dislike the writer’s choice in this plot point. Dal Po should update his driver’s license photo (he is sporting the bad wig in the photo). Finally, the dream sequence (or was it real?) between Dal Po and In Ha was lovely.
* Park Shin Hye continues to impress as the forthright In Ha. In Ha silently supported Dal Po’s pursuit of his mother and that support encouraged him to do the right thing. In Ha is the best reporter of the foursome. She looks at things in a more unbiased manner. Consider me a fan of the Pinocchio syndrome as In Ha was forthright with Bum Jo that she could not date him. Whether he will listen to her (as most second leads do not listen to the leading lady when they tell them they have no chance) remains to be seen.
* Bum Jo tried to stake a claim on In Ha. She rejected his offer of a relationship. Will he stop trying? It made since that he would try to protect his mother’s reputation in the backpack story. My hats off to Bum Jo for correctly telling Dal Po his treatment of In Ha was unfair and unkind. I agree!
* Yoo Rae now thinks Dal Po is cute. This character is the weakest of the four. She is kinda like a yappy dog that you ignore but they keep yapping.