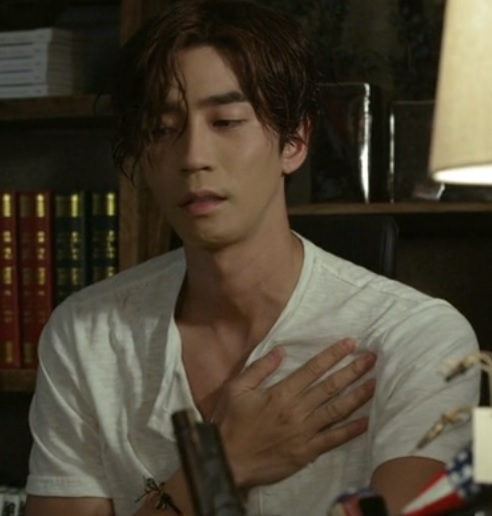 In the last episode trot singer Choon Hee (Jung Eun Ji) was driven home Shine Star record company interim President Jo Geun Woo (Shin Sung Rok). He drives away and notices that Choon Hee left her cell phone in the car. He walks back to her apartment. He is totally surprised when he sees Choon Hee and her manager Jang Joon Hyun (Ji Hyun Woo) going up the steps to the apartment. In Geun Woo’s eyes it looks like they are living together (which they are though it is platonic). He is dismayed and hurt because he likes her.

The next morning Joon Hyun and Byul race to the vegetable patch stoked the lettuce is growing well. Joon Hyun reminds Byul about paperwork (kinda like a Dad would). Choon Hee smiles at the warm relationship between the tall man and the little girl.

At work Geun Woo returns Choon Hee’s cell phone and as a thank you he invites himself to dinner to Joon Hyun’s dismay. Choon Hee cleans the apartment and sends Joon Hyun to buy groceries for dinner. Then she kicks him out and tells him to return in a couple of hours! Joon Hyun hides when Geun Woo comes to the house. It drives him crazy when he imagines Geun Woo making advances on Choon Hee. Dinner is going well and Byul asks Geun Woo to eat with them often. Geun Woo tells Byul that her sister refused to date him. Can she help him convince Choon Hee to date him? Knock, knock! Choon Hee rushes to the door only to find Joon Hyun who muscles his way in and joins the dinner. It gets awkward as Joon Hyun hogs the food and excludes Geun Woo from conversation.

After dinner Geun Woo pointedly asks Joon Hyun if he’ll be leaving too. Outside the door Geun Woo says his goodbyes and practically has to move Joon Hyun down the steps. It is an amusing scene between the two men. As they walk away, Joon Hyun tells Geun Woo that is doesn’t look good for the Shine Star President to personally visit a singer in his company. Geun Woo tells him he isn’t there as the President but as a man that likes Choon Hee. Unbeknownst to both men, President Jo (Geun Woo’s father) watches the interchanges and frets a love triangle may be on his hands.

When Joon Hyun returns home Choon Hee chastises him for coming home during dinner but he won’t hear it and goes to his home shutting the door in her face refusing to talk to her.

The next morning Joon Hyun stares at Choon Hee wondering WHAT makes her attractive. Choon Hee catches him staring and asks what is up with him? He’s been weird since last night.

Byul sees that Choon Hee’s album is number three on the charts. They are all thrilled. What a cute little family they make.

Choon Hee goes on interviews with Joon Hyun watching as her manager and cringing sometimes at her naive or literal answers to the questions. Choon Hee is thrilled when Geun Woo provides her a company car to drive to her engagements. Joon Hyun frets over her throat, her drinks, just like a concerned caring person would. Joon Hyun enlists Tae Song (ex-manager) to teach him to drive. It is nerve wracking for both men. Choon Hee shoots an ad for a product and the model gets a bit closer and friendly than she or Joon Hyun like. When the product ad photos are posted at Shine Star Soo In is dismayed, SHE was to be the singer for that product. Her manager gives her that bad news that another event that she was lined up for has switch to Choon Hee. Soo In’s mother is NOT happy that Choon Hee is stealing her daughter’s limelight. Director Kang offers Soo In words of encouragement.

Choon Hee gives Joon Hyun a gift of a jacket she bought for him. He is like a little kid with a Christmas gift!

Outside the apartment he spots President Jo who calmly informs him he lives in this apartment complex. Joon Hyun reminds him that if Choon Hee’s album makes it to number one, he will produce his comeback album.

The next day mean girl “Miss Ballad” goes to meet the “God of Trot” (Tae Song). When she sees Tae Song at the restaurant she doesn’t realize that he is the “God of Trot” and he doesn’t realize she is “Miss Ballad” until he serves her the food and she realizes the man she is talking on the phone with is the man right in front of her. Kinda cute scene. 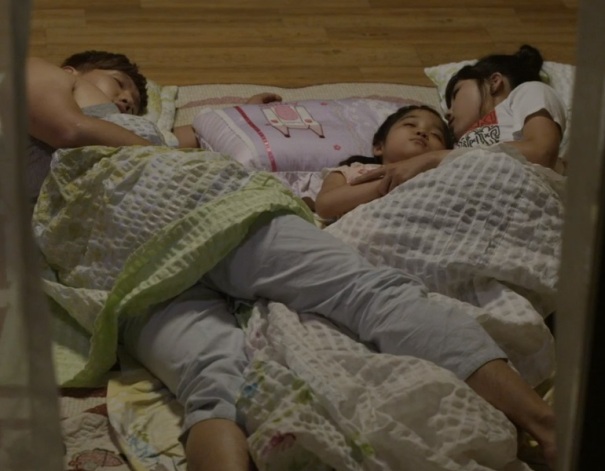 That evening it is hot in the apartment. Choon Hee and Joon Hyun argue over the single fan in the house. The compromise is to sleep as a family on the living room floor. Unbeknownst to them, someone takes photos of Joon Hyun, Byul, and Choon Hee sleeping together like one happy family.

The next day Soo In invites Geun Woo out but he declines her offer. Instead he takes Choon Hee horsebacking riding. As they walk back to the stables Geun Woo says he is patient man and that he knows how to wait for what he wants and he looks pointedly at Choon Hee. They have dinner together. Geun Woo graciously offers to have a dinner boxed up for Byul. Choon Hee asks for a second dinner in case she gets hungry later. Geun Woo realizes the second dinner is for Joon Hyun.

The next day at the beauty parlor Soo In and her mother hear that Geun Woo took a girl riding. Neither woman is happy about that. At work, Soo In tells Choon Hee she is dangling both Joon Hyun and Geun Woo using them to advance her career but not caring about either. Irritated she starts to tear down the pictures of Choon Hee but Joon Hyun stops her. He tells her she cannot take down Choon Hee’s pictures. Soo In barks Choon Hee, Choon Hee, Choon Hee, I’m so sick of hearing about her. This totally reminds me of the sibling rivalry moment from the Brady Bunch when young sister Jan exclaims about older sister Marsha “Marcia, Marcia, Marcia” (check out the video clip). She drops the bomb that Choon Hee and Geun Woo are dating. She tells him they went horseback riding yesterday. Joon Hyun is stunned.

Director Kang tells Soo In’s mother there are pictures showing Joon Hyun, Byul, and Choon Hee sleeping together like one happy family. Unbeknownst to them the photographer is also showing Geun Woo the same photos. Highest bidder gets the pictures and Geun Woo “wins”. That evening he waits outside the apartment to talk to Joon Hyun. He tells Joon Hyun he knows he lives with Choon Hee and he personally does not care. However professionally it is a problem. He produces the photographs. He notes the Joon Hyun should know better than anyone how scandal can destroy a career. He tells Joon Hyun to move out. You can see he is thinking about it.

The next morning Geun Woo confronts Soo In’s mother about buying scandalous pictures about a singer from the company. She in turns asks why he favors Choon Hee. He admits he likes her and warns her to stay out of Choon Hee’s business. At a performance Choon Hee’s father gives Joon Hyun a gift for her saying he’s a fan. At home, when she opens the gift it has a note from her father. Joon Hyun can’t believe he did not recognize her father. That night Choon Hee stares at the family photo and asks for his help getting her father back. In his bedroom, Joon Hyun recalls his scandals and resolves that he cannot mess up Choon Hee’s chance. The next morning he tells President Jo he is resigning as Choon Hee’s manager. President Jo cannot believe he is willing to give up his chance at a comeback album when he’s so close. Joon Hyun claims he does not want that anymore. He calls our favorite debt collectors to take over as Choon Hee’s manager giving them detailed dos and don’ts. He claims he needs to focus on his own music and he’s done all he can for her.

Joon Hyul takes Choon Hee for a lovely day at his “special place”. They play with musical instruments, eat, shop, and sing a song together while watching the beautiful countryside. He tells her she’ll be successful no matter what. They go home, cook and eat dinner with Byul. It is sweet and nice their “family” time. What do you do after a beautiful day together? Why you break the other person’s heart and tell them you are moving out and on. Joon Hyun says it is time to get back to his own musical career and he doesn’t have time to do that as her manager. He admits he only became her manager so he could get his comeback album made. He said he wasn’t with her because he like her (ouch!). She is stunned and sad. What’s with the important men in her life deserting her?

The next morning they see Byul off to school and head to the radio station for their first appointment of the day. Choon Hee makes a point to Joon Hyun that he needs to be in the studio cheering her on while she’s doing the show. She sings a love song. It’s accapella and quite pretty. Is she singing for Joon Hyun? When she’s done with the show he is gone. 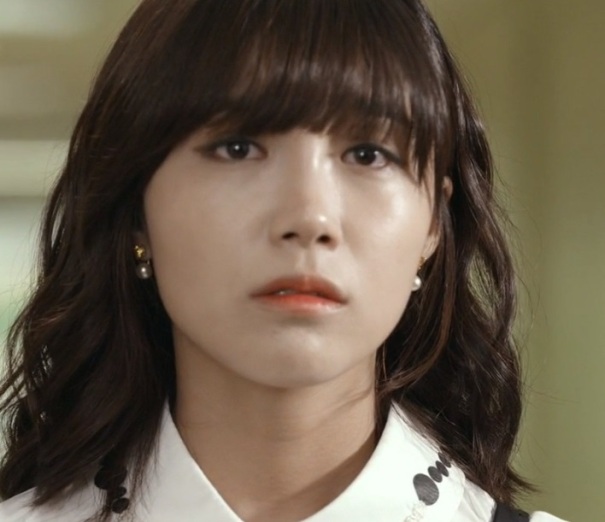 She walks down the hall with a sad look on her face. 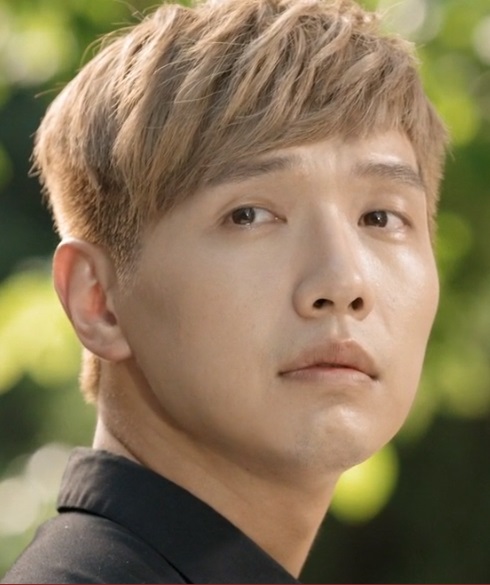 We see Joon Hyun rolling his suitcase away from the apartment with a sad look on his face.

Comments:
* Good episode again! The production and writing has found a rhythm and last two episodes have hummed along.
* Choon Hee and Joon Hyun were all kinds of cute. She’s been so busy surviving and focused on her career that she isn’t swooning romantically over Joon Hyun but she is comfortable with him and likes him. She does not know if she LIKES him.
* Of course Joon Hyun HAD to go noble idiot and break away from Choon Hee because it was best for her career for him NOT to live with her. He totally surprised President Jo with the decision, who pointed out that Choon Hee’s album was only 2 slots away from number 1 then Joon Hyun’s comeback album would be produced. I knew when Joon Hyun spent the wonderful day with her that he’d pull the rug out from underneath her. This move is a kdrama staple; give the person you are about to ditch a fantastic day with you so your departure hurts even more! I do not like noble idiot moves and consider it sloppy story telling though a majority of kdramas use this plot device.
* Of course Geun Woo HAD to tell Choon Hee he’d wait for her. Second leads tend to bug me once they see the object of their affection is NOT really into them but give the patented answer “I will wait for you.” Geun Woo crossed that line tonight.
* Byul and Joon Hyul are darling. How on earth will he manage to stay away from Byul?
* I’m rooting for Choon Hee and Joon Hyun to find a way back to each other. I am curious what’s next for Joon Hyun. He has stepped away from President Jo who was his backer. Can he really make it back into the music business?