Our Vampire Prosecutor finds himself in a bad situation at the end of the episode as the tables are turned on him and he isn’t the prosecutor but the accused criminal. 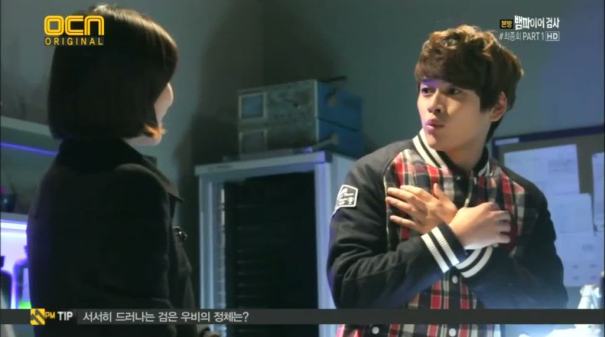 * Jung In’s dogged determination to keep on the case. Tae Yeon tries to force Jung In and Dong Man to take a one week vacation but she won’t fall for that trick. She lamely tries to sweet talk Dong Man into continuing their work on the case. When that does not work she resumes her authoritative style with Dong Man. She and Dong Man determine the location of the warehouse. This turns out to be mass grave central for all the big bad vampire’s victims. Creepy! 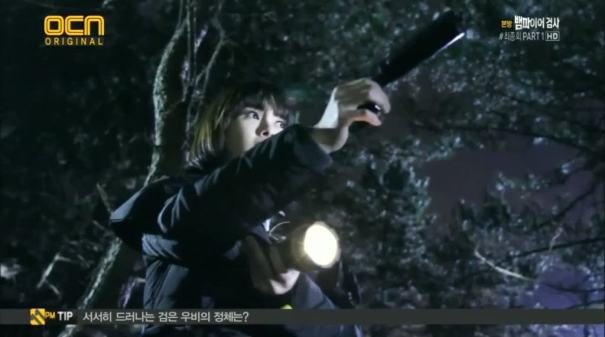 * It totally spooked me Jung In going into the warehouse BY HERSELF. Then when a man shadowed her in the warehouse she chased the mystery man into the wood BY HERSELF. Good grief that took nerves of steel. It was also kinda dumb on her part. Was she really goes to protect herself with a flashlight and what looked to be a flare gun? 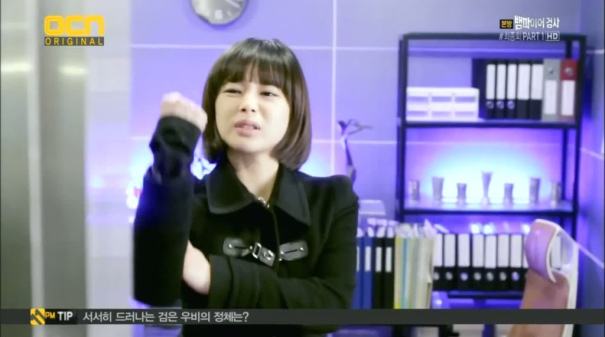 * Nothing says I love you like giving someone the buzz off sign with your arms. Jung In may have feelings for Tae Yeon but she does not like being ordered around, cut out of an investigation or marginalized. 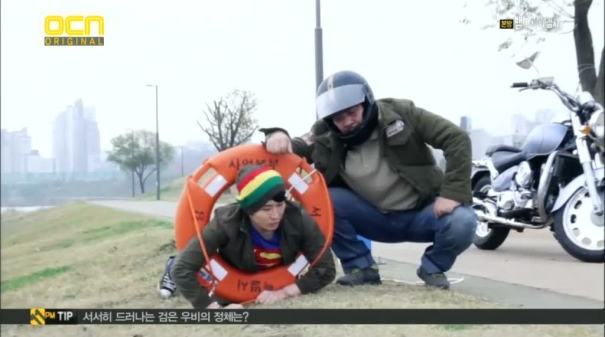 * Soon Bum’s interrogation at the river was unique. Soon Bum straps him to a life preserver and rolls him down a hill reeling him back in like a fish. The fact he could not get his helmet off his head was pure entertainment. 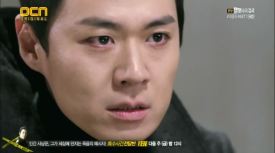 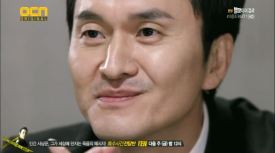 * Tae Yeon finds out Prosecutor Jang is part of the secret law firm. It was no surprise to me that Prosecutor Jang was not a nice guy. The actor must make a living playing smirking bad guys as he was part of the evil quartet in Secret Love Affair. Initially it did surprise me that they purposely framed Tae Yeon. On second thought it makes sense. Tae Yeon was an asset that learned too much, suspected the higher ups, and therefore became a liability.

* When Tae Yeon believed Prosecutor Jang was the big bad vampire I thought that was too quick conclusion. His accuse without evidence methodology had to backfire. Prosecution Jang slipped right out of Tae Yeon’s grasp. More surprisingly the identity of the big bad vampire became less important. This vampire seems to be an eating machine making him less interesting to me. Those around him and their machinations are more interesting.

* I know I mentioned this last episode but Mr. La deflating to nothing is odd and not in a good way. Why does he get remorseful now? His cool factor totally gone. 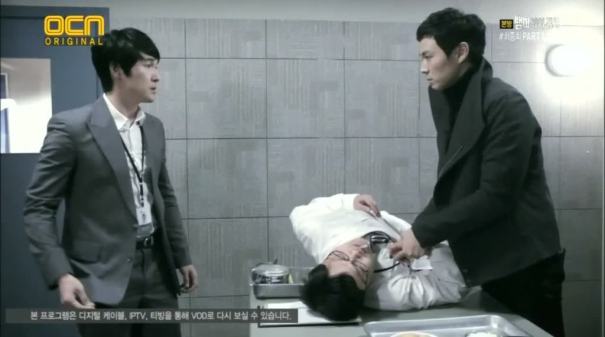 * Finally Tae Yeon  being framed for the lady lawyer’s murder (big bad vampire killed her) certainly came as a surprise to him. I like how he waited and made his escape when he created an opportunity.

* Only 1 more episode then this series is a wrap. Will Tae Yeon be permanently on the run from the law? Will his CSI team find him innocent?