I Hear Your Voice Episode 9 Recap

EPISODE 9: “If in difficult days even you go away” 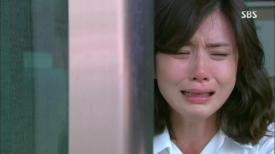 I was not over excited about watching this episode because I did not want to see Mom Murderer be acquitted. So annoying to see the guilty beat the justice system. The pain Hye Sung felt after the verdict was tangible along with her hot angry sad tears.

I liked the way the episode started with Hye Sung in the hospital after being stabbed Su Ha. You could see the shift in her concern and caring towards Su Ha and away from Kwan Woo. It would be difficult to be around Kwan Woo, the lawyer that got your Mom’s Murderer acquitted. 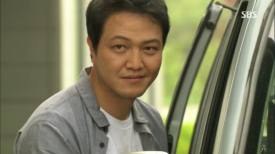 The happiness and smirking grin Mom Murdered sported was irritating beyond belief.

I liked the mystery of Mom Murderer’s cellmate that couldn’t fully perjure himself. When Lawyer Shin tells him that the Prosecutor is Judge Seo’s daughter, his reaction at the mention of Judge Seo lets you know there more to the story. Did the Judge falsely imprison him? If so, why?

You knew Su Ha would go after Mom Murderer. I was not surprised that he elected to go after him solo though that was a stupid choice. And I hate to say it but Mom Murderer was right when he told Su Ha that he would win if Su Ha murders him OR if he murdered Su Ha. Mom Murderer would achieve his goal of destroying Hye Sung by Su Ha’s death OR Su Ha becoming a murderer himself.  The fight, stabbing of Hye Sung, was bloody and believable. When Kwan Woo sees Mom Murderer’s face bloody and smirking he fully realizes HE unleashed this on Hye Sung because he believed Mom Murderer over her.

When Su Ha visits Hye Sung in the hospital and whispered something to her, it could only be a promise NOT to murder. She had clearly told him “If you kill that man, you stop being a victim and become a murderer” then coupled with the fact HE stabbed HER, the woman he loves…he had to honor her demand and walk away.

1 year later….
*Fitting that Hye Sung reverts to the non-caring lawyer she was at the beginning of the show.
*Fitting that she still sent texts to her mother telling her she missed her or had a bad day.
*Fitting that Prosecutor Do Yeon tried to provoke Hye Sung by saying that beating her in court every time was boring.
*Fitting that SHE pursues guys that look like Su Ha only to be disappointed the man in question is not Su Ha. The tables have turned on that relationship. 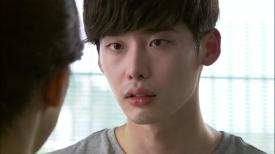 When Su Ha is found and it is revealed that he has amnesia I thought this may one of the few times I LIKE amnesia used in a story. Often amnesia is a crutch used when a writer is at a loss of what to do. But here it feels like a solid choice. It may continue to force a new relationship between Su Ha and Hye Sung, one with a more even footing.

I hope I don’t see Mom Murderer next episode. I’m tired of his smirking face.