Angel Eyes episode 2 is the last episode with the younger actors before switching to the adult actors.

In this episode we learn more of the backstory…how she came to get the eye surgery…how they were separated.

The episode begins with blissful young love. Dong Joo suprises Soo Wan with a bungee jump for her birthday. Dong Joo and Soo Wan do have a cute factor.

Soo Wan gets the news that a potential eye donor has been found. Maybe she’ll have the surgery to restore her sight. But alas the donation does not happen. She is disappointed and cries out her frustration and sadness to Dong Joo’s mom. His mom declares she would give her eyes to Soo Wan if she could. Oh no, my Korean drama spidey sense tingles at this statement.

One early morning he is too sick to deliver the porridge so Mom does the morning deliveries. She barely misses being hit by a truck. Whew, dodged that bullet. Then wham a car hits her full on and speeds off without stopping.

Mom is whisked to the hospital and Dong Joo rushes to her side. She needs surgery and she asks Dong Joo to promise her two things should she not survive the surgery: 1) take his little sister to America to get the surgery she needs and 2) give her eyes to Soo Wan.

Soo Wan’s Dad (the surgeon) learns that Dong Joo’s Mother has specified her eyes to go Soo Wan. He’s tempted to not save her during the operation but fights off this thought and performs the surgery. Things look good for Dong Joo’s Mom. But wait there’s more, evil guy is talking to someone on the phone saying she survived the surgery and may be able to identify the hit and run driver. Evil guy receives directions to kill Dong Joo’s Mom which he accomplishes by injecting something in her IV. Soo Wan’s father desperately tries to save the flat-lining Mom but to no avail. Dong Joo witnesses Soo Wan’s Dad doing all he can to save his mother and is grateful.

Soo Wan receives the good news there is an eye donor and heads to the hospital to get the surgery. Dong Joo retrieves his cell phone from his house, listens to Soo Wan’s message that she is heading into surgery and rushes to the hospital to be by her side. Unfortunately he just misses her as she goes into surgery. Soo Wan’s father observes the passion the Dong Joo has to reach his daughter’s side and recalls Soo Wan telling him that she liked someone.

After the surgery Dong Joo sits by Soo Wan’s bedside telling her he must leave for America. He writes her a note explaining things. Soo Wan’s father overhears and confiscates the note (why he wants to separate them is not explained). 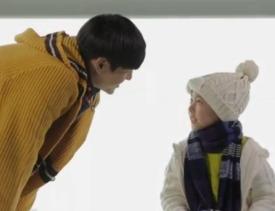 Soo Wan wakes up and tries to leave the hospital to find Dong Joo but Dong Joo and his sister are at the airport departing for America. Dong Joo hopes that Soo Wan will wait for him.

Soo Wan blows the whistle Dong Joo gave her. Dong Joo said it was the most precious item he owned. He’d told her she’d only have to blow on the whistle and he’d always come running to her. Soo Wan is devastated that Dong Joo has deserted her, the one thing she asked he never do.

The episode ends with the adult Dong Joo back in Korea biking to her house. Memories of doing in his younger days flood his mind and the episode ends.

Had to turn my brain off for the kdrama cliche plot devices that were used – his Mom dies, her Dad hides the his note and never tells her about her Dong Joo’s efforts to see her and explain why he must leave, Dong Joo did NOT contact Soo Wan while his mother was in the hospital OR during the funeral – that was a bit ridiculous. Yes I know his cell was at his house, but I think he could have used a hospital phone or borrow a cell to let her know about his Mother’s death.

I’ll be curious to see if the adult characters grab me. The younger actors were fine but the story hasn’t really pulled me in.